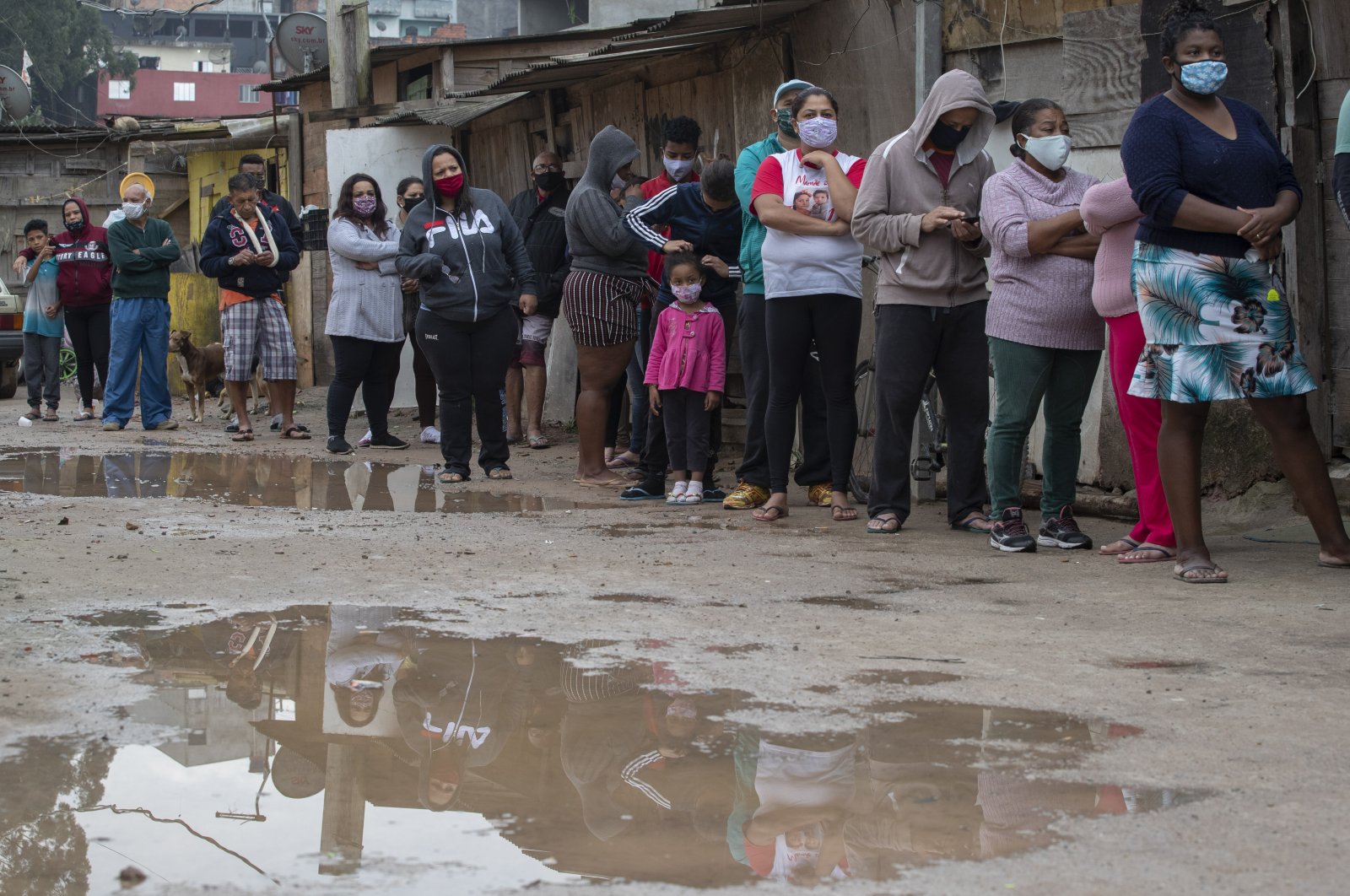 Locals wearing face masks to avoid the spread of COVID-19 wait in line for medical assistance from Doctors Without Borders at a squatters camp in Sao Bernardo do Campo, Sao Paulo, Brazil, June 3, 2020. (AP Photo)
by Compiled from Wire Services Jun 05, 2020 1:19 pm
RECOMMENDED

Brazil's death toll from the coronavirus surpassed Italy's to become the third-highest in the world Thursday, as the U.N. secretary-general called for a "people's vaccine" to stem the pandemic.

The bleak figures from Brazil underlined the grim toll the virus is taking in Latin America, the latest epicenter in the pandemic, even as Europe seeks to reemerge from a lockdown, including with a massive new 600 billion-euro ($674 billion) economic stimulus measure announced by the European Central Bank (ECB). But on the medical side, the outlook remains blurry.

Even as researchers around the world race to develop and test vaccines, new, sometimes contradictory, information on the virus continues to emerge.

In the latest case, the medical journal The Lancet retracted a study that raised safety fears about hydroxychloroquine, a drug touted by U.S. President Donald Trump as a treatment for COVID-19, after the paper's authors said they were no longer confident in underlying data provided by a Chicago-based health care analytics firm.

The paper had led the World Health Organization (WHO) to suspend clinical trials of the drug, and its retraction added fuel to a politically charged debate over how to respond to the pandemic.

Since emerging in China late last year, the virus has infected at least 6.6 million people, killed more than 390,000 and wreaked havoc on the global economy by forcing millions to stay inside their homes. Brazil reported a new 24-hour record death toll, bringing the total number killed to more than 34,000. That is behind only the U.S., with more than 108,000 deaths, and Britain, with nearly 40,000.

Brazil is the hardest-hit country in Latin America, though the tolls are also rising sharply in Mexico, Peru, Ecuador and Chile. Mexico reported a record number of new infections for the second straight day, with 4,442. And in Peru, desperate residents lined up to buy oxygen tanks for their loved ones, as the government declared oxygen a "strategic health resource" amid an acute shortage.

Meanwhile, in other parts of the world, India and South Africa have seen their largest daily jumps in new coronavirus cases. India on Friday registered more than 9,800 new cases of the coronavirus in another biggest single-day spike. The Health Ministry said the total number of confirmed cases had reached 226,770 with 6,348 deaths, 273 of them in the past 24 hours. The overall rate of recovery is around 48%. There has been a surge in infections in rural areas following the return of hundreds of thousands of migrant workers who left cities after the lockdown in late March.

South Africa has the most virus cases in Africa, where the total number is now above 163,000. The continent still represents less than 3% of the global total of cases but South Africa and Egypt are hot spots, and Nigeria, Africa’s most populous country, is another growing concern with more than 11,000 cases and relatively little testing for the virus. Shortages of testing and medical equipment remain a challenge across the 54-nation continent, where just 1,700 tests are being carried out per 1 million people.