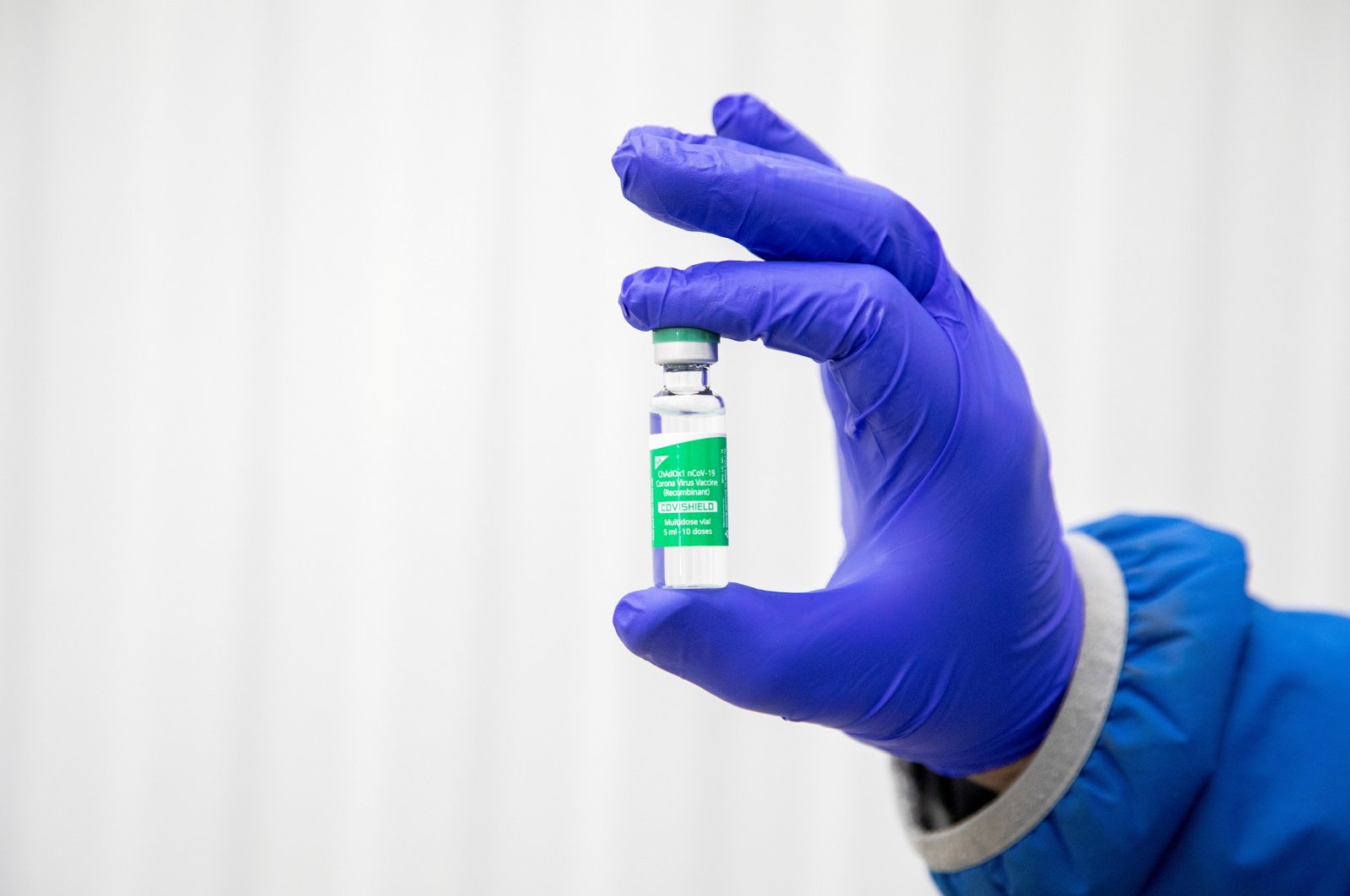 A vial of some of the first 500,000 of the 2 million AstraZeneca coronavirus disease (COVID-19) vaccine doses that Canada has secured through a deal with the Serum Institute of India in partnership with Verity Pharma at a facility in Milton, Ontario, Canada, March 3, 2021. (REUTERS)
by ASSOCIATED PRESS Mar 16, 2021 5:46 pm
RECOMMENDED

Canada has lagged on vaccinations since it relies on the global supply chain because the United States hasn't allowed vaccine exports to Canada.

"Our best friend and neighbor, the United States, has a Pfizer vaccine plant in Kalamazoo, Michigan. I can shoot a puck from Kalamazoo and hit Ontario, yet we’re not getting our Pfizer vaccine from them," said Dr. Isaac Bogoch, an infectious disease scientist at the University of Toronto.

Canada once was hailed as a success story in dealing with the coronavirus pandemic, faring much better than the United States in deaths and infections because of how it approached lockdowns. But the trade-dependent nation has lagged on vaccinating its population because it lacks the ability to manufacture the vaccine, like many other countries.

With no domestic supply, Prime Minister Justin Trudeau’s government bet on seven different vaccines manufactured elsewhere and secured advance purchase agreements, enough to get 10 doses for each of Canada's 38 million people. Regulators have approved the Pfizer, Moderna, AstraZeneca and Johnson & Johnson vaccines. While acquiring them has proven difficult, that gamble appears to be about to pay off. Although Canada's economy is tightly interconnected with the U.S., Washington hasn't allowed the hundreds of millions of vaccine doses made in America to be exported, and Canada has had to turn to Europe and Asia. The vaccine supply chain difficulties have forced Canada to extend the time between the first shot and the second by up to four months so that everyone can be protected faster with the primary dose. The hope is to get all adults at least one shot by the end of June.

"It’s not just Canada that is experiencing turbulence. The entire globe is undertaking the largest mass vaccination campaign in its history with completely new supply chains,” Procurement Minister Anita Anand said in an interview with The Associated Press. According to the World Health Organization, nearly 80% of the vaccines manufactured so far have been administered in only 10 countries. Canada ranks about 22nd in the number of doses administered, with about 8% of the population getting at least one shot. That compares with 36% in the U.K, 21% in the U.S. and 8% in the European Union. Chile, which like many countries has turned to China, has vaccinated 25% with at least one dose. The "insatiable global demand” for vaccines has forced the competition against bigger economies like the EU, the U.K. and the U.S., Bogoch said, "and on top of that you are also competing in an environment where there’s protectionist laws.” Overall, Canada has weathered the pandemic better than most countries in per capita deaths and infections. More than 530,000 Americans and 125,000 U.K. citizens have died, compared with just over 22,000 in Canada. But not having rapid access to vaccines could be costly amid a surge in variant COVID-19 cases. The financial capital of Toronto largely remains on lockdown.

"There will be a fair amount of envy as Canadians wait and watch Americans with substantially more freedoms,” said Dr. Andrew Morris, a professor of infectious diseases at the University of Toronto. Amr Bannis, 69, of Toronto, blamed the government for driving pharmaceutical companies from the country. But he also understands why the U.S. would focus on its own, saying the problem there "is much more serious than ours.” Added Jim Vlahos, 45, also of Toronto: "I don’t fault America for looking out for their citizens first, but if they want to open the border, we can’t be at such a huge disadvantage with supply.” He said "it would go a long way to mend fences between our countries if America looked to Canada first to assist with supply of vaccines.” Elizabeth Harris, 83, of Fenelon Falls, Ontario, had been scheduled for a second shot April 7, but she and her husband have been told by the health department it will be another four months.

"I’m a little annoyed because I’ll be 84 and I was looking forward to having my second shot,” Harris said. "It’s ridiculous because we’re over 80 and we’re among the most vulnerable, but we have to wait four months." The elderly in long term care homes have received two shots, but the vast majority in the general population haven't. President Joe Biden said he wanted to ensure that "Americans are taken care of first, but we’re then going to try to help the rest of the world.” Biden has directed that all U.S. states make all adults eligible for doses by May 1 and expects to have enough supply for every adult American by the end of May. The White House has said that once U.S. citizens are vaccinated, the next step is ensuring Canada and Mexico are able to manage the pandemic so the borders can reopen. That could mean more vaccines for Canada in June and a shorter wait for second doses. Canada’s National Advisory Committee on Immunization had recommended the four-month delay between doses after data from the U.K. and Quebec showed a good level of protection offered by the first shot.

The U.K. has instituted a similar delay. The National Advisory Committee on Immunization on Tuesday changed its recommendation on the AstraZeneca vaccine and will now allow those over 65 to get it after initially saying there was not enough data to allow for that. Canadian health authorities continue to say AstraZeneca is safe, a day after many European countries suspended its use over reports of dangerous blood clots in some recipients. The company and international regulators say there is no evidence the shot is to blame. Canada has placed bigger bets on Pfizer and Moderna, ordering up to 76 million doses of Pfizer and up to 44 million of Moderna, compared with up to 20 million of AstraZeneca.

In the meantime, deliveries have begun to ramp up in Canada. Based on a new schedule, it will receive at least 1 million Pfizer doses a week from Europe from March 22 to May 10, Trudeau said Friday. "That’s going to make a big difference,” he said. By the end of March, Canada will have received up to 8 million doses overall, up from 6 million, he said, and it expects to have more than 36.5 million doses by July. Part of Canada's slow start was because Pfizer's plant in Belgium reduced its shipments in January and February, and halted deliveries entirely for a week at one point as it upgraded the facility to scale up production. That delay took a toll on Trudeau's popularity.

Earlier this month, a shipment of more than a quarter million AstraZeneca doses destined for Australia was blocked from leaving the EU. Anand, the procurement minister, said Canada has been assured by the bloc that Pfizer and Moderna deliveries won’t be disrupted. She said the "vaccine nationalism” in Europe and the U.S. contributed to the competitive global environment and instability in the supply chain, but noted the "accelerated pace that Canada is going to be traveling now.” "In our initial agreements with our vaccine suppliers, we were very conscious to diversify the supply chains at the time,” Anand said. Ontario Premier Doug Ford expressed irritation with Washington's refusal to ship vaccines north of the border, saying he’d hoped for a change of stance from former President Donald Trump but it remains "every person for themselves.” Ford had asked Biden for 1 million doses from the Pfizer facility in Michigan. Canada also has not been getting any supplies from Russia and China, which have used their domestically-produced shots for strategic diplomatic leverage. Beijing has pledged roughly half a billion doses to more than 45 countries, according to a tally by The Associated Press. None are going to Canada, with relations between the two countries strained after Canada arrested a senior Chinese technology executive on a U.S. extradition request. Once Canada has fully vaccinated its citizens, Anand said excess supplies will be donated to developing countries. In the meantime, residents like Bannis said he is OK with the delay of the second dose. "Tactics to expand coverage but targeting the high-risk population should prove successful,” he said.