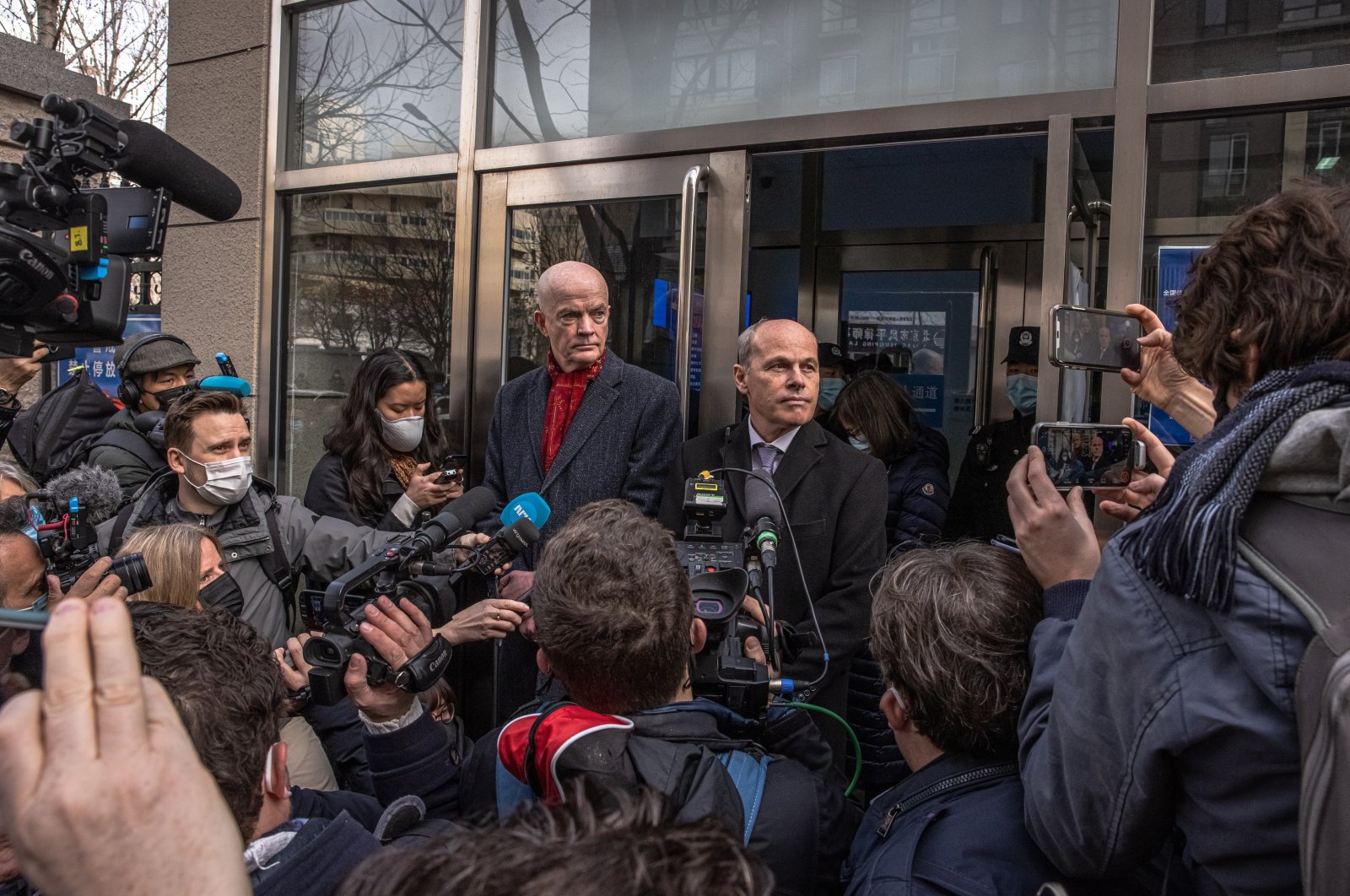 Jim Nickel (C-R), deputy head of the Canadian embassy in Beijing and William Klein (C-L), acting deputy chief of the U.S. Embassy in Beijing, speak to the media at the entrance to the Intermediate People's Court in Beijing, China, 22 March 2021. (EPA Photo)
by Reuters Mar 22, 2021 9:34 pm
RECOMMENDED

The trial of Canadian Michael Kovrig, who has been under Chinese custody for more than two years on espionage charges, wrapped up in a closed Beijing courtroom on Monday with the verdict to be announced at an unspecified later date, according to state media.

Beijing insists the detentions are not linked to the detention of Meng, who remains under house arrest in Vancouver as she fights extradition to the United States. Beijing has repeatedly called on Ottawa to release her.

She has been fighting the extradition request, and those hearings are expected to wrap up in May in the British Columbia Supreme Court.

The Kovrig trial came just days after the United States raised concerns over the cases at tense talks with China in Alaska. On Monday, Canadian and other diplomats were denied access to the hearing.

William Klein, charge d'affaires of the U.S. embassy in China, told reporters outside the courthouse as he stood beside his Canadian counterpart that the United States would treat the cases of the two men "as if they were American citizens."

Canadian Foreign Minister Marc Garneau said "the eyes of the world are on these cases" and thanked international partners for their support.

In a show of solidarity, 28 diplomats from 26 countries, including the United States, Britain, Germany, Australia, Netherlands and the Czech Republic, turned up outside the Beijing No. 2 Intermediate Court on Monday, where there was a heavy police presence.

"We are deeply troubled by the total lack of transparency surrounding these hearings and we continue to work towards an immediate end to their arbitrary detention," Garneau said in a statement.

China's state media outlet CCTV reported that Kovrig and his lawyer were in court and that the verdict, like the one for Spavor, who was tried on Friday, would be announced at a later date.

"We've requested access to Michael Kovrig's hearing repeatedly but that access is being denied" for national security reasons, Jim Nickel, charge d'affaires of the Canadian embassy in China, told reporters outside the Beijing court. "Now we see that the court process itself is not transparent. We're very troubled by this."

Nickel said Canada would protest the lack of access to China's foreign ministry.

"We are here to show solidarity. Arbitrary detention is not the way," a diplomat told Reuters, declining to be named as she was not authorized to speak on the record about the trial.

The Canadian side had assembled a group of diplomats to "point fingers" and was "wantonly interfering in China's judicial sovereignty," said Chinese Foreign Ministry spokeswoman Hua Chunying.

Some diplomats took off their face masks as they posed for a group photo outside the court, with each shouting out which country they represented to help reporters identify them.

On Friday, Spavor, a businessman, also stood trial in a closed courtroom in the northeastern city of Dandong.

Separately on Monday, the European Union imposed sanctions on four Chinese officials for human rights abuses in Xinjiang, to which Beijing responded with its own sanctions on Europeans.

Canada, the United States and the U.K. imposed similar sanctions later in the day, with Canada saying there was mounting evidence of "systemic, state-led human rights violations" in Xinjiang.

Amid the wave of diplomatic activity, observers have said the likely convictions of the two men could ultimately facilitate an agreement in which they are released and sent back to Canada.

Chinese courts have a conviction rate of over 99%.

"Their detention is profoundly unjust and our focus must remain on securing their freedom."