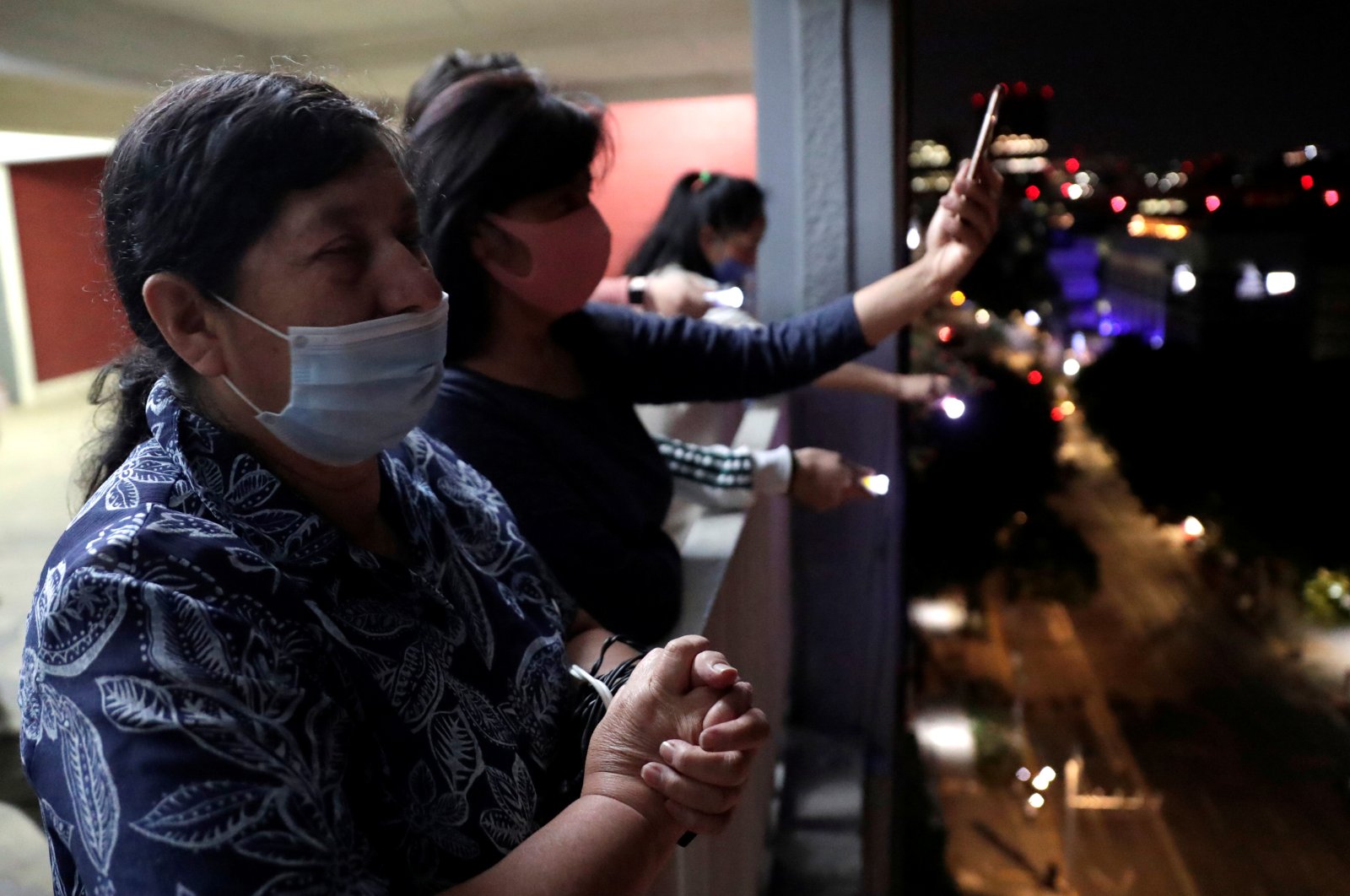 Mexicans join a nightly singing of "A Song of Joy" to express their admiration for medical staff, who are fighting the coronavirus disease (COVID-19), after the Mexican government declared a health emergency and issued stricter regulations to contain the spread of the coronavirus, in Mexico City, Mexico April 26, 2020. (Reuters Photo)
by REUTERS Apr 27, 2020 3:06 pm
RECOMMENDED

Lockdowns around Latin America are helping slow the spread of COVID-19, but are having a darker and less-intended consequence: A spike in calls to helplines suggests a rise in domestic abuse, in a region where almost 20 million women and girls suffer sexual and physical violence each year.

In cities from Buenos Aires to Mexico City, Santiago, São Paulo and La Paz, families and individuals have been confined in their homes in an unprecedented way, often only allowed out for emergencies or to shop for essentials.

Prosecutors, victim support teams, women's movements and the United Nations all say this has caused a rise in domestic violence toward women. They cite increasing numbers of calls to abuse hotlines.

In some countries, like Mexico and Brazil, there has been a rise in formal reports of abuse, while in others, including Chile and Bolivia, there has been a drop in formal complaints. Prosecutors and U.N. Women said the latter was likely not due to a decline in violence, but because women were less able to seek help or report abuse through normal channels.

"The jump in violence has not surprised us, it is the unleashing of a violence that was already there in people," said Eva Giberti, founder of the Victims Against Violence program in Argentina, who helps runs a hotline for women to report abuse.

"Under normal social circumstances that had been limited to some degree."

Argentina's emergency 137 line for abuse victims, supported by the justice department, has seen a 67% rise in calls for help in April versus a year earlier, after a nationwide lockdown was imposed on March 20.

U.N. Women in a report on Wednesday said there was evidence of rising violence against women in Mexico, Brazil, and Colombia, and a doubling in the number of femicides in Argentina during the quarantine, citing a women's observatory in Mar del Plata.

Pre-pandemic, the Argentine government estimates that a woman was killed every 23 hours.

Domestic violence "seems to be another pandemic," said Lucía Vassallo, a film maker whose documentary "Line 137" looks at the issue.

'They dare not go out'

Rising concern over domestic abuse has been global, with fears victims are being silenced in Italy, calls for help from women rising in Spain, and systems to prevent child abuse in the United States hampered by the lockdown.

In Latin America, the fear is that violence against women that was already prevalent is being exacerbated further. The region has seen huge marches and strikes by women over the last year against male aggression and abuse.

"In a situation of confinement, what is happening is that women are locked up with their own abusers in situations where they have very limited outlets," Maria Noel Baeza, regional director for U.N. Women, told Reuters.

"Last year we had 3,800 femicides in the region, how many are we going to have this year?"

In Chile, the women's minister said calls to domestic abuse helplines had increased 70% in the first weekend of quarantine. The government has bolstered counseling channels and looked to keep shelters open for women at risk.

Evelyn Matthei, mayor of Santiago's wealthy Providencia district, told Reuters that calls for help to a local office providing legal, psychological and social help had leapt 500% under the lockdown.

Formal reports of domestic violence, however, actually declined 40% in the first half of April in Chile, according to the national prosecutors' office, which the U.N. and prosecutors said was down to women having their movements restricted.

"This probably has to do with the fact that there is violence within the home but that women cannot go out, they dare not go out," said Matthei.

In Brazil's Sao Paulo state, which has been hit hardest by the pandemic and imposed sweeping isolation measures, there was a 45% jump last month in cases of violence against women where police were dispatched, compared to a year earlier, according to thinktank the Brazilian Forum on Public Safety.

In Mexico, complaints to police of domestic violence rose around a quarter in March against a year earlier, official data show.

"Since the lockdown, there's been an increase in reports of domestic violence, many of those psychological violence," said Blanca Aquino, director of the Municipal Institute for Women of Veracruz, the Mexican state with the country's highest rate of femicides.

Arussi Unda, from Mexican feminist organization Brujas del Mar, which offers advice to women in abuse cases, said initially many calls to the group had come from neighbors hearing fights in other houses. She said there had been a rise in cases of "digital violence" and recently women looking simply to escape.

"Now we get many women asking for advice on how to leave the house and take their children without the partner later wanting to take them away by legal means," she said.

In Colombia, daily domestic violence calls to a national women's hotline were up nearly 130% during the first 18 days of the country's quarantine, according to government figures. The lockdown has been extended until May 11.

Marta Dillon, an Argentine journalist and one of the founders of the "Ni Una Menos" women's movement, said women around the world were looking to unite to tackle the issue.

"Male violence has increased under the conditions of quarantine, of social isolation... Us feminists have been saying this in Italy, in Turkey, in the United States. We are putting together a document amongst ourselves that will be a manifesto."