Electoral college, blue shift vs. red mirage, results timeline: What you need to know before US election 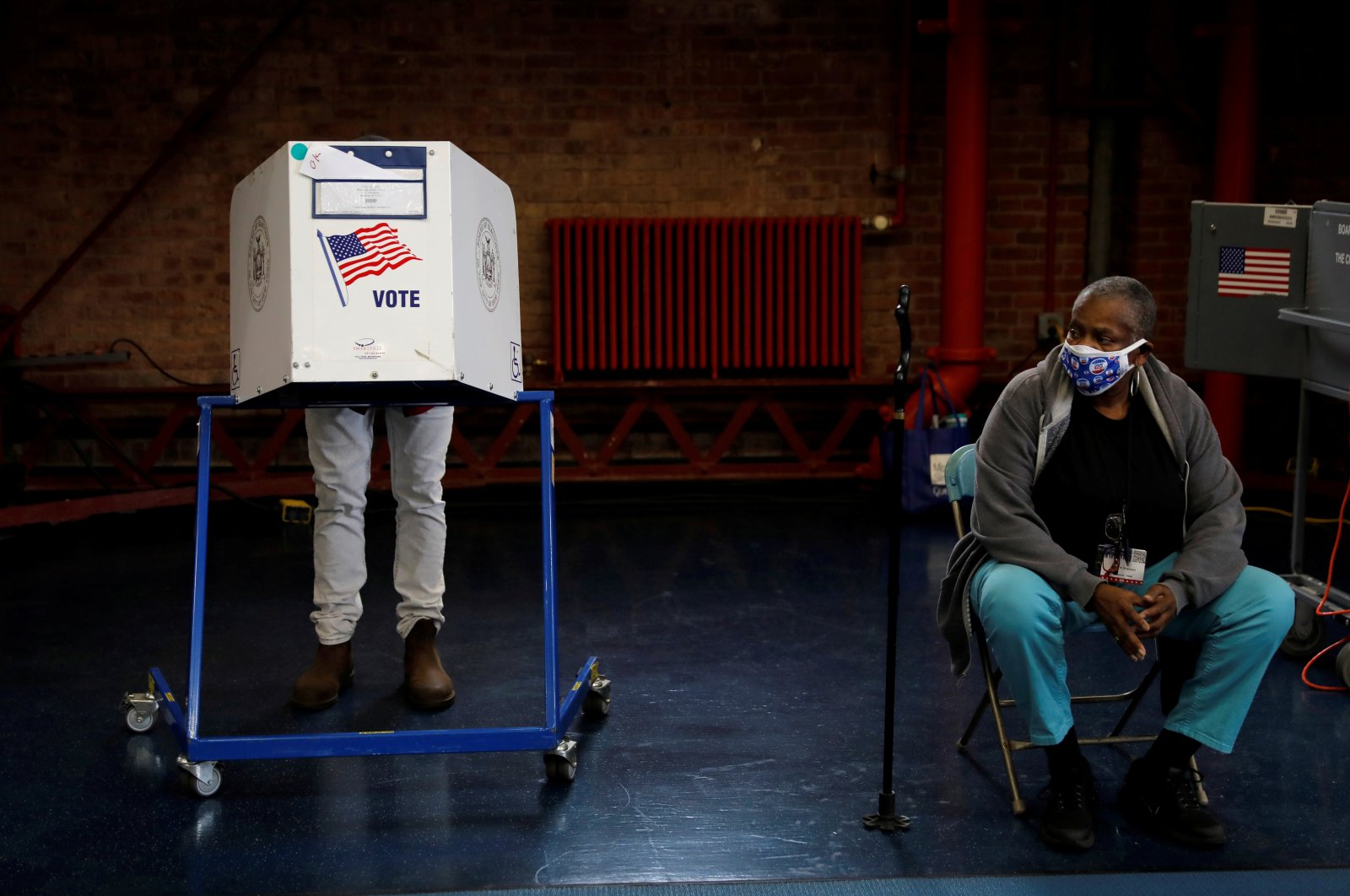 An election volunteer stands by as a voter fills out a ballot in a booth during early voting in the Brooklyn borough of New York City, Oct. 27, 2020. (Reuters Photo)
by Agencies Nov 02, 2020 11:04 am
RECOMMENDED

U.S. Election Day is finally upon us.

Or at least what we still call it Election Day, even though more than 92 million Americans have already cast ballots in a vote that has been reshaped by the worst pandemic in more than a century, its economic fallout and a long-simmering reckoning with systemic racism.

The U.S. presidential election process was already not as straightforward as most other democratic countries. This year a record surge in mail-in ballots and early voting has complicated the process even further.

Here's what you need to know ahead of the election:

The 538 members of the U.S. Electoral College gather in their state's respective capitals every four years after the presidential election to designate the winner.

A presidential candidate must obtain an absolute majority of the college vote – or 270 out of the 538 – to win.

The system originated with the U.S. Constitution in 1787, establishing the rules for indirect, single-round presidential elections.

The country's Founding Fathers saw the system as a compromise between direct presidential elections with universal suffrage and an election by members of Congress – an approach rejected as insufficiently democratic.

Since then, hundreds of amendments have been proposed to Congress in efforts to modify or abolish the Electoral College, but none has succeeded.

Each state has as many electors as it has total members in the House of Representatives (a number dependent on the state's population) and in the Senate (two in every state, regardless of size). The Constitution leaves it to states to decide how their electors' votes should be cast. In every state but two (Nebraska and Maine), the candidate winning the majority of popular votes theoretically wins all that state's electors.

Nothing in the Constitution obliges electors to vote in one way or another. If some states require them to respect the popular vote and they do not, the so-called "faithless electors" could be subjected to a simple fine. In July 2020, however, the U.S. Supreme Court ruled that states could impose punishments on such disloyal voters by establishing laws mandating electors cast their votes according to the popular outcome of that state.

Between 1796 and 2016, some 180 electors cast votes contrary to the presidential or vice-presidential candidate who won their state but it has never altered a U.S. election outcome.

The U.S. election is boiling down to a handful of battleground states that Democratic candidate Joe Biden must flip in order to snatch the White House from incumbent President Donald Trump.

All of this year's top swing states – Florida, Pennsylvania, Michigan, North Carolina, Wisconsin and Arizona – went to Trump in 2016, including four that had voted for Democrat Barack Obama in 2012.

In a sign of how critical they are, Trump traveled to three of them – Michigan, North Carolina and Florida – on Sunday alone, while Biden held two events in Pennsylvania's largest city Philadelphia.

Should the remaining 44 states vote as they did four years ago, Biden could flip just the two biggest battlegrounds, Florida and Pennsylvania, and win.

When will the race be called?

Absentee voting amid coronavirus has changed the vote-counting timeline, and there aren’t uniform practices for counting those ballots.

That makes it difficult to predict when certain key battlegrounds, much less a national result, could be called.

For example, Pennsylvania and Michigan – battlegrounds Trump won by less than 1 percentage point in 2016 –aren’t expected to have complete-but-unofficial totals for days.

Florida and North Carolina, meanwhile, began processing early ballots ahead of time, with officials there forecasting earlier unofficial returns, but each could also have razor-thin margins.

Watching results come in this year may be a bit disorienting. That's because the two parties are voting in two very different ways. Democrats have flocked to voting by mail, while Trump has encouraged Republicans to vote on Election Day.

Depending on which type of vote is being reported – the mail votes, the votes cast in person at early voting sites or the Election Day vote – the results could look skewed in one candidate's favor.

In general, early processing states – Florida, Georgia, Ohio and North Carolina – will report mail ballots first, which will skew Democratic. Then, however, those states will start tallying Election Day votes. Those should lean Republican. So initial returns may be heavily Democratic, then become more Republican as the night goes on.

The pattern could be reversed in the critical Rust Belt battlegrounds of Michigan, Pennsylvania and Wisconsin. There, the initial vote reported will be the heavily-Republican in-person Election Day ballots that could be misleading – a “red mirage.” That's because Democrats may catch up as mail ballots are tabulated in the hours and days afterward in what's been referred to as the “blue shift.”