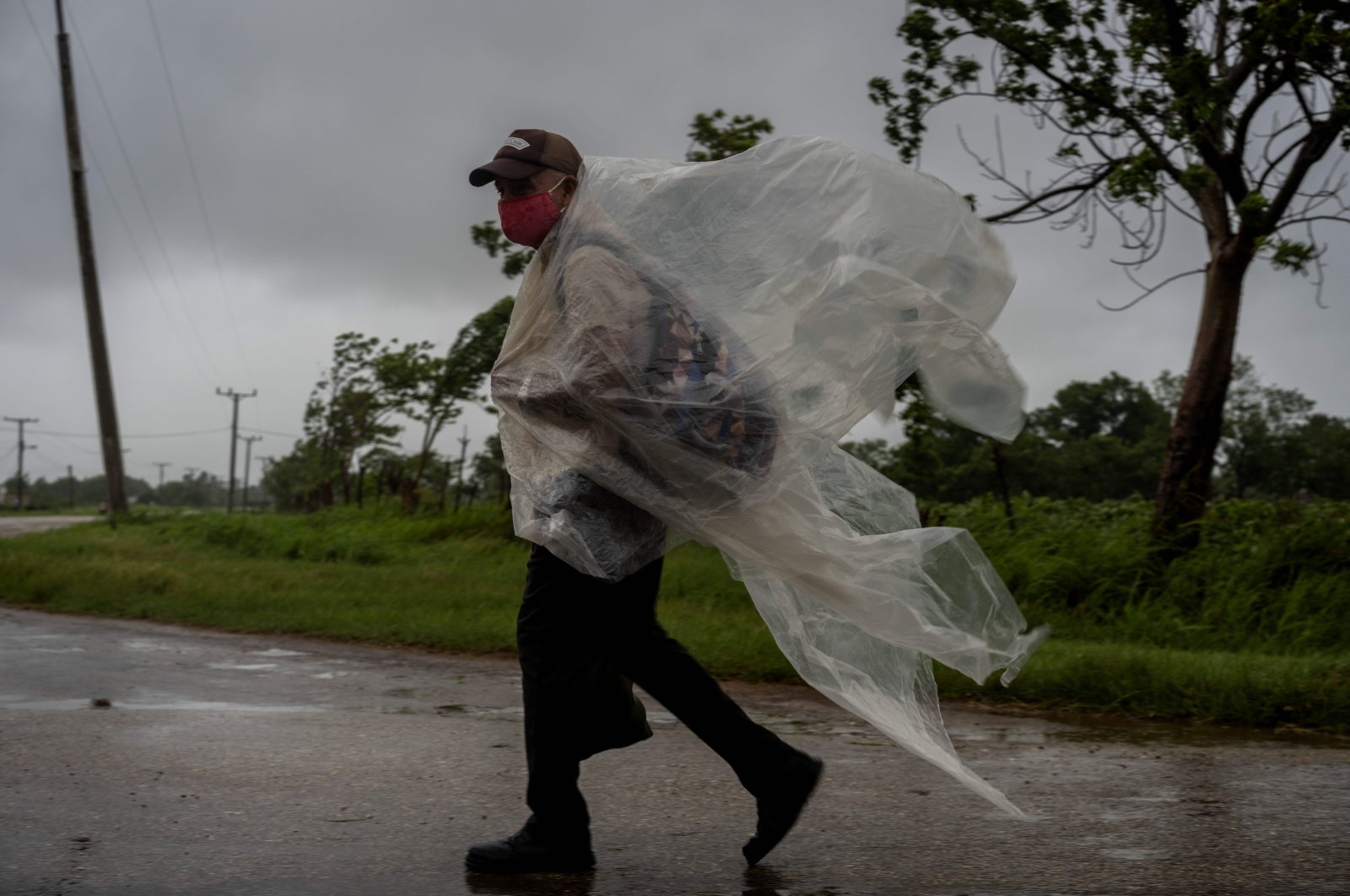 A man, wearing a makeshift poncho to protect himself from the rains of Hurricane Ida, walks on a road leading to Batabano, in the Mayabeque province, Cuba, Aug. 27, 2021. (AP Photo)
by French Press Agency - AFP Aug 28, 2021 9:58 am
RECOMMENDED

Residents evacuated high-risk areas and lined up to buy supplies Friday as Louisiana braced for Hurricane Ida, expected to strengthen to an "extremely dangerous" Category 4 storm when it hits the southern United States this weekend.

The National Weather Service is now forecasting a "life-threatening storm surge" when the hurricane makes landfall along the coasts of Louisiana and Mississippi, warning of "catastrophic wind damage" and urging those in affected areas to follow advice from local officials.

"The time to act is NOW. Hurricane Ida is now forecast to make landfall as a Category 4 hurricane," the New Orleans branch of the US National Weather Service urged in a tweet.

That level is the second-highest on the Saffir-Simpson hurricane wind scale, with a minimum wind strength of 130 miles (209 kilometers) per hour.

Louisiana has declared a state of emergency in preparation for the storm, forecast to make US landfall Sunday – 16 years to the day after the devastating Hurricane Katrina first hit the state, which flooded 80% of New Orleans and killed more than 1,800 people.

Officials have already ordered mandatory evacuations outside the levee-protected areas of New Orleans and flood-prone coastal towns on the state's coast such as Grand Isle.

"People are packing and leaving right now," Scooter Resweber, police chief in Grand Isle, told local media. "We know this is going to be a big one."

The declaration, approved by President Joe Biden, will funnel federal supplemental funds and aid to the southern state to bolster its emergency preparedness and response efforts.

The hurricane made landfall late Friday in western Cuba as a Category 1 storm, packing maximum sustained winds near 80 miles per hour.

Ida struck Cuba in the province of Pinar del Rio, the current coronavirus epicenter of the island. More than 10,000 people were evacuated and electricity was cut off ahead of the storm as a precaution.

In the capital Havana, public transport was suspended by midday and thousands of people were evacuated.

"Now is the time for Louisianans to get prepared," tweeted the state's governor John Bel Edwards, calling on residents to "make sure you and your family are ready for whatever comes."

But New Orleans mayor LaToya Cantrell told residents inside the city's protective levee system to stay in their homes.

"We do not want to have people on the road, and therefore in greater danger," she told local news website nola.com.

A public shelter was being prepared for people who could not evacuate but did not want to shelter at homes, she added.

NHC said the storm was likely to produce heavy rainfall and "considerable" flooding from southeast Louisiana to coastal Mississippi and Alabama.

Scientists have warned of a rise in the number of powerful hurricanes as the ocean surface warms due to climate change, posing an increasing threat to the world's coastal communities.