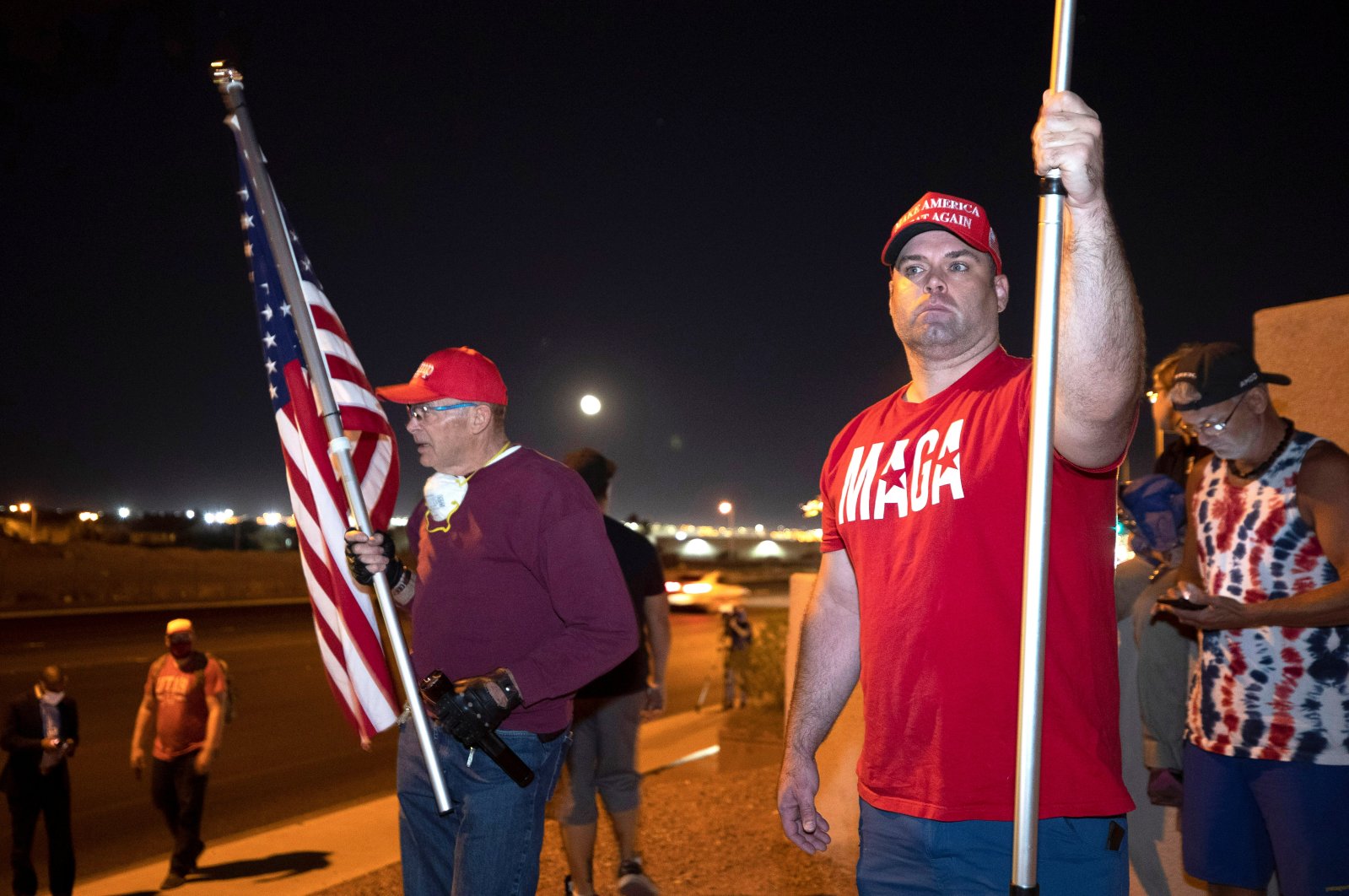 A public Facebook group pushing false claims about voter fraud and Democrats trying to "steal" the U.S. election rapidly swelled to more than 365,000 members on Thursday, a day after it was created. Facebook then removed the group on Thursday afternoon, saying it saw "worrying calls for violence."

The "Stop the Steal" group, which says it was started by the conservative nonprofit Women for America First, called for "boots on the ground to protect the integrity of the vote."

Facebook said the group was organized around the delegitimization of the election process.

With tensions rising, about 200 of Republican President Donald Trump's supporters, some armed with rifles and handguns, gathered outside an election office in Phoenix, Arizona, on Wednesday following unsubstantiated rumors that votes were not being counted.

In Detroit, officials blocked about 30 people, mostly Republicans, from entering a vote-counting facility amid unfounded claims that the vote count in Michigan was fraudulent.

It is normal in U.S. elections for states to count votes for days, or sometimes even weeks, after voting ends. Election experts say fraud is very rare in U.S. voting.

Unfounded and debunked claims about the integrity of Tuesday's election have spread on social media by Trump and high-profile Republican accounts and the hashtag #StopTheSteal has gained momentum.

Facebook groups are billed as community forums for shared interests but watchdog organizations, and social media researchers have argued that they can be hotbeds for hyper-partisan misinformation.

The Stop the Steal group's description says: "Democrats are scheming to disenfranchise and nullify Republican votes. It's up to us, the American People, to fight and to put a stop to it."

The group directed new members to an email sign-up page "in the event that social media censors this group."

The group's administrations and moderators included veteran Tea Party activist Amy Kremer and her daughter Kylie, as well as Jennifer Lawrence and Dustin Stockton, two members of the group We Build the Wall, which was raided by federal agents in August as part of a fraud investigation.

Several Facebook events billed as "Stop the Steal" protests and caravans also laid out plans for users to gather in states across the country.

Meanwhile, police arrested dozens of people in Seattle, Minneapolis and Portland, Oregon overnight during protests demanding a tally of all votes in the US election, and smaller groups backing President Donald Trump returned to tabulation sites in closely contested states to insist counting be halted.

In Seattle, seven people were arrested. One person arrested for allegedly damaging property was taken to a hospital after “experiencing a medical episode,” police said in a statement early Thursday.

The protests came as the president insisted, without evidence, that there were major problems with voting and counting of ballots. Republicans filed suit in multiple states, preparing to contest election results.

In Minneapolis, police arrested more than 600 demonstrators who marched onto an interstate in Minneapolis Wednesday night protesting Trump’s threats to challenge the election results, as well as a variety of social injustices.

No force or chemicals were used to make the arrests for walking on a freeway and being a public nuisance, the Minnesota Department of Public Safety said Thursday.

In Portland, protesters smashed windows at businesses and hurled objects including fireworks at officers. Police made at least 10 arrests, according to a statement from the Multnomah County Sheriff’s Office.

One of the people who was arrested had a rifle with a magazine of ammunition, fireworks, a knife and was wearing a ballistics vest, the sheriff’s office said.

Oregon Gov. Kate Brown called out the National Guard to manage the unrest in Portland, which has been a scene of regular protests for months.

"It’s important to trust the process, and the system that has ensured free and fair elections in this country through the decades, even in times of great crisis,” Brown said in a statement.

Portland protester Richard March said he came despite a heart condition that makes him vulnerable to COVID-19.

“To cast doubt on this election has terrible consequences for our democracy,” he said. “I think we are a very polarized society now – and I’m worried about what’s going to come in the next days and weeks and months.”

In New York, hundreds of people paraded past boarded-up luxury stores on Manhattan’s Fifth Avenue, and in Chicago, demonstrators marched through downtown and along a street across the river from Trump Tower. Protesters also gathered in cities including Los Angeles, Houston, Pittsburgh and San Diego.

In Phoenix, at least two dozen Trump supporters gathered outside city hall Thursday morning, chanting “Protect Our Vote.” The group said they planned to return to the tabulation center, where a Wednesday night rally decried a declaration by Fox News that Biden was the winner in Arizona.

Observers from both major political parties were inside the election center as ballots were processed and counted, and the procedure was live-streamed online at all times.

“Everyone should want all the votes to be counted, whether they were mailed or cast in person,” said the statement issued by two top county officials – one a Democrat and the other a Republican. “An accurate vote takes time. ... This is evidence of democracy, not fraud.”

Michigan Attorney General Dana Nessel, a Democrat, insisted Wednesday that both parties and the public had been given access to the tallying, “using a robust system of checks and balances to ensure that all ballots are counted fairly and accurately.”