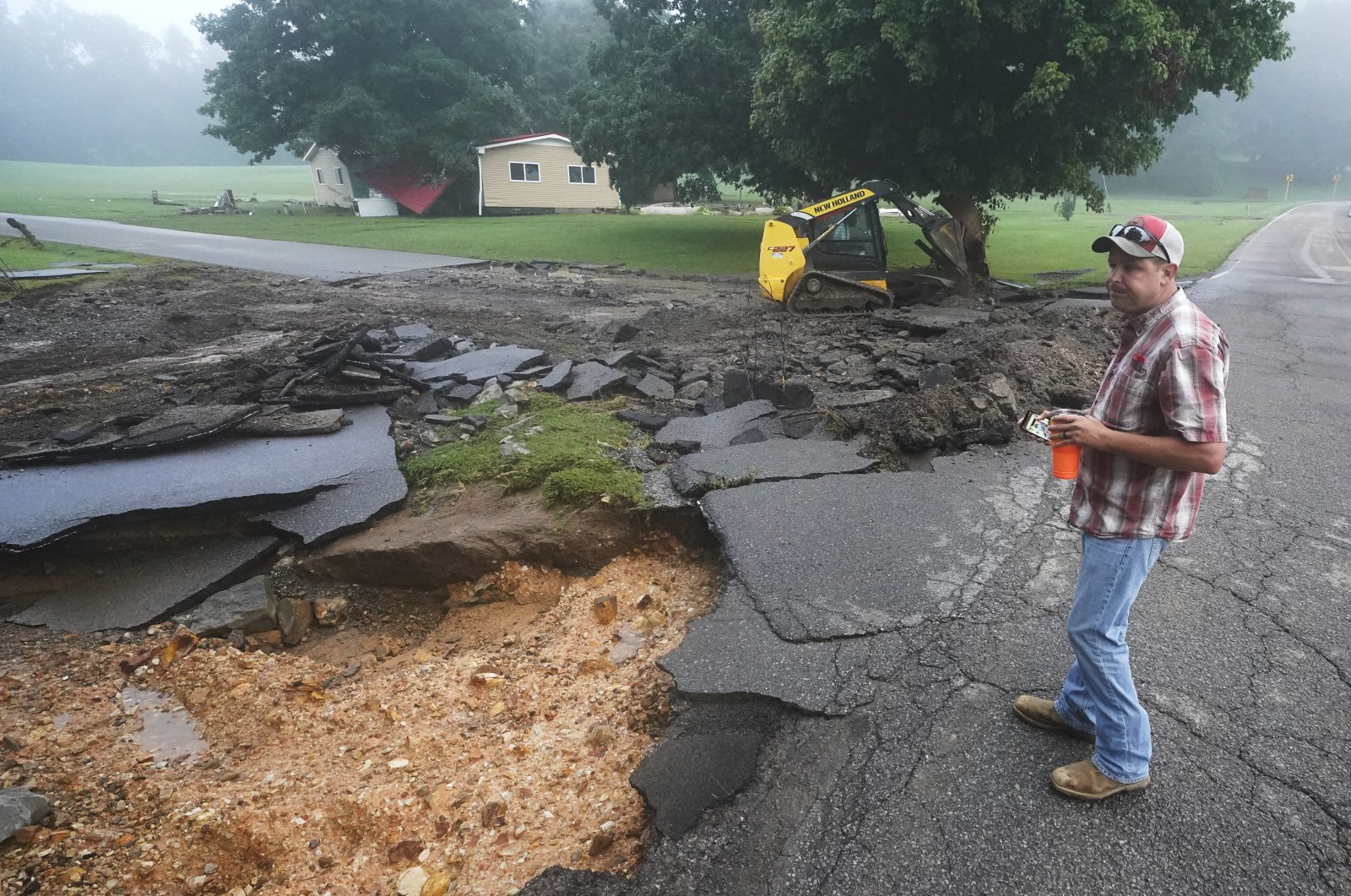 Business owner Kansas Klein watched in horror from a bridge Saturday morning as cars and entire houses were swept down a road in Waverly, a town of about 4,500 people that Klein, 48, has called home for more than half his life.

Two girls who were holding on to a puppy and clinging to a wooden board swept past, far too fast for Klein and other onlookers to go down and grab hold of them.

After being told by authorities to go back, Klein returned a couple of hours later, shocked that the floodwaters had almost entirely receded and aghast at the destruction that was left behind.

Klein said his restaurant, a decade-old New York-style pizzeria, was still standing, but the morning deluge of between 10 and 12 inches (25 to 30 centimeters) of rain in Humphreys County had caused floodwaters to reach 7 feet (2.1 meters) inside the eatery, rendering it a total loss.

After leaving his restaurant, Klein walked to the nearby public housing homes and heard yelling. A man had just recovered a baby's body from one of the homes. Other bodies would soon follow.

"I’m looking at my restaurant, thinking how horrible it was that I lost my restaurant and then I walk around the corner and see someone’s baby dead – my restaurant doesn’t mean a whole lot right now,” Klein told the Associated Press in a phone interview Saturday night. The City of Waverly Public Water System is under a boil water advisory until further notice.

The low-income homes – dozens of block buildings known as Brookside – appeared to have borne the brunt of the flash flood, Klein said.

"It was devastating: buildings were knocked down, half of them were destroyed,” Klein said. "People were pulling out bodies of people who had drowned and didn’t make it out.”

Humphreys County Sheriff Chris Davis told news outlets that more than 30 people have been reported missing. It was not immediately clear how many had lived at Brookside, located about 60 miles (96 kilometers) west of Nashville.

Four shelters were set up Saturday night for residents whose homes flooded, and a high school in McEwen was being used to reunite families. Phone lines knocked out during and after the storm complicated search efforts, the sheriff's office said in a statement.

"There were people inside homes asleep and woke up to their house moving like it was going down the creek,” said McEwen resident Michael Pate.

Two of the bodies recovered were toddlers who had been swept away from their father, Davis told WSMV-TV.

Waverly couple Cindy Dunn, 48, and her husband Jimmy, 49, were rescued from their attic by a crew who used a bulldozer to reach them."Hell. That’s what we had to go through,” Cindy Dunn told The Tennessean.

She said her husband woke her up Saturday, telling her that floodwaters had pushed her car to their backyard.

Eventually, the water in their house rose to at least 6 feet (1.8 meters) high, forcing them to the attic. Dunn said the rooftop wasn’t an option."My husband is dealing with cancer. He’s going through chemotherapy. And I am an amputee. So there was no going anywhere besides the attic,” Dunn said.

Dunn said their home and neighboring houses "are gone.”Just to the east of Waverly, the town of McEwen was pummeled with about 17 inches (43 centimeters) of rain in less than a day, prompting water rescues, road closures and communications disruptions. That rainfall total smashed the state's 24-hour record of 13.6 inches (34.5 centimeters) from 1982, according to the National Weather Service Nashville, though Saturday's numbers would have to be confirmed.

The Tennessee Emergency Management Agency activated its emergency operations center and said agencies that include the Tennessee National Guard, the state Highway Patrol and Fire Mutual Aid were responding to the flooding. In a bulletin, TEMA called the situation "dangerous and evolving” and urged people to avoid travel in the affected counties.

Klein isn't sure what the future holds for his family or his town.

He also isn’t sure what happened to the two girls and the puppy he witnessed who had been clinging on to the board. He heard that a girl and a puppy had been rescued downstream, and that the other girl was also saved, but he wasn’t sure it was them.