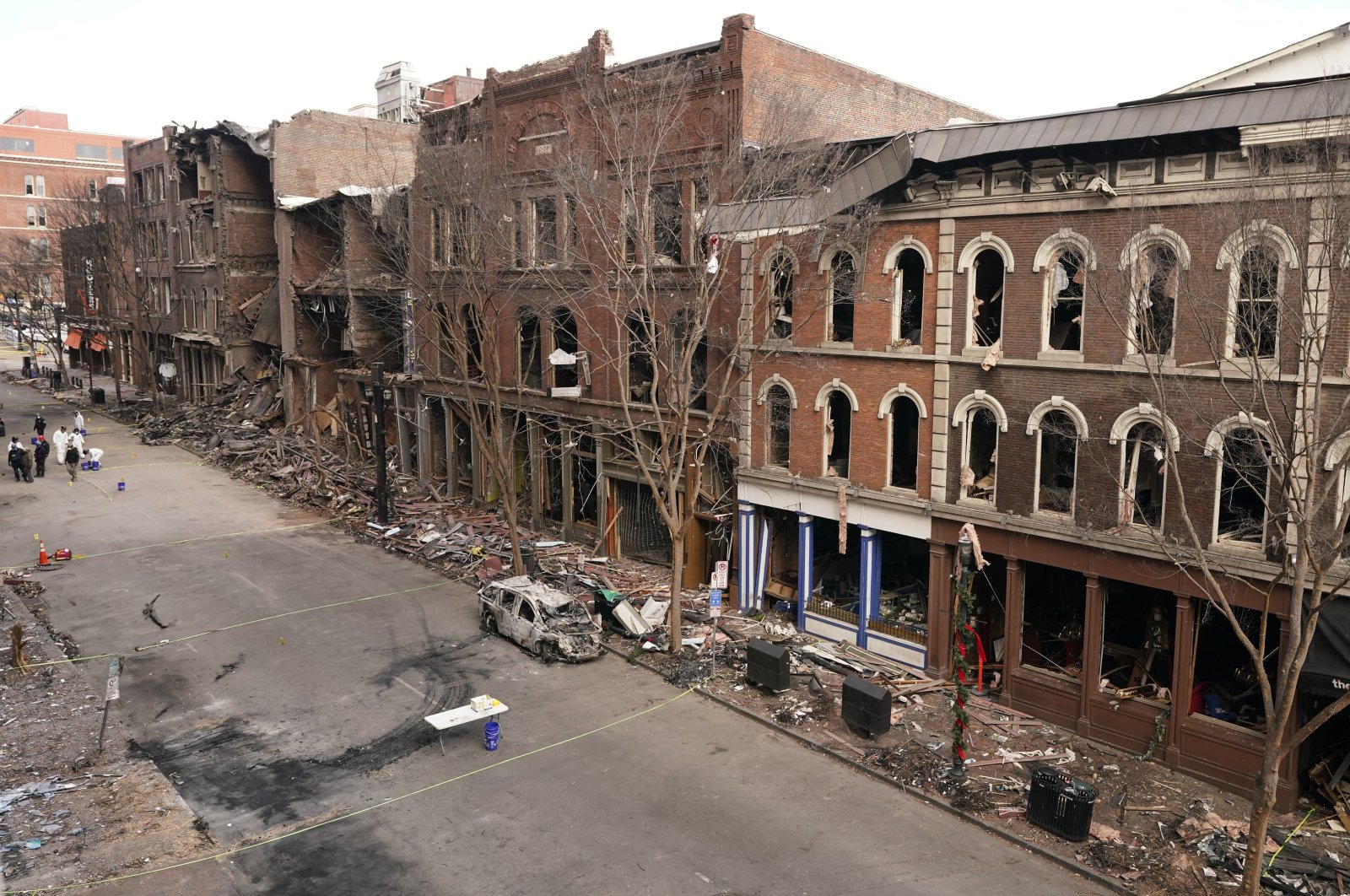 In this file photo, debris remains on the sidewalks in front of buildings damaged in a Christmas Day explosion in Nashville, Tennessee, Dec. 29, 2020. (AP Photo)
by Daily Sabah with AP Jan 06, 2021 1:25 pm
RECOMMENDED

The FBI investigation into whether the Nashville bombing was a terrorist act has sparked criticism about a possible racial double standard and drawn questions from downtown business owners whose insurance coverage could be affected by the bureau's assessment.

More than a week after an explosion that struck the heart of a major American city, the Federal Bureau of Investigation (FBI) resisted labeling it an act of terrorism, arguing that the evidence gathered so far does not conclusively establish that the bomber was motivated by political ideology. The bureau is still examining evidence and has not announced any conclusions, but investigators are known to be reviewing whether Anthony Warner believed in conspiracy theories involving aliens and 5G cellphone technology.

Earlier, 63-year-old Warner, who killed himself and injured three others in the Christmas Day explosion of a recreational vehicle, was only acknowledged by the U.S. media as a white individual with no mention of domestic terrorism or suicide bombing, prompting a major backlash on social media and drawing widespread condemnation. Despite the obvious manifestation of terrorism, leading American outlets, that present themselves as the main protector of freedom of speech and equality, have been trying to justify Warner, describing him as a lonely, elderly man, who was diagnosed with cancer and who gave away his car and his home before carrying out the bombing.

Shortly after the growing criticism that once again questioned the integrity of the U.S. press, the New York Times emphasized that the story, where the man was described as "the man who set off the Nashville explosion" is quite different from other types of bombings and domestic attacks. But the question is, how big of a platform are media groups willing to give the white suicide bomber when others, such as black people or Muslims, are not given the same consideration.

"If a bomber commits suicide with a bomb wouldn't you call that person a suicide bomber?" Daily Beast editor Molly Jong-Fast wrote on Twitter, with Midwin Charles, a legal analyst at CNN and MSNBC, saying that she "can tell from the headline that Warner is white. If he were anything else, the words 'suicide bomber' & a negative word to describe him like deranged, thug, animal, etc. would appear in the headline."

Meanwhile, the FBI agent in charge of the agency's Memphis office, Doug Korneski, told reporters last week at a news conference that when the agency assess an "event for domestic terrorism nexus, it has to be tied to an ideology. It's the use of force or violence in the furtherance of a political or social ideology or event."

"We haven't tied that yet," Korneski said according to the remarks carried by The Associated Press (AP).

Investigators have said they still did not uncover a motive, but they have learned that Warner may have believed in conspiracy theories, including the idea that shape-shifting reptiles assume human form to take over society. They added that he also discussed taking trips to hunt aliens. The FBI has confirmed that Warner sent materials about his views to people he knew, but investigators have not released details about what the packages contained.

The explosion in Music City's historic downtown damaged more than 40 businesses. Since then, a handful of state and city leaders have raised concerns about the terrorism designation, arguing that authorities would have acted differently if the 63-year-old Warner had not been a white man.

"To those bending over backward to not call this an act of terror, if Warner had been a Muslim/immigrant/black, will you say the same thing or will you be one of the millions condemning not just him but his entire community?" Nashville City Council member Zulfat Suara tweeted just days after the bombing.

The classification of the attack could help determine insurance payouts for businesses that were damaged. At issue are the varying definitions of terrorism sprinkled throughout federal law.

Small business owners tend to opt out of terrorism coverage when selecting insurance policies, presuming that a terrorist act would be unlikely to affect their company, said Jason Schupp, founder and managing member of Centers for Better Insurance, an insurance industry think tank near Washington, D.C.

Pete Gibson is the owner of Pride and Glory Tattoo Parlor, which is located directly across from the bomb site. He said terrorism coverage was the farthest detail from his mind when he was selecting an insurance policy seven years ago. He is still unsure what will be covered, but he has a meeting with attorneys this week to go over his policy.

"I hadn't even heard of terrorism coverage back then," Gibson said. "So now it's just a big mess. I'm hoping to know more soon."

Gibson said he and other small business owners were approached earlier this year during Black Lives Matter protests about considering terrorism coverage, but they all brushed it aside.

He has been able to visit the bomb site to assess some of the damage, but his tattoo shop is still too unstable to walk through. He described "massive pieces of timber all around and lights flickering."

According to the Treasury Department, 30% to 40% of Tennessee businesses have excluded terrorism coverage from their policies.

A 2002 federal law – enacted by Congress shortly after the 9/11 attacks – allows the Treasury secretary to certify an event as a terrorist act regardless of how law enforcement officials regard it. To date, the Treasury has never done so, including after the 2013 Boston marathon bombing and the 2017 Las Vegas Strip mass shooting, Schupp said.

Furthermore, domestic terrorism can be challenging to define, especially when it comes to prosecution. Though there is a definition in the U.S. criminal code, there is no federal domestic terrorism statute, meaning that Justice Department prosecutors must turn to other crimes such as explosives charges to prosecute acts that might otherwise be thought of as terrorism.

The Nashville bombing occurred well before downtown streets were bustling with Christmas activity. Police were responding to a report of shots fired when they encountered the RV blaring a recorded warning that a bomb would detonate in 15 minutes. The audio then switched to a recording of Petula Clark's 1964 hit "Downtown" shortly before the blast.