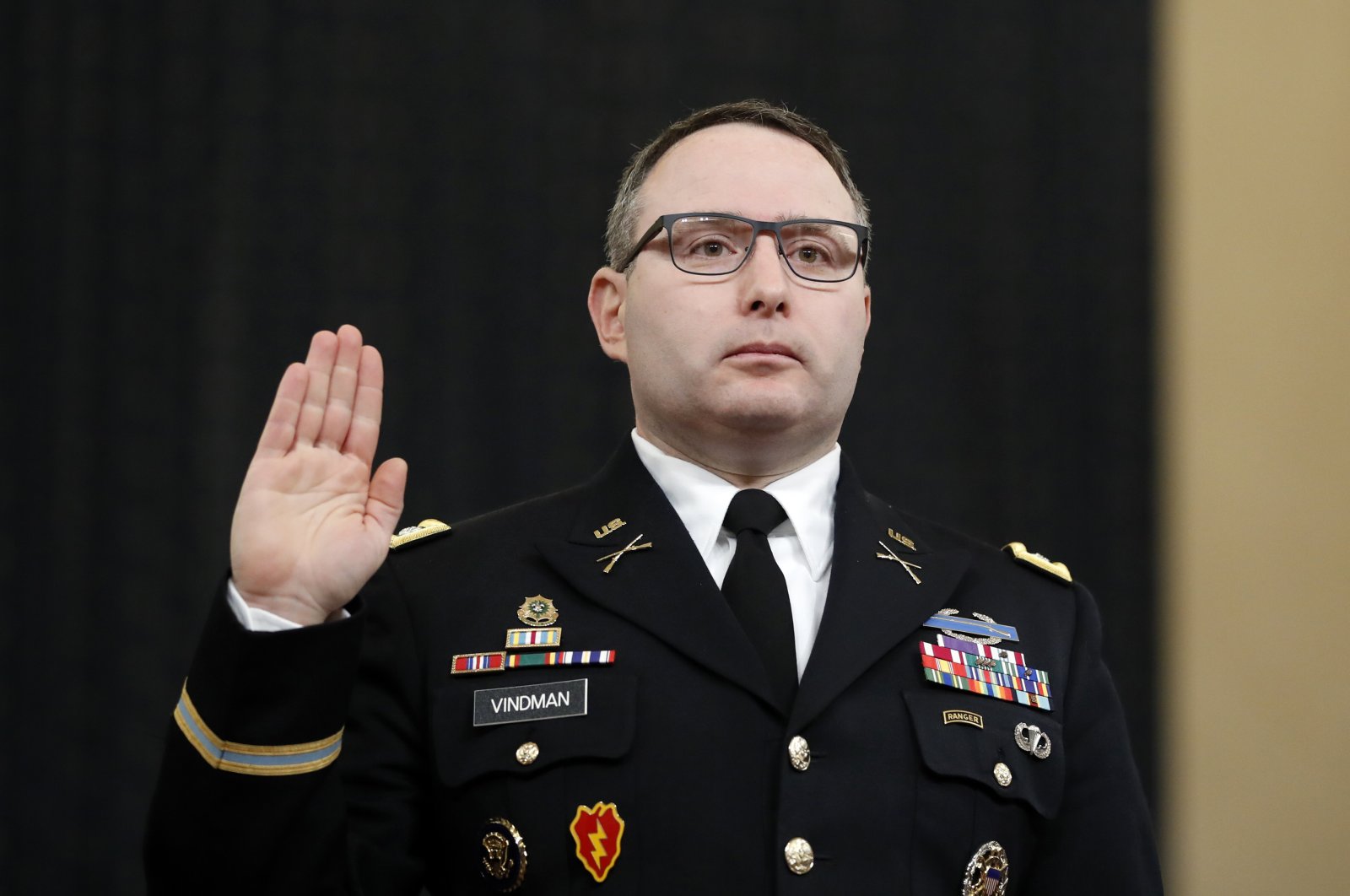 In this Nov. 19, 2019, file photo National Security Council aide Lt. Col. Alexander Vindman is sworn in to testify before the House Intelligence Committee on Capitol Hill in Washington. (AP Photo)
by ASSOCIATED PRESS Jul 09, 2020 10:33 am
RECOMMENDED

Lt. Col. Alexander Vindman, a national security aide who played a central role in U.S. President Donald Trump's impeachment case, announced his retirement from the Army on Wednesday in a scathing statement that accused the president of running a “campaign of bullying, intimidation, and retaliation.”

The statement from attorney David Pressman said Vindman, 45, was leaving the Army after more than 21 years after it had been made clear “that his future within the institution he has dutifully served will forever be limited.”

“Through a campaign of bullying, intimidation, and retaliation, the President of the United States attempted to force LTC Vindman to choose: Between adhering to the law or pleasing a President. Between honoring his oath or protecting his career. Between protecting his promotion or the promotion of his fellow soldiers," read the statement, first obtained by CNN.

Vindman’s name was on a promotion list sent to Defense Secretary Mark Esper earlier this year, according to two U.S. officials familiar with the matter. But that list was delayed for weeks because the White House asked for an investigation of Vindman, one of the officials said. The Pentagon did a review and found that any suggestion of misconduct was unfounded. One official said the list was resent to Esper about a month ago, but again was delayed.

A senior defense official said the list was held up by a routine personnel review, not related to Vindman. Esper received the final promotion list Monday and approved it, with Vindman’s name included, and it was expected to be sent to the White House in the next day or two, the defense official said.

The officials spoke on condition of anonymity to discuss an internal personnel matter.

It's not clear whether Esper already knew of Vindman's plan to retire before he signed the list, or whether the White House would have approved the promotion list. The White House and the Pentagon did not immediately respond to requests for comment.

Pressman said Vindman “did what the law compelled him to do; and for that he was bullied by the President and his proxies.”

“LTC Vindman’s patriotism,” he said, “has cost him his career. Today our country loses a devoted soldier, but it is incumbent upon all of us to ensure it does not lose the values he represents.”

Trump in February ousted Vindman from his job on the National Security Council, where he served as an expert on Ukraine, just two days after the president's acquittal by the Senate. Vindman’s lawyer said then that his client had been told to leave in retaliation for “telling the truth.”

Vindman's twin brother, Lt. Col. Yevgeny Vindman, was also asked to leave his job as a White House lawyer. Both men were reassigned to the Army.

Vindman had testified that he didn’t think it was “proper” for Trump to “demand that a foreign government investigate” former Vice President Joe Biden and his son’s work for the energy company Burisma in Ukraine. And he told impeachment investigators that he twice raised concerns over the administration’s push to have Ukraine investigate the Bidens.

In the aftermath, senior Pentagon leaders insisted that Vindman would not see any retaliation as a result of the testimony. Talking to reporters in November, Esper said the department has protections for whistleblowers.

Vindman ”shouldn’t have any fear of retaliation. That’s DOD’s position,” Esper said, adding that he flatly rejected suggestions that the soldier’s career was over. He said he had spoken with Army Secretary Ryan McCarthy about the matter.

McCarthy said in February that Vindman was not under investigation, and that he was serving in an Army headquarters job and would go on to senior service college in the summer.

In gripping testimony, Vindman also spoke of his family’s story and his father bringing them to the U.S. from the Soviet Union when he was a young child.

“Dad, my sitting here today in the U.S. Capitol, talking to our elected officials, is proof that you made the right decision 40 years ago to leave the Soviet Union and come here to United States of America in search of a better life for our family,” he testified. “Do not worry, I will be fine for telling the truth."

House Speaker Nancy Pelosi, D-Calif., said in a statement Wednesday, “History will remember Lieutenant Colonel Vindman as an American patriot.” She said his firing from the White House “was a clear and brazen act of retaliation that showcases the President’s fear of the truth, which continues to this day.”

Rep. Adam Schiff, D-Calif., the Intelligence Committee chairman who led the impeachment probe, penned a letter to Vindman saying, “I hope that you are able to reflect on these events, unprecedented as they are, and find solace in knowing that you did the right thing.”

Sen. Tammy Duckworth, D-Ill, blamed Esper for his “failure to protect a decorated combat veteran against a vindictive Commander in Chief.” Duckworth, a a former Army helicopter pilot who lost both legs during a 2004 attack in Iraq, said last week that she was blocking Senate confirmation of 1,123 senior military promotions until Esper confirmed whether or not he was approving Vindman's promotion.

“Secretary Esper’s failure to protect his troops sets a new, dark precedent that any Commander in Chief can interfere with routine merit-based military promotions to carry out personal vendettas and retaliation against military officers who follow duly-authorized subpoenas while upholding their oath of office and core principles of service,” Duckworth said in a statement Wednesday.

Vindman, who served in Iraq and later was assigned to the National Security Council as the director for European affairs, appeared at the congressional hearing wearing his uniform full of medals, including the Purple Heart he earned for wounds suffered in a roadside bomb attack.

When a soldier requests retirement, it must be approved by the Army’s Human Resources Command, and normally it can take months to process before the person actually leaves the military. It was also not clear Wednesday if Vindman's brother was on the promotion list.