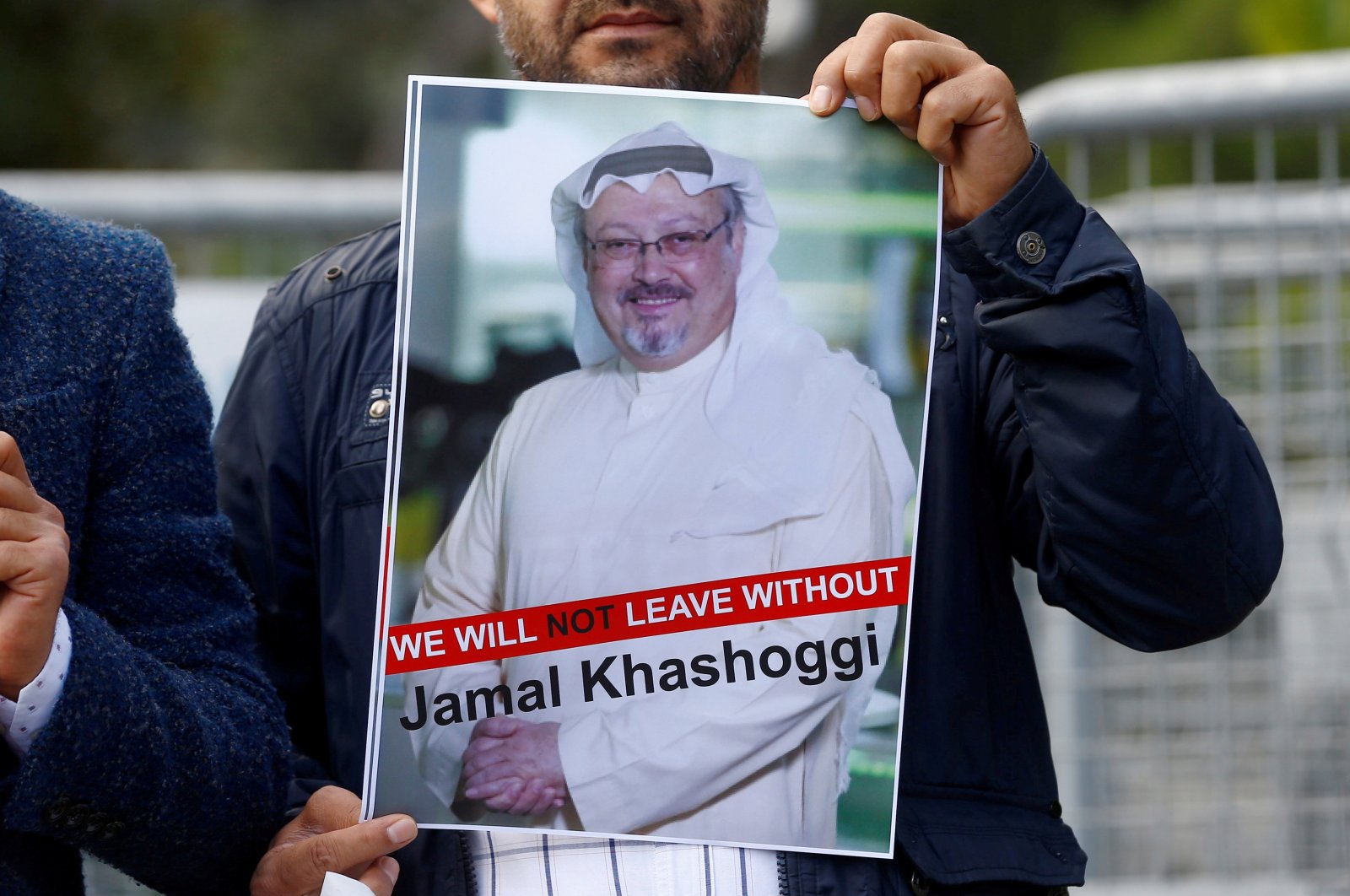 A demonstrator holds a picture of Saudi journalist Jamal Khashoggi during a protest in front of Saudi Arabia's Consulate in Istanbul, Turkey, Oct. 5, 2018. (REUTERS Photo)
by DAILY SABAH WITH AA Feb 18, 2021 2:32 pm
RECOMMENDED

The fiancee of slain Saudi journalist Jamal Khashoggi said Wednesday that she was hopeful that the new U.S. administration under the leadership of President Joe Biden will solve the murder case.

Speaking to the Norwegian public broadcaster NRK and the Danish newspaper Jyllands-Posten, Hatice Cengiz said she trusts that the new director of U.S. national intelligence, Avril Haines, will release the CIA's report on the Khashoggi murder.

While recognizing the complex relationship between the U.S. and Saudi Arabia, she said she is optimistic that Biden will stand by Washington's goal of "promoting human rights and American values."

"Those who know the truth should tell the truth. And the U.S. knows the truth. The Americans know who gave the order for the murder and who sent the killers to Istanbul," she said.

Adding that she has talked to politicians and leaders around the world to find who is responsible for her fiance's death, Cengiz said: "The arrows point to Saudi Arabia's powerful Crown Prince Mohammed bin Salman (MBS)."

When asked about the Netflix decision to not show Brian Fogel's documentary "The Dissident on Khashoggi's Murder," Cengiz said she believes there are economic and commercial reasons behind the decision.

"I still encourage everyone to watch the documentary from platforms where it can be rented and or be viewed," she said.

Khashoggi, a royal family insider turned critic, was killed and dismembered at the kingdom's consulate in Istanbul in October 2018 in a case that tarnished the reputation of the de facto ruler MBS.

A critic of the crown prince, 59-year-old Khashoggi was strangled and his body cut into pieces by a 15-man Saudi hit squad inside the consulate, according to Turkish officials. His remains have not been found.

On Sept. 28, 2018, when Khashoggi came to the Saudi Consulate for papers to marry his fiancee Cengiz, Ahmed Abdullah al-Muzaini, who worked as Saudi Arabia's intelligence station chief at the kingdom's consulate in Istanbul, informed Riyadh with an emergency code that Khashoggi had arrived at the consulate. Khashoggi's return to the consulate on Oct. 2 was also reported to Riyadh. He was slain on the same day.

Saudi officials initially denied any role in his death, and they later sought to pin blame on what they said was a botched rendition operation.

That explanation has been widely rejected by both the U.N. and U.S. lawmakers, and the CIA reportedly concluded in its still classified report that MBS directly ordered the killing.

During his time in office, former President Donald Trump had consistently sought to shield the Saudi leader from repercussions amid the widespread bipartisan outcry.

Haines committed during her confirmation hearing to providing Congress with the intelligence community's unclassified report on the murder.

Cengiz and a rights group founded by Khashoggi before his death filed the lawsuit in a Washington, D.C. District Court against MBS and over two dozen other top Saudi officials.