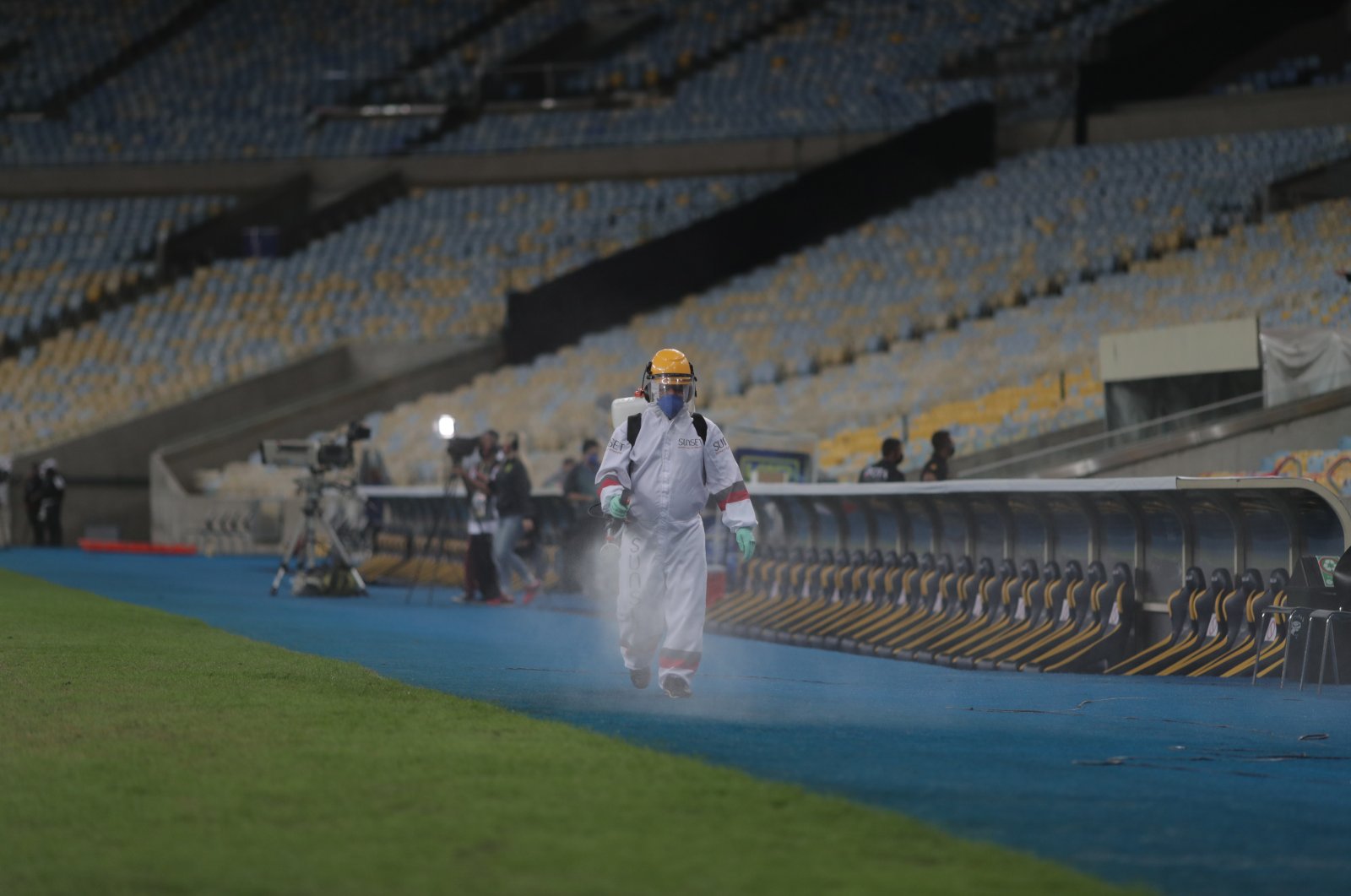 A man in a protective suit sprays disinfectant as a means of preventing the spread of the coronavirus during the Carioca Championship second leg final match between Flamengo and Fluminenes at Maracana stadium in Rio de Janeiro, Brazil, July 15, 2020. (EPA Photo)
by Anadolu Agency Jul 16, 2020 11:35 am
RECOMMENDED

Latin America surpassed 3.5 million coronavirus cases and 150,000 deaths Wednesday after an acceleration of the pandemic since the middle of last month.

The region reported an average of almost 65,000 daily cases in the past two weeks and 1 million infections in more than two weeks.

Brazil has reported almost 2 million infections, and cases in Mexico have topped 311,000 with Peru and Chile trailing. All four countries, which are among the 10 hardest-hit in the world, have begun, to varying degrees, to lift some confinement restrictions.

Bolsonaro first announced his diagnosis on July 7. He said he was taking hydroxychloroquine, a drug that has not been proven to be effective against the virus.

In April, he said even if infected, he would "not have to worry as I wouldn't feel anything, at most, it would be like a little flu or a little cold."

Earlier this week, Bolsonaro said he would resume his normal work schedule if he tested negative.

Bolsonaro told reporters Wednesday he would get tested again in a few days.

Brazil has suffered 1,233 additional deaths and registered 39,924 new cases, according to health officials. The country has recorded 75,366 deaths and 1,996,748 confirmed cases, making it the world's second worst-affected country behind only the U.S.

The recoveries in the country reached 1.25 million.

Family members of Mexico City's unionized government workers who died during the coronavirus pandemic may inherit positions of their relatives.

Mexico City Mayor Claudia Sheinbaum said it is a way to support families.

"Some had access to COVID-19 testing and others did not. There are people who, unfortunately, died and had the test done; others did not," Sheinbaum said at a news conference. "Many of the families have been asking us to be able to take their relative's place; we agreed."

There are approximately 800 positions to be filled.

In Mexico, 579 patients died of virus-related complications over the past 24 hours, taking the death toll to 36,906.

Across the world, the virus has claimed more than 584,100 lives in at least 188 countries and regions since emerging in China last December.

Over 13.55 million cases have been reported worldwide, with the U.S., Brazil, India and Russia currently standing as the hardest-hit countries, according to figures compiled by Johns Hopkins University.

The data shows more than half of all patients worldwide have recovered so far.