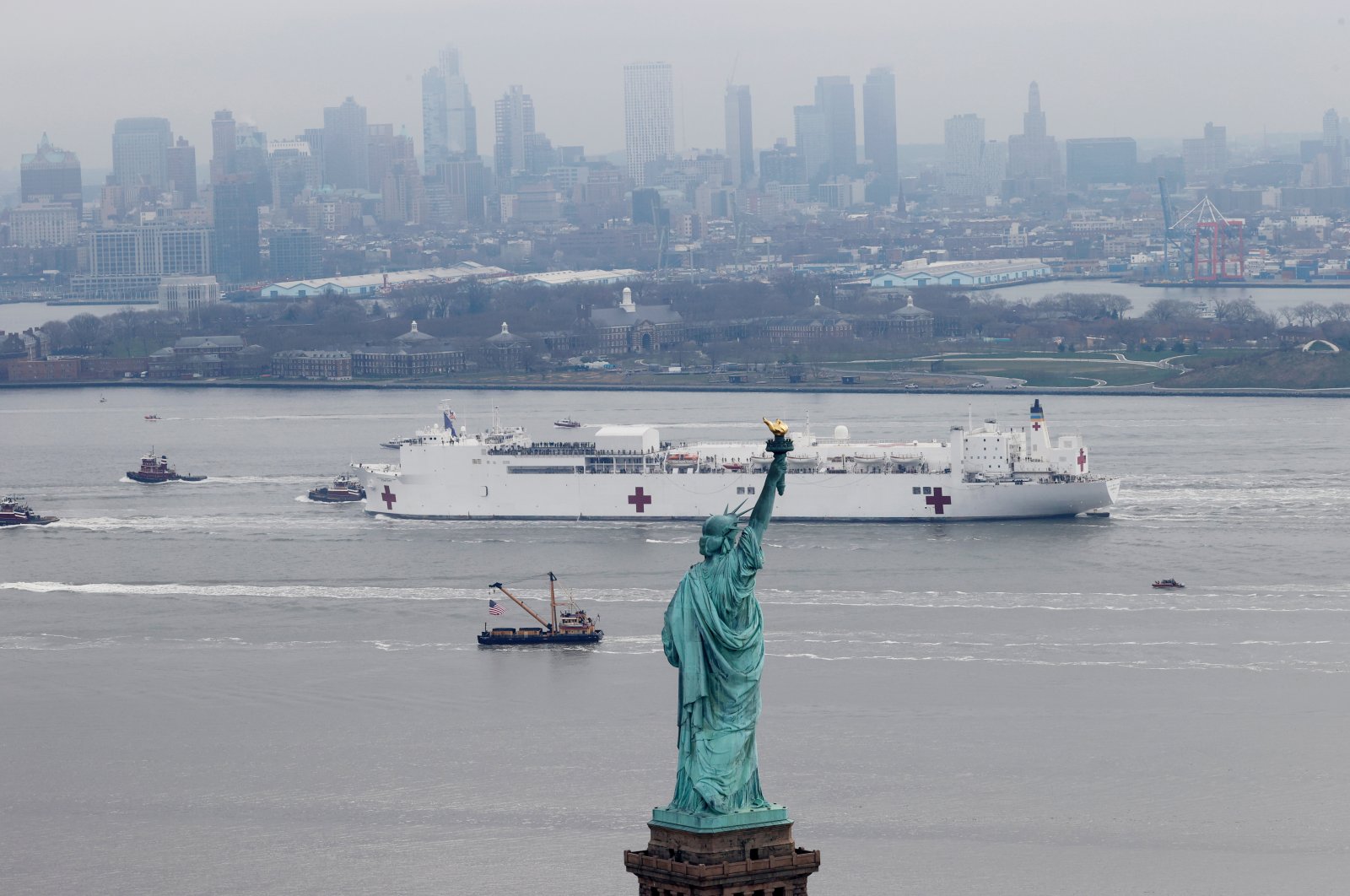 In a hopeful image that captured the spirit of a national mobilization against the coronavirus, a Navy hospital ship docked in New York on Monday as the city pleaded for more help to stanch the deadly outbreak at its U.S. epicenter.

Painted a gleaming white and adorned with giant red crosses, the 1,000-bed USNS Comfort sailed up the Hudson River, accompanied by a flotilla of support ships and helicopters hovering ahead, before docking at a Midtown Manhattan pier.

New York City Mayor Bill de Blasio and New York state Governor Andrew Cuomo, a prominent public figure in the battle to stop the coronavirus outbreak, were among the dignitaries waiting on the dock when the converted oil tanker arrived at about 11 a.m. Eastern Daylight Time (EDT).

The Comfort will treat non-coronavirus patients, including those who require surgery and critical care, the Navy said.

"It's a wartime atmosphere and we all have to pull together," de Blasio said after the ship's arrival. He said preparations for the ship, including dredging, took eight days, much less than the two weeks initially expected.

Hospitals in the city have been overrun with patients suffering from COVID-19, the respiratory illness caused by the virus. New York state accounts for almost half of the country's more than 144,000 cases and more than a third of its more than 2,500 deaths, according to a Reuters tally.

The United States has the most cases in the world.

To ease the pressure, construction of a 68-bed field hospital began on Sunday in Central Park, and the white tents being set up evoked a wartime feel in an island of green typically used by New Yorkers to exercise, picnic and enjoy the first signs of spring.

The makeshift facility, provided by Mount Sinai Health System and non-profit organization Samaritan's Purse, is expected to be ready to accept patients on Tuesday but will not take walk-ins, and admissions and transfers will be managed by Mount Sinai, de Blasio said.

De Blasio, among a growing chorus of officials who have voiced frustration at the Trump administration's handling of the crisis, said the death toll in his city would rise soon if Washington did not provide more medical supplies and assistance. "Sunday is D-Day, we need help by Sunday," he told CNN.

Authorities in New Orleans were setting up a field hospital at the Ernest N. Morial Convention Center – the same site where thousands of Hurricane Katrina refugees suffered in 2005 – to handle the expected overflow of patients.

Maryland Governor Larry Hogan issued a "stay-at-home" order as cases in the state continued to rise.

In nearby Washington, D.C., congressional officials announced that the U.S. Capitol would be closed to the public through April. They had previously said it would be closed until the end of March.

U.S. health officials are urging Americans to follow stay-at-home orders and other measures to contain the spread of the virus, which originated in China and has infected about three-quarters of a million people around the world.

"If we do things together well – almost perfectly – we could get in the range of 100,000 to 200,000 fatalities," Dr. Deborah Birx, coordinator of the White House's coronavirus task force, told NBC's "Today" show.

Dr. Anthony Fauci, a top U.S. health official, cited those figures on Sunday as a possible outcome, but Birx's assessment appeared to suggest the figures could be a floor rather than a ceiling.

"We allowed the seeds to be planted. And now there is nothing to do but wait for the bloom. A lot of these deaths are already percolating,” said Dana Miller, 61, of Belmont, Massachusetts, a retired health policy official in the U.S. government.

President Donald Trump, who initially played down the risk of the outbreak to Americans, said his administration was seeking to secure hazard pay for health care providers in direct contact with the virus.

Trump on Friday signed a $2 trillion package of emergency measures that authorizes direct payments to households, loans to small and large companies, and funding that the Federal Reserve may leverage into as much as $4 trillion more in credit.

That legislation has helped to soothe rattled nerves on Wall Street, where stocks had fallen sharply as the coronavirus outbreak worsened before rebounding last week. Major U.S. stock indexes were up again on Monday.

Trump also has extended his original 15-day nationwide stay-at-home order for another 30 days, a step that many Americans accepted with resignation.

"I’m sad to be locked inside, but I think it’s for the best,” said Mia Siracusa, 24, a data manager ordered to work out of her apartment in Brooklyn, whose live-in boyfriend is from Italy and whose mother is a New York City hospital nurse.

"I get frustrated when people don’t stay in," she said. "I am frustrated that our federal government didn’t get a handle on this sooner."