Neo-Nazi leaders in US arrested over threats to journalists, activists 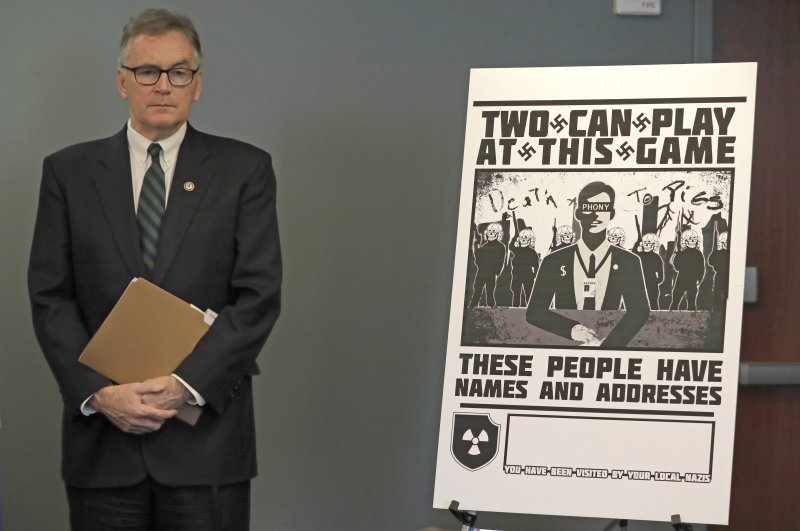 While the threat of white supremacism has become a major area of concern for the U.S., several leaders of a violent neo-Nazi group have been charged with conspiring to harass journalists, activists and a former Cabinet official, prosecutors on both coasts announced Wednesday.

“These defendants from across the country allegedly conspired on the internet to intimidate journalists and activists with whom they disagreed,” John C. Demers, assistant attorney general for national security, said in a written statement.

John C. Denton, 26, of Montgomery, Texas, was charged in U.S. District Court in Virginia with a series of hoax bomb threats that prosecutors said were aimed at drawing a heavy police response to the homes or offices of the group's targets. Another man who prosecutors say is a member of Atomwaffen, Andrew Thomasberg, faces sentencing for unrelated weapons crimes in Alexandria, Virginia, on Friday.

Four defendants were charged in Seattle as prosecutors say they were members of the neo-Nazi group Atomwaffen Division. “Atomwaffen” is a German term meaning “atomic weapons.” The members cyber stalked and sent Swastika-laden posters to journalists and an employee of the Anti-Defamation League, telling them, “You have been visited by your local Nazis,” “Your Actions have Consequences,” and, “We are Watching.” Seattle police obtained an “extreme risk protection order” against one of the defendants last fall, seizing nine guns from his home. They said he had “gone from espousing hate to now taking active steps or preparation for an impending ‘race war.’” Those steps including organizing paramilitary-style “hate camps” in Nevada and Washington, investigators said.

In August 2017, the quiet college town of Charlottesville, Virginia, became a bloodied symbol of the nation's roiling racial and political divisions following a white nationalist gathering that left one protester dead. Last month, a pro-gun rally in the U.S. state of Virginia drew dozens of far-right militia groups, requiring heavy security and prompting concerns over potential violence. The size of the crowd and the expected participation of white supremacists and fringe militia groups raised fears that the state could see a repeat of the violence that exploded in 2017 in Charlottesville.

Southern Poverty Law Center staff members attended the rally and identified members of extremist militia groups, including the Oath Keepers and the Three Percenters, as well as the League of the South. The League of the South, which the center designates as a hate group, advocates for Southern secession. The Southern Poverty Law Center has classified the Proud Boys as a hate group. Others included members of the American Guard and the Daily Stormers. The American Guard is a white nationalist group, according to the Southern Poverty Law Center, while the Three Percenters and the Oath Keepers are extremist anti-government militias. The Daily Stormers are neo-Nazis, according to the center.