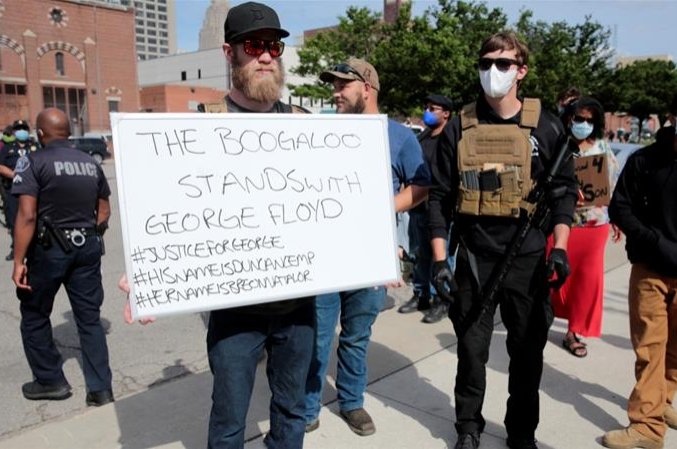 Armed men, one carrying a "The Boogaloo stands with George Floyd" sign, are seen in Detroit, Michigan, U.S. in this undated photo. (Reuters Photo)
by DAILY SABAH WITH AGENCIES Jun 05, 2020 2:15 pm

The new, far-right "Boogaloo" movement that is taking part in the police brutality protests across the U.S. is believed to have deliberately tipped demonstrations toward violence, along with other far-right groups

A new far-right movement has gained ground in the United States as growing evidence of right-wing extremists is being reported with alleged links to the violence during protests over George Floyd's death, which have spread from Minneapolis to the White House. The loosely organized “Boogaloo” movement, which uses a 1980s movie sequel as a code word for a second civil war, has reportedly taken part in the protests, as authorities believe that far-right activists, sometimes heavily armed, seek to distract from the main message of the demonstrations while aiming to cause further unrest.

Many Boogaloo participants identify with white nationalist groups or militias, researchers say, but others are gun rights advocates or just anti-government overreach and even support Black Lives Matter protests against police brutality. Images from the weekend protests spotted some “boogaloo bois” in the crowds, carrying high-powered rifles and wearing tactical gear.

Another far-right group, the Three Percenters militia movement, also appeared to be taking part in the protests. The militia group is known for its violent rhetoric. Members of the far-right group took part in the deadly neo-Nazi Unite the Right rally in Charlottesville, Virginia. The group was also linked to an attempted bomb attack on the BancFirst building in Oklahoma City in 2017.

At least two out of the three men charged on June 4 with plotting violence at a Las Vegas anti-racism protest participated in Boogaloo groups on Facebook, according to an FBI criminal complaint. One of those charged Wednesday, Stephen Parshall, had publicly "liked" several Boogaloo-themed groups, his personal page showed until Facebook closed it after the case was filed. He had also posted a picture of a Confederate battle flag.

Facebook Inc. is making it harder to find user groups associated with the term "Boogaloo," the company said Thursday. Facebook will no longer recommend such groups to members of similar associations, a spokeswoman for the world's largest social media network said.

A series of reports this year by researchers and media have drawn attention to the loose movement and its propagation on social media. In April, an advocacy group called the Tech Transparency Project warned that Boogaloo followers were discussing taking up arms while promoting protests to "liberate" states from coronavirus restrictions.

On May 1, Facebook banned the use of Boogaloo and related terms when they accompany pictures of weapons and calls to action, such as preparing for conflict. The specific terms Facebook was acting against are evolving, it said Thursday. To evade the scrutiny, many have switched to terms such as "Big Igloo" or "Big Luau" while maintaining the same discussions about weaponry, future wars and conspiracy theories. Facebook said the politics of Boogaloo members it looked into "ran the gamut" from right to left.

The Trump administration has largely remained silent on local reports that far-right protesters were also involved. Meanwhile, Democratic mayors said Trump’s handling of the crisis was reminiscent of one of the darkest moments of his presidency – when he said there were “good people on both sides” of protests in 2017 over white supremacists demonstrating in Charlottesville, Virginia.

Floyd's death has reignited long-felt anger over police killings of African Americans and unleashed a nationwide wave of civil unrest unlike any seen in the U.S. since Martin Luther King Jr.'s 1968 assassination. The demonstrations have been largely peaceful but many have broken down into violence and looting after nightfall.