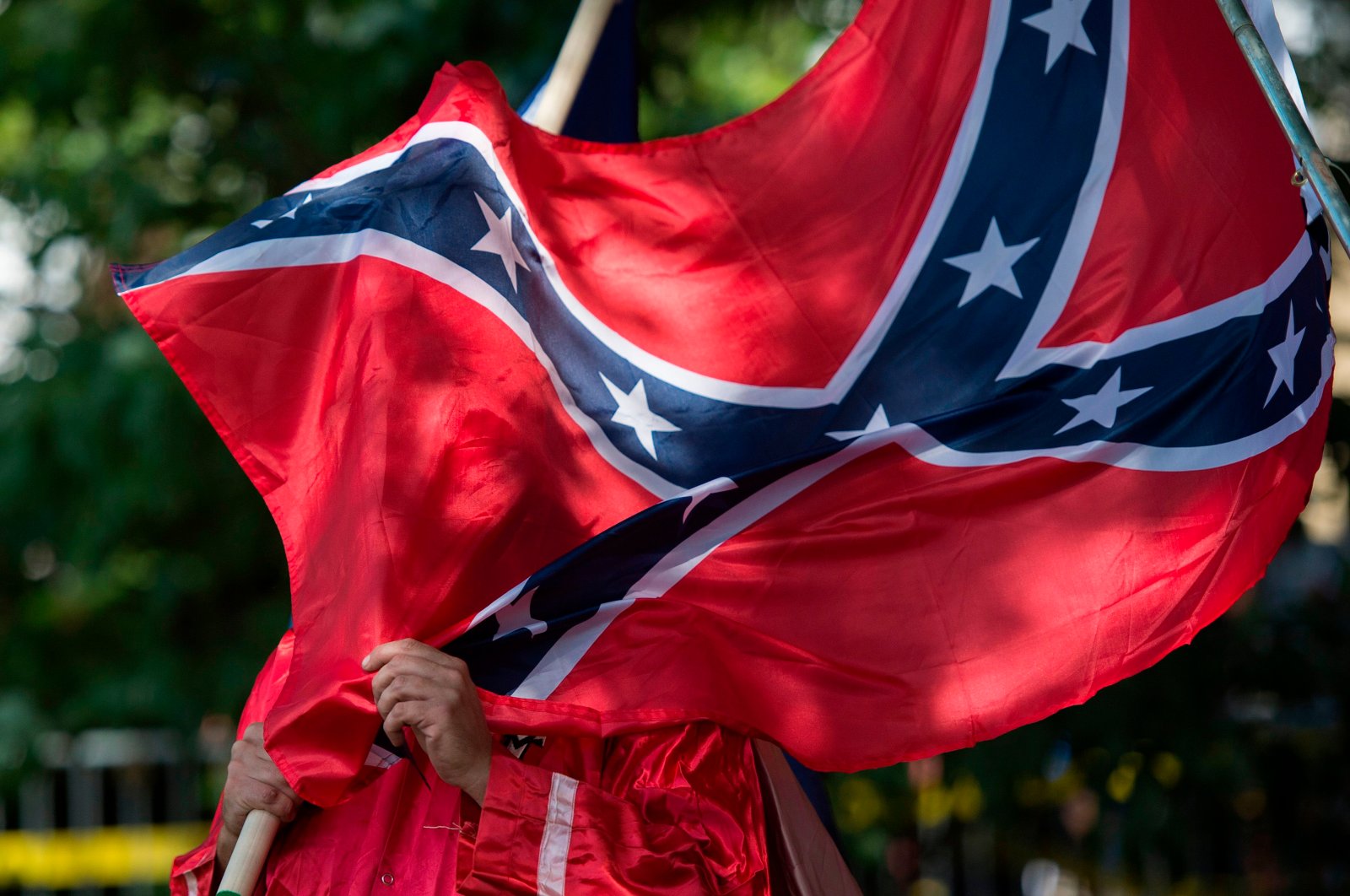 A member of the Ku Klux Klan holds a Confederate flag over his face during a rally, calling for the protection of Southern Confederate monuments, in Charlottesville, Virginia on July 8, 2017. (AFP Photo)
by French Press Agency - AFP Jul 17, 2020 10:22 pm
RECOMMENDED

Pentagon chief Mark Esper on Friday effectively banned the display of the Confederate flag at all U.S. military facilities, where the banner – seen by many as racist is frequently displayed in barracks and common areas.

In a message to all U.S. military officials, the Defense Department posted a list of flags authorized to be flown at bases and aboard war ships, in offices and conference halls, and in any spaces operated by the military.

Left off that list was the Confederate battle flag, a red banner with two diagonal blue stripes and 13 white stars symbolizing the southern slave-holding states that seceded from the union or supported the effort during the 1861-1865 American Civil War.

"The flags we fly must accord with the military imperatives of good order and discipline, treating all our people with dignity and respect, and rejecting divisive symbols," Esper wrote in a two-page memorandum.

The carefully worded statement did not specifically mention the Confederate flag, or the racial tensions that have simmered since the killing of unarmed African American George Floyd in police custody in late May.

It appeared crafted in a way to avoid open conflict with U.S. President Donald Trump, who has repeatedly waded into the debate over the Confederate flag to argue that people who fly it are exercising their freedom of speech.

Since the death of Floyd, the U.S. military one of the most racially diverse American institutions has conducted a sweeping internal debate on racism.

For years, some soldiers have been fond of displaying Confederate flags in their barracks, claiming the freedom of expression enshrined in the U.S. Constitution.

White southerners often fly the flag as a symbol of their southern heritage and pride, but for most African Americans, it is a potent symbol of slavery, racism and white supremacy.

By effectively banning the flag, Esper is differentiating himself from Trump, who addressed the Confederate issue in a CBS interview this week.

"I know people that like the Confederate flag and they're not thinking about slavery," Trump told the network. "With me, it's freedom of speech, very simple."

Esper and General Mark Milley, chairman of the Joint Chiefs of Staff, have also spoken out in favor of renaming U.S. military bases currently named for Confederate generals, an idea the president opposes.