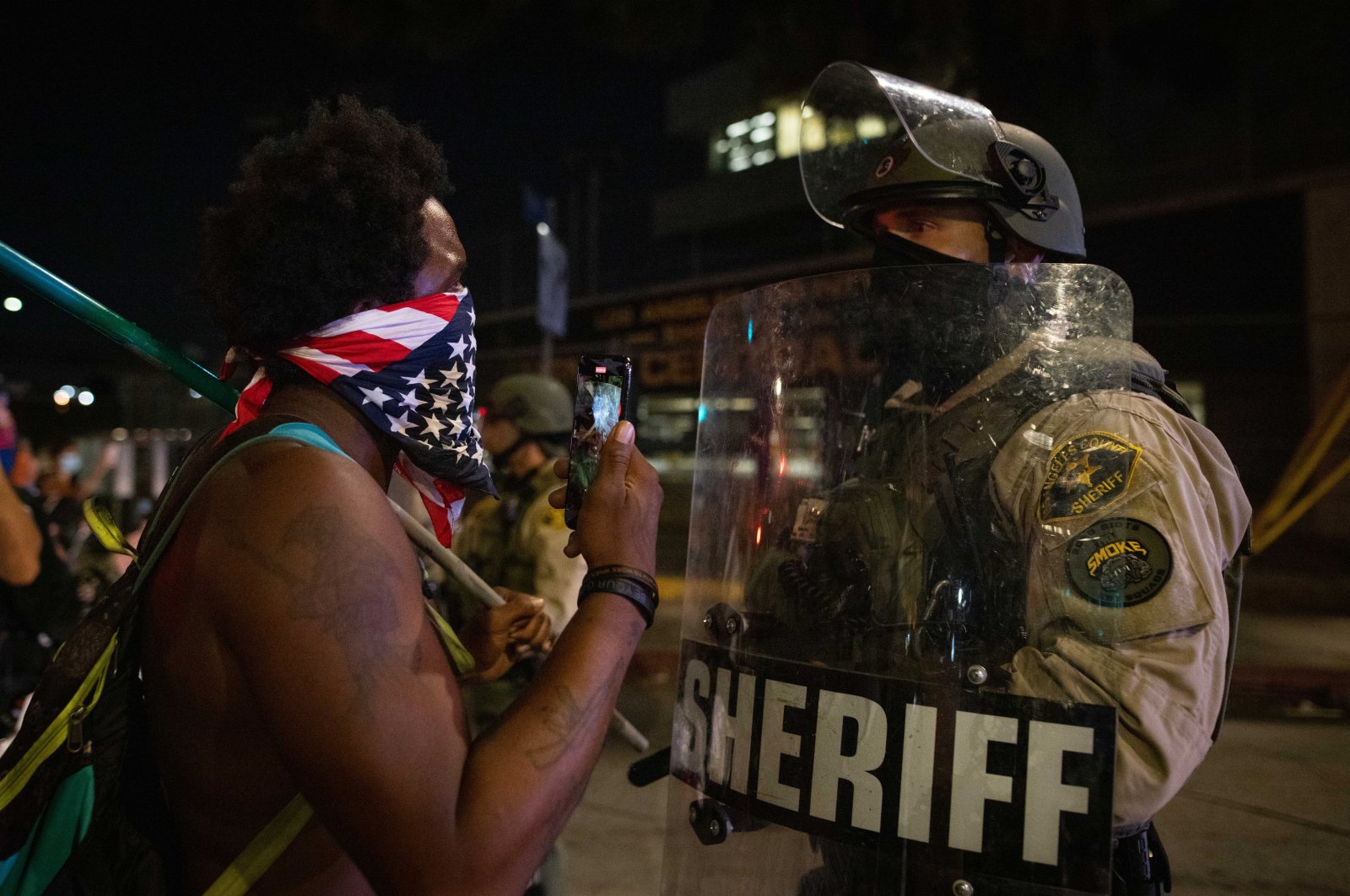 A truck drove through a group of protesters in Hollywood on Thursday night, striking and running over at least one person as it sped through the crowd, news footage shows.

Demonstrators had gathered at 7 p.m. at Hollywood Forever Cemetery before marching through the streets of Hollywood to decry the announcement Wednesday that just one police officer in Louisville, Kentucky, would face charges in the case of Breonna Taylor, and not for her death.

The group was moving along Sunset Boulevard, videos posted to Twitter and YouTube show, when what appeared to be a black pickup accelerated among the protesters, striking one directly and hurtling the person backward. The truck then sped down Sunset Boulevard, nearly hitting other people who leaped out of the way, the footage shows.

Nicholas Prange, a spokesperson for the Los Angeles Fire Department, said paramedics were called just before 9 p.m. to the corner of Sunset Boulevard and Seward Street. An ambulance transported at least one person to a hospital. Prange had no information about their condition.

In Louisville, over 1,000 people protested Thursday evening in the city center, defying a second night of curfew.

With a 9 p.m. to 6:30 a.m. curfew in place through the weekend, about 100 protesters in violation of the rule Thursday sought refuge at the First Unitarian Church late Thursday.

Heavily armed police surrounded the building, and helicopters whirled overhead, but the demonstrators were allowed to leave around 11 p.m.

Authorities arrested at least 24 people on charges including unlawful assembly, failure to disperse and riot in the first degree, police said, though the city appeared to avoid the violence of the previous evening.

Taylor's death has become a rallying cry for the Black Lives Matter (BLM) movement and the grand jury decision sent fresh demands for racial justice billowing across the country.

Two police officers were shot and wounded Wednesday as thousands flooded the streets of Louisville to protest the grand jury's decision. Both are expected to recover.

Louisville police chief Robert Schroeder said a suspect, Larynzo Johnson, had been arrested and charged with two counts of assault and 14 counts of "wanton endangerment."

Schroeder said there had been a total of 127 arrests overnight Wednesday across the city, Kentucky's largest with a population of 600,000, and at least 16 instances of looting.

Taylor, an emergency room technician, was shot dead on March 13 after three plainclothes policemen executing a search warrant in the middle of the night burst into the apartment.

Taylor's boyfriend exchanged fire with the officers, who he said he thought were intruders.

But neither Hankison nor the two officers who fired the shots that killed Taylor were charged in direct connection with her death.

President Donald Trump, who is campaigning for reelection on a "law and order" platform and has repeatedly stoked fears about violence, tweeted that he was "praying" for the officers who were shot.

Seething protests have rocked America's cities for months, with the movement's anger fed by a stream of deaths of black people at the hands of police, and exacerbated by badly fractured national politics and inflammatory rhetoric by Trump.

Kentucky Attorney General Daniel Cameron said the two officers who had fired the shots that killed Taylor had done so in self-defense, and would therefore not be charged.

The city of Louisville settled a wrongful death suit with Taylor's family for $12 million last week.