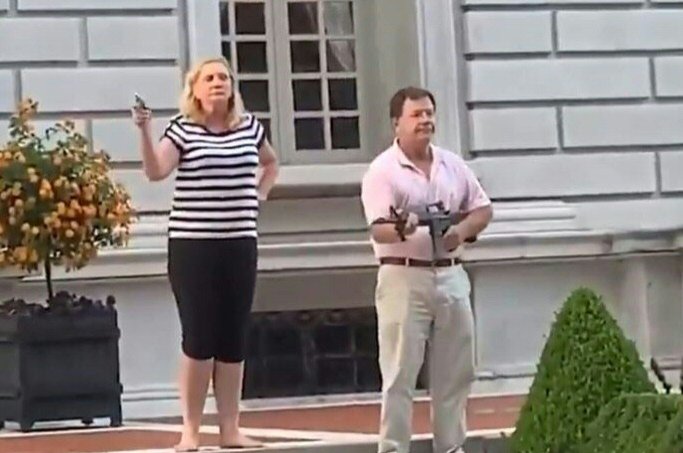 This screen grab taken from a video shows Mark McCloskey, 63, and his 61-year-old wife, Patricia, standing outside their home and holding guns including a semi-automatic rifle at Black Lives Matter protesters marching to the home of the city's mayor on June 28, 2020 in St. Louis, Missouri. (AFP Photo/Daniel Shular via Eurovision")
by Compiled from Wire Services Jul 11, 2020 6:44 pm
RECOMMENDED

Police have executed a search warrant at the home of a St. Louis couple who gained notoriety for pointing guns at Black Lives Matter protesters marching past their property last month.

The raid on Mark and Patricia McCloskey’s mansion resulted in authorities seizing the rifle that Mr. McCloskey was seen brandishing in a video that went viral after the incident in June.

The search took place on Friday night at the property in the Central West End neighborhood, according to local news station KSDK.

On 28 June, protesters marched by the McCloskeys home on a private street on their way to St Louis mayor Lyda Krewson’s house in a nearby gated community.

Demonstrators were calling for the mayor's resignation after she read out the names and addresses of those who had written her demanding she defunds the police force during a live-streamed briefing.

The couple claimed that the group yelled obscenities and threats of harm and that they “observed multiple subjects who were armed” and so armed themselves.

In Missouri, there are a number of laws that may protect the McCloskeys from any criminal charges. No charges have been filed to date.

However, St Louis University law professor John Ammann told KMOV that under those protections you are not allowed to aim a gun unless there is a specific threat that someone is approaching or attempting to enter the home. Video footage showed that Mrs. McCloskey appeared to be pointing a gun indiscriminately, with her finger on the trigger, rather than at a specific threat.

City prosecutor Kim Gardner is investigating the incident. She said at the time: “Make no mistake: We will not tolerate the use of force against those exercising their First Amendment rights and will use the full power of Missouri law to hold people accountable.”

There was no immediate indication the McCloskeys had been arrested or charged with a crime. The warrant applied only to a search for the guns, KSDK reported.