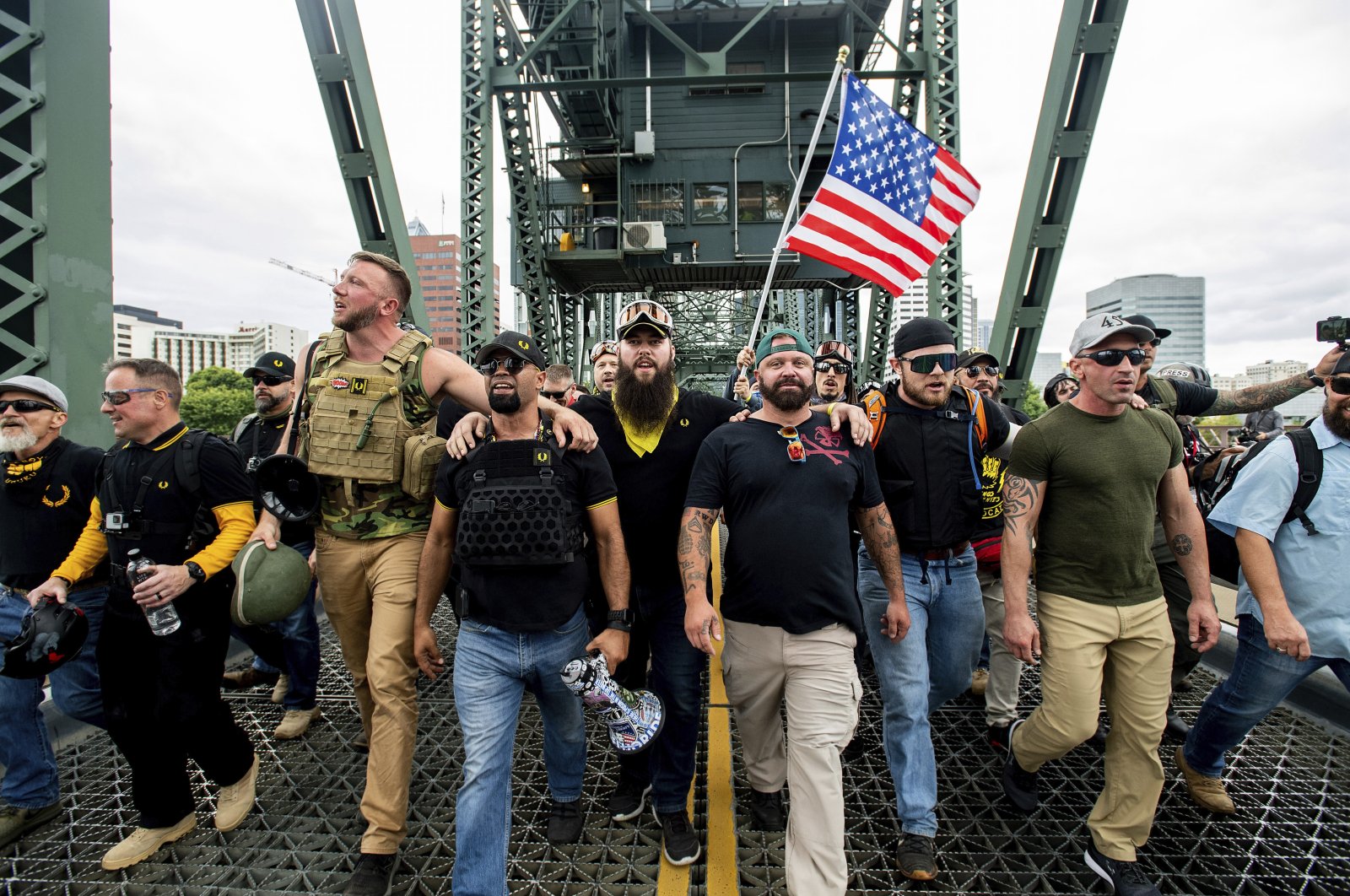 In this Aug. 17, 2019, file photo, members of the Proud Boys and other right-wing demonstrators march across the Hawthorne Bridge during a rally in Portland. At least several thousand people are expected in Portland on Sept. 26, 2020, for a rally in support of President Donald Trump and his re-election campaign as tensions boil over nationwide following the decision not to charge officers for killing Breonna Taylor. (AP Photo)
by Daily Sabah with Reuters Sep 26, 2020 2:25 pm
RECOMMENDED

Thousands of supporters of the far-right Proud Boys group are expected in Portland, Oregon Saturday as police prepared for clashes in a city that has become the epicenter of sometimes deadly political violence in the run-up to the Nov. 3 election.

Gov. Kate Brown Friday declared a weekend state of emergency for the state's biggest city, saying "white supremacist groups" were traveling from out of state to attend an event the Proud Boys say has been organized to "end domestic terrorism."

The self-declared "Western chauvinist" Proud Boys have publicized the protest on Facebook for weeks, despite the social network's pledge to block such pages, according to images provided by the Tech Transparency Project seen by Reuters. Facebook said Friday that it had removed the pages.

Portland has become a magnet for right-wing counter-protesters following four months of anti-fascist and Black Lives Matter demonstrations against police violence and racism.

Left-right clashes have escalated across the United States since mid-August. On Aug. 29, a self-declared anti-fascist shot dead a right-wing Patriot Prayer member in Portland on after a teenage vigilante killed two protesters and wounded another in Kenosha, Wisconsin on Aug. 25.

Facebook and other online platforms such as Parler have buzzed with calls for protesters to arm themselves and wild talk of civil war.

President Donald Trump, who has made law and order a principal theme of his re-election bid, singled out Portland as one of several Democratic-led cities he calls "anarchist jurisdictions" that should have federal funding cut. Democratic challenger, former Vice President Joe Biden, said Trump's rhetoric was stoking violence.

Under Brown's emergency declaration, a state and local law enforcement task force has been authorized to use "proportional force," including tear gas and other munitions, to keep the peace.

The Proud Boys will gather at noon at Delta Park, about 10 kilometers (6 miles) north of downtown. Left-wing groups will hold a counter-protest about 3 kilometers away.

The men-only Proud Boys group describes itself as a fraternal organization that is "anti-racism" and "anti-political correctness."