Priest forcibly removed out of church for Trump's Bible show 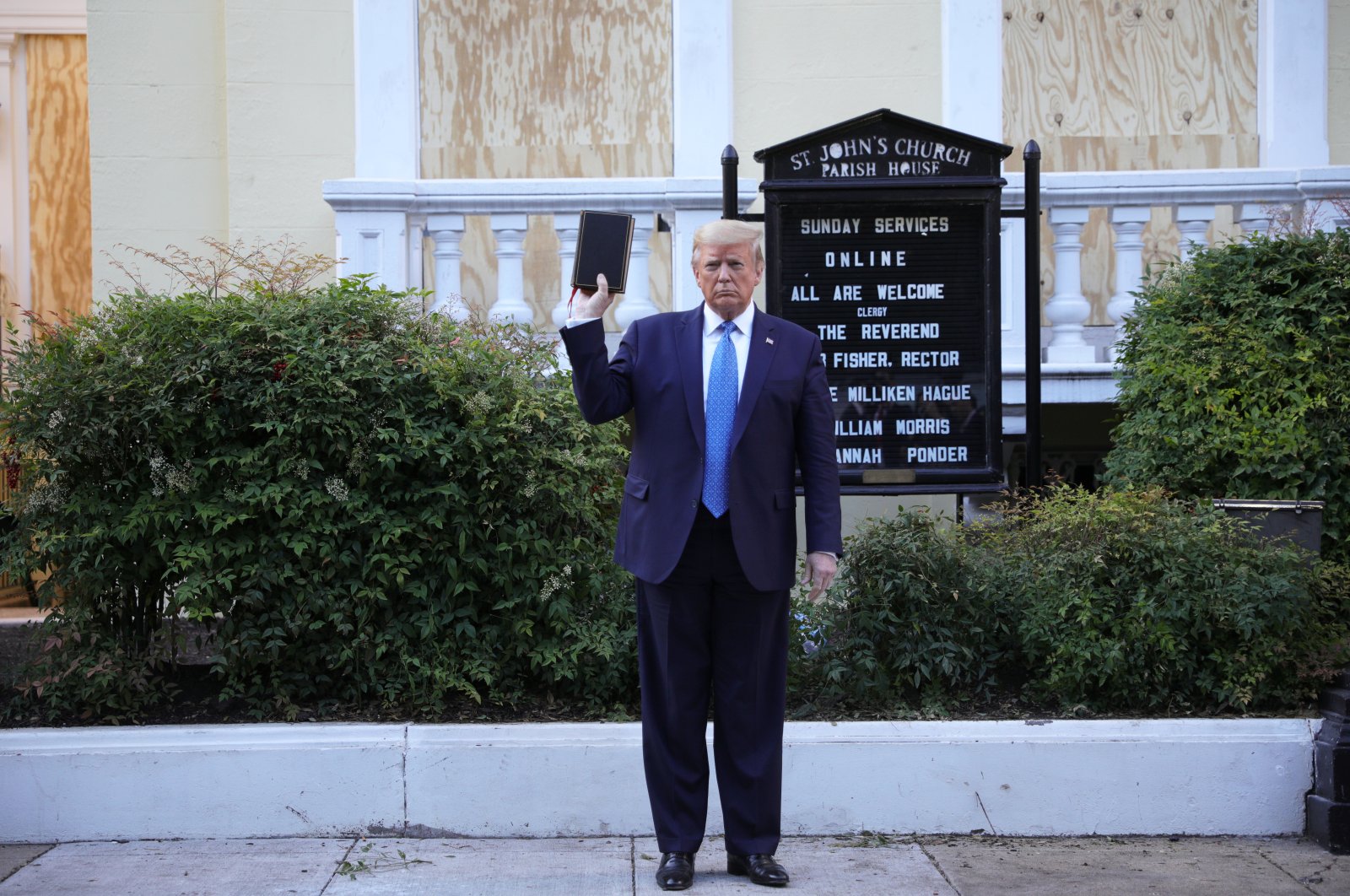 U.S. President Donald Trump holds up a Bible as he stands in front of St. John's Episcopal Church across from the White House after walking there for a photo opportunity during ongoing protests over racial inequality in the wake of the death of George Floyd while in Minneapolis police custody, at the White House in Washington, U.S., June 1, 2020. (Reuters Photo)
by Anadolu Agency Jun 02, 2020 11:27 pm
RECOMMENDED

U.S. authorities expelled a priest and a seminarian from an iconic Washington D.C. church shortly before President Donald Trump unexpectedly showed up to pose with a Bible, according to the Religion News Service.

Trump went to the St. John's Episcopal Church on Monday, which was damaged the previous day during protests involving the murder of an unarmed black named George Floyd while in police custody last week in Minneapolis, Minnesota.

Reverend Gini Gerbasi, an Episcopal priest in the city told Religion News that police used tear gas to expel her and others from church property less than an hour before Trump's show.

"They turned holy ground into a battleground," Gerbasi told the news service. "That's what it was for: to clear that patio so that man could stand in front of that building with a Bible."

Gerbasi was not alone in slamming Trump's action.

The Right Reverend Mariann Budde, the Episcopal bishop the church that oversees St. John's, criticized Trump for using the church "as a backdrop for a message antithetical to the teachings of Jesus and everything our churches stand for."

The most surprising bashing of Trump's church maneuver came Tuesday from one of the president's Republican allies, Nebraska Senator Ben Sasse.

"There is no right to riot," Sasse said in a statement. "But there is a fundamental – a Constitutional – right to protest, and I'm against clearing out a peaceful protest for a photo op that treats the Word of God as a political prop."

Known as the church of the presidents for its proximity to the White House and frequent visits from sitting presidents, St. John's, like many Episcopal congregations, boasts a liberal bent and has had a critical approach to Trump since the beginning of his term.

Prior to his church appearance, Trump gave a fiery speech vowing to establish law and order at all costs.

There are reports the president wanted the nation to see him in the open after news outlets reported he was hiding in the White House bunker Friday night as protests neared the Executive mansion.

Floyd, 46, died on May 25 after now-former police officer Derek Chauvin knelt on his neck for nearly nine minutes during an arrest for allegedly using a counterfeit $20 bill at a local store.

His last words: "I can't breathe," became a slogan of nationwide demonstrations.

Chauvin and three other officers involved in Floyd's arrest were fired when a video of his death went viral but as of the publication, Chauvin has been arrested and charged with third-degree murder and manslaughter.

Demonstrators are demanding the three other officers are also arrested and charged with similar crimes.