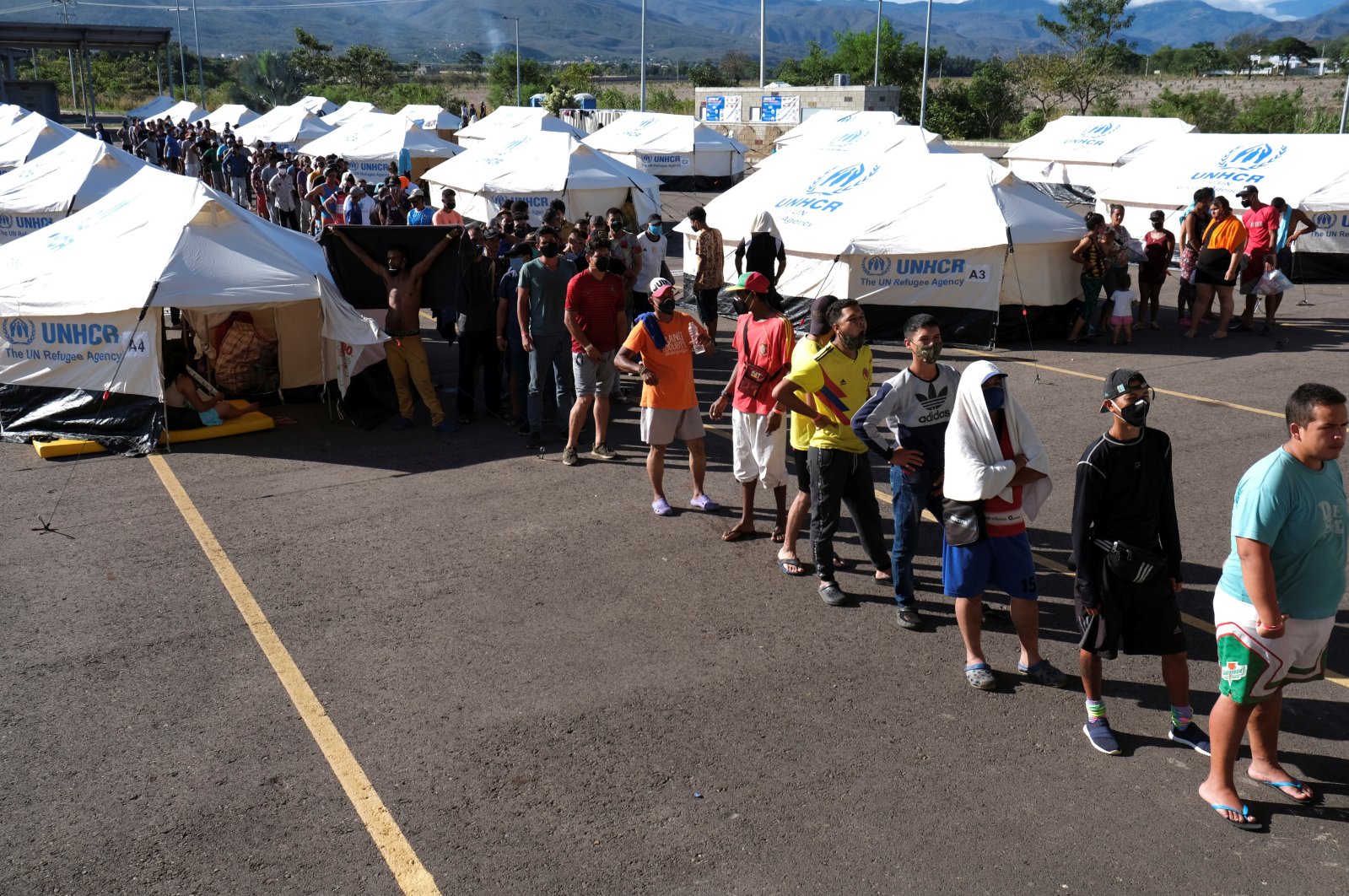 Venezuelan migrants stand in line at a health care center at the Venezuelan border, Cucuta, Colombia, June 16, 2020. (Reuters Photo)
by DAILY SABAH WITH AGENCIES Jun 18, 2020 9:03 am

Nearly 80 million people were displaced last year, more than ever before, the U.N. has revealed, with Syrians, Venezuelans, Afghans, South Sudanese and stateless Rohingya among the worst-affected

The annual report reveals that the number of people seeking safety from conflict and persecution – nearly 80 million – accounts for 1% of all humanity.

"This almost 80 million figure – the highest that UNHCR has recorded since these statistics have been systematically collected – is of course a reason for great concern," said Filippo Grandi, U.N. high commissioner for refugees. "This is by the way approximately 1% of the world population," he told a news briefing.

Some 73% of refugees seek asylum in a neighboring country, defying the populist notion that they flood to the West, Grandi said. "This continues to be a global issue, an issue for all states, but an issue that challenges most directly the poorer countries, not the rich countries – in spite of the rhetoric," he said of the displacement.

The annual report reveals that the number of refugees rose by 9 million from the previous year with Syrians, Venezuelans, Afghans, South Sudanese and stateless Rohingya being the worst-affected. About 1 million Rohingya, most of whom fled a military crackdown in Myanmar in 2017, are packed into camps along the Bangladeshi border, and the coronavirus has become the latest cause of misery. Aid agencies have long warned that the virus could cause chaos in the overcrowded camps, where social distancing is virtually impossible.

This was also the first UNHCR report to include the 3.6 million Venezuelans who have fled their crisis-hit country since 2015. Venezuelans became the world's second-largest refugee group with 3.7 million after the 6.6 million Syrians displaced by their country's war. Grandi said he is “very worried” about the impact of the coronavirus in Latin America, where millions of Venezuelans have fled upheaval at home and could face hardship abroad among lockdowns and other restrictive measures to fight the pandemic.

The Americas have become the world's epicenter of the coronavirus pandemic. “One region about which we’re very worried is, of course, Latin America and South America and in particular where countries host many millions of Venezuelans,” Grandi said in an interview. “They are particularly hit by COVID."

The pandemic has shattered the lives of many of the Venezuelan refugees. More than half are in Colombia illegally and the majority scraped a living in the informal sector. More than 76,000 Venezuelans have already crossed the border, and over 24,000 still want to do so, according to Juan Francisco Espinosa, head of Colombia's migration authority. But Venezuela has now limited entries through the main border posts in Cucuta and Arauca to just 1,200 people a week. President Nicolas Maduro's government argues that Venezuela has far fewer COVID-19 infections than Colombia – 3,150 compared to 57,046 – and that it needs to reduce the influx of returnees to keep the pandemic under control.

"With the international community so divided, so unable, so incapable of making peace, unfortunately, the situation won't stop growing, and I am very worried that next year it will be even worse than this year," he said.

Thursday's report showed that at the end of 2019, nearly 46 million of those displaced remained inside their own country, while 26 million had fled across borders as refugees.