Report exposes extent of anti-Asian racism in US 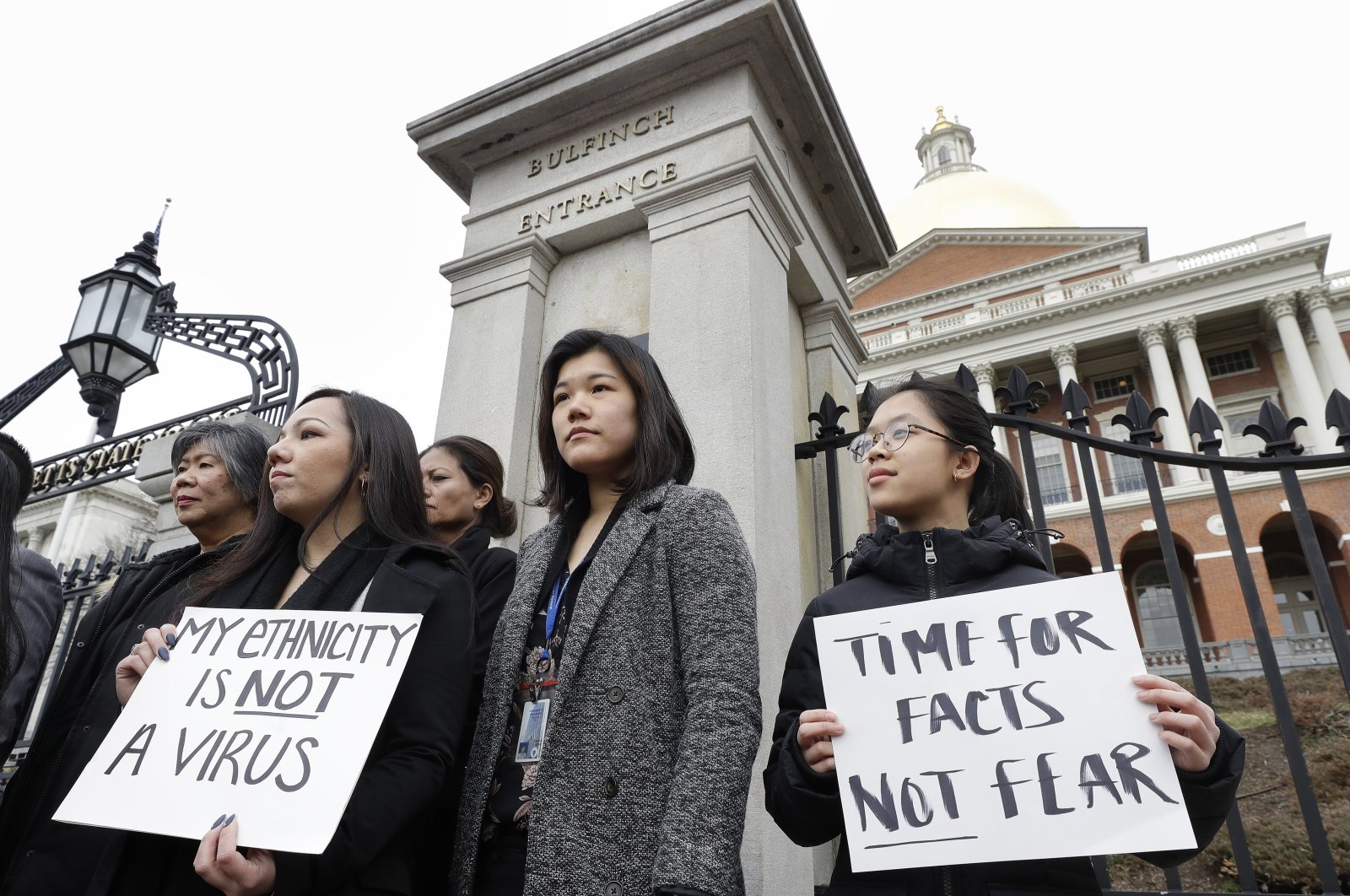 Jessica Wong (F-L) Jenny Chiang (C) and Sheila Vo, from the state's Asian American Commission, stand together during a protest on the steps of the statehouse in Boston, U.S., March 12, 2020. (AP File Photo)
by German Press Agency - DPA May 07, 2021 5:45 pm
RECOMMENDED

At a store in Alhambra, California, a worker refused to ring up Asian American customers, hurling a racial insult at one.

At a school in Texas, students picked on Asian American classmates, saying they had the coronavirus and everyone should stay away from them.

In Muskegon, Michigan, a customer spat on an Asian American worker and said, "Go home and take the COVID-19 with you."

A report from Stop AAPI Hate released Thursday shows the breadth of anti-Asian racism during the COVID-19 pandemic. Racist attacks, some verbal and some physical, were reported in cities such as Alhambra and New York with large Asian populations and Muskegon with few Asian residents.

Some victims were elderly, others children. Some were coughed on or spat on, some slapped or hit, some refused service at businesses, still, others stung by racist words or by people declining to interact with them.

The incidents were reported to Stop AAPI Hate, a group formed in March 2020, where AAPI is an acronym for Asian American Pacific Islander, in response to attacks related to the perception that people of Asian descent were responsible for the coronavirus because of its origins in Wuhan, China. The new study builds on a previous one released two months ago.

In March, people around the country reported more than 2,800 anti-Asian hate incidents to Stop AAPI Hate. In the entire year before that, the group received about 3,800 reports of racial incidents.

The sudden spike could be due in part to a greater awareness that Stop AAPI Hate, founded by a coalition of Asian American advocacy groups, is collecting reports about racist incidents. But law enforcement agencies around the country are also seeing a large increase in reported anti-Asian hate crimes.

New York saw the greatest increase, at 223%, followed by 140% in San Francisco and 80% in Los Angeles, in the first quarter of this year compared with the same period last year, according to a report by the Center for the Study of Hate and Extremism at California State San Bernardino.

Hate crimes are attacks on people or property motivated by race, gender or other protected characteristics. Hate incidents involve name-calling or insults but do not rise to the level of a crime.

The Stop AAPI Hate study includes both types of situations. Nearly two-thirds of the more than 6,600 anti-Asian incidents reported from last March to this March involved verbal harassment. About 18% involved shunning – people deliberately avoiding Asian Americans – and 13% were physical assaults.

Civil rights violations such as workplace discrimination and being refused service at a business were 10%. Online harassment was 7%.

On its website, the group accepts reports in 10 Asian languages including Chinese, Vietnamese, Korean and Tagalog, in addition to English.

"Racism against Asian Americans is systemic and long-standing," said Russell Jeung, co-founder of Stop AAPI Hate and professor of Asian American studies at San Francisco State University. "The more we draw attention to anti-Asian hate, the more Asian Americans know they have a place to report what they're experiencing, and the more we can demonstrate the extent of the problem and advocate for meaningful solutions."

In some instances, attackers say nothing explicitly racist, but victims feel targeted because of their race.

A white woman repeatedly accosted her at a San Francisco park, demanding that she cover her face while jogging, then erupting into curses and insults, said Nguyen, a physician who is Vietnamese American.

One time, the woman removed her neck gaiter and coughed on Nguyen, her husband and daughter, telling the child: "Geez, kid, I'm sorry your mom is such a b--."

Jasmine Li, a Chinese American from Aliso Viejo, said her 10-year-old daughter was waiting for a ride home from school last October when four or five boys asked: "Why are you here? Are you sick? Do you have COVID-19?"

Later, a larger group of students, including the ones who had taunted her earlier, started chanting "Corona. Corona. Corona," when the child walked past them on her way to the school's front office.

Li, an information technology specialist, said she and her husband had heard about racist incidents throughout the pandemic and were worried their daughter would face further attacks. She immediately reported what happened to the principal.

"This is not right," she said. "Children should not be picked on, and thank goodness my daughter is too young to be able to tell what type of things are racially motivated, but we still need to protect her."