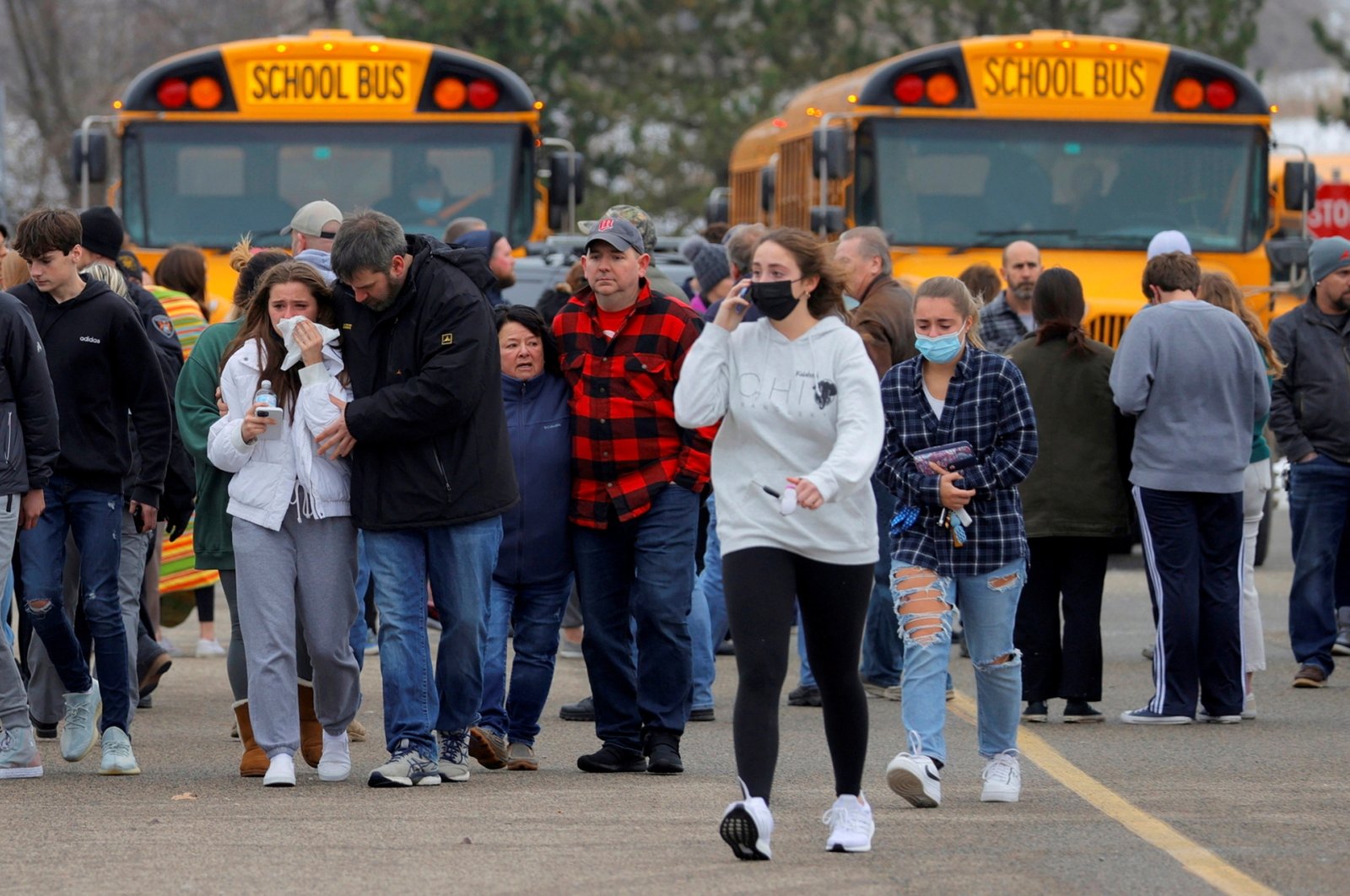 Parents walk away with their kids from the Meijer's parking lot where many students gathered following an active shooter situation at Oxford High School in Oxford, Michigan, U.S. Nov. 30, 2021. (Eric Seals-USA TODAY NETWORK via Reuters)
by ASSOCIATED PRESS Dec 01, 2021 8:55 am
RECOMMENDED

A 15-year-old sophomore opened fire at his Michigan high school, killing three students, including a 16-year-old boy who died in a deputy’s patrol car on the way to a hospital, authorities said. Eight other people were wounded, some critically.

"The person that’s got the most insight and the motive is not talking,” Bouchard said at a news conference late Tuesday night.

The suspect's father had bought the 9 mm Sig Sauer used in the shooting on Friday, Bouchard said, adding that he did not know why the man bought the gun. Bouchard said the suspect had practiced shooting with the gun and "posted pictures of the target and the weapon."

The three students who were killed were 16-year-old Tate Myre, 14-year-old Hana St. Juliana, and 17-year-old Madisyn Baldwin. Bouchard said Myre died in a patrol car as a deputy tried to get him to a hospital.

Bouchard said a teacher who received a graze wound to the shoulder was discharged from the hospital, but seven students ranging in age from 14 to 17 remained hospitalized with gunshot wounds, including a 14-year-old girl who was on a ventilator after surgery.

Bouchard said authorities were made aware of allegations circulating on social media that there had been threats of a shooting at the roughly 1,700-student school, but he said they didn’t know about the rumors until after the attack. He stressed how crucial it is for tips of the kind to be sent to authorities, while also cautioning against spreading social media rumors about the attack before a full investigation.

Undersheriff Mike McCabe also downplayed the significance of an incident in early November when a deer head was thrown off the school roof, which he said was "absolutely unrelated” to the shooting. The vandalism prompted school administrators to post two letters to parents on the school’s website earlier in November, saying they were responding to rumors of a threat against the school but had found none.

Authorities didn't immediately release the shooting suspect's name, but Bouchard said deputies arrested him within minutes of arriving at the school in response to a flood of 911 calls about the attack, which happened shortly before 1 p.m. He said the deputies arrested him after he emerged from a bathroom with the gun, which he said had seven rounds of ammunition still in it.

"I believe they literally saved lives having taken down the suspect with a loaded firearm while still in the building,” Bouchard said.

McCabe said the suspect's parents visited their son where he's being held and advised him not to talk to investigators, as is his right. Police must seek permission from a juvenile suspect's parents or guardian to speak with them, he added.

Oakland County Prosecutor Karen McDonald issued a statement Tuesday evening saying her office expects to issue charges quickly and that an update would be given Wednesday.

Bouchard said the suspect had no previous run-ins with his department and he wasn't aware of any disciplinary history at school.

"That’s part of our investigation to determine what happened prior to this event and if some signs were missed how were they missed and why,” he said.

President Joe Biden, before delivering remarks at a community college in Rosemount, Minnesota, said: "As we learn the full details, my heart goes out to the families enduring the unimaginable grief of losing a loved one."

The school was placed on lockdown after the attack, with some children sheltering in locked classrooms while officers searched the premises. They were later taken to a nearby Meijer grocery store to be picked up by their parents.

The district said in a statement that all of its schools would be closed for the rest of the week.

Isabel Flores, a 15-year-old ninth-grader, told WJBK-TV that she and other students heard gunshots and saw another student bleeding from the face. They then ran from the area through the rear of the school, she said.

Authorities said they were searching the suspect's cellphone, school video footage and social media posts for any evidence of a possible motive.

School administrators had posted two letters to parents on the school’s website in November, saying they were responding to rumors of a threat against the school following a bizarre vandalism incident.

According to a Nov. 4 letter written by Principal Steve Wolf, someone threw a deer head into a courtyard from the school’s roof, painted several windows on the roof with red acrylic paint and used the same paint on concrete near the school building during the early morning hours. Without specifically referencing that incident, a second post on Nov. 12 assured "there has been no threat to our building nor our students.”

Both the sheriff and undersheriff emphasized that Tuesday’s shooting was unrelated to the deer head or any earlier investigation by their office.

"That was a different incident, different student,” McCabe said.

A concerned parent, Robin Redding, said her son, Treshan Bryant, is a 12th grader at the school but stayed home Tuesday. Redding said her son had heard threats that there could be a shooting.

"This couldn’t be just random,” she said.

Bryant said he texted several younger cousins in the morning and they said they didn’t want to go to school, and he got a bad feeling. He asked his mom if he could do his assignments online.

Bryant said he had heard vague threats "for a long time now” about plans for a shooting.

At a vigil at Lakepoint Community Church on Tuesday night, Leeann Dersa choked back tears as she hugged friends and neighbors. Dersa has lived nearly all of her 73 years in Oxford and her grandchildren attended the high school.

"Scared us all something terrible. It's awful,” Dersa said of the shooting.

Pastor Jesse Holt said news of the shooting flooded in to him and his wife, including texts from some of the 20 to 25 students who are among the 400-member congregation.

"Some were very scared, hiding under their desks and texting us, ‘We’re safe, we’re OK. We heard gunshots, but we’re OK.’ They were trying to calm us, at least that’s how it felt,” he said.