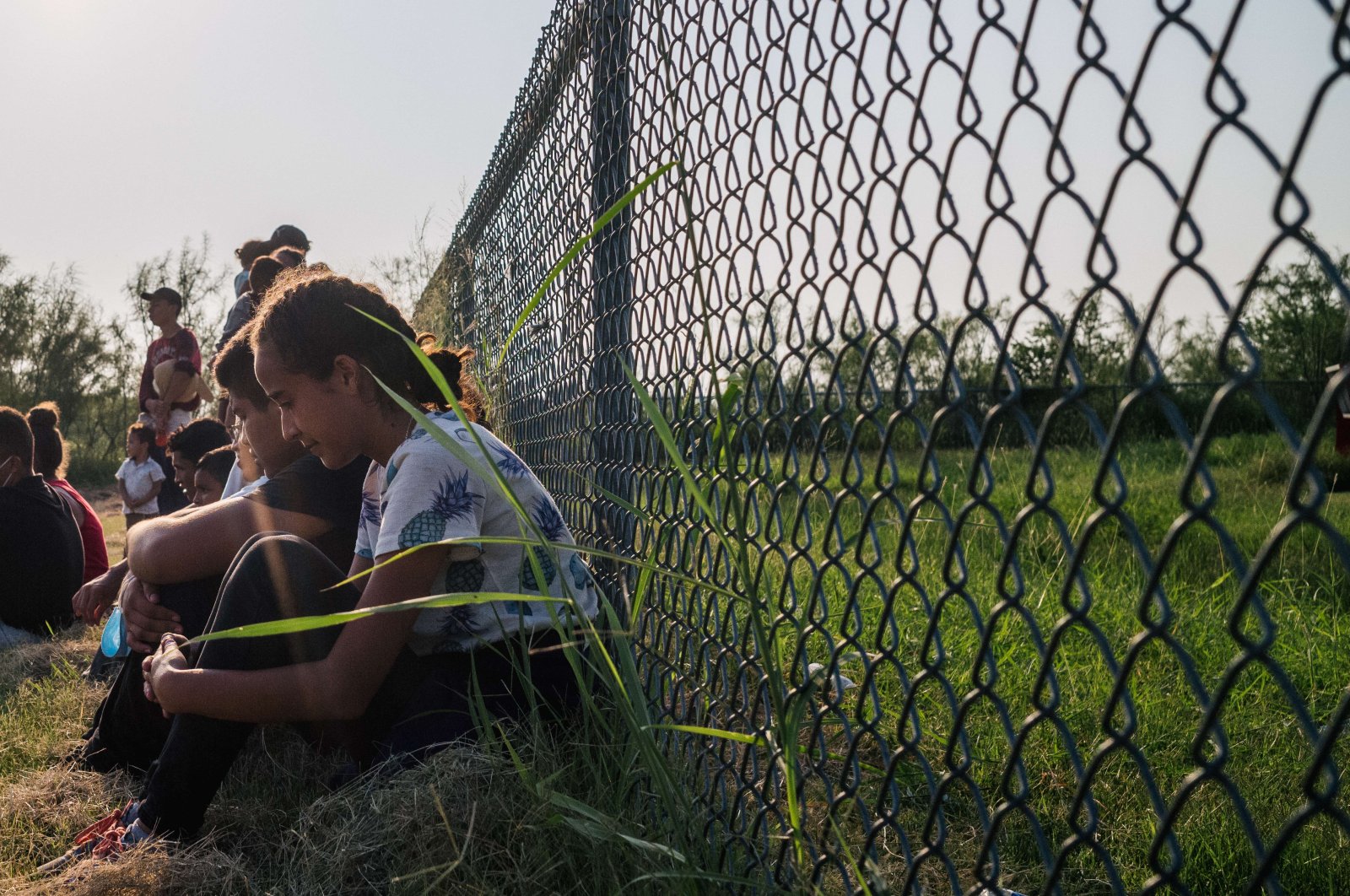 Immigrants from Honduras wait to be accounted for and taken to a border patrol processing facility after crossing the Rio Grande into the U.S., in La Joya, Texas, U.S., June 21, 2021. (AFP Photo)
by DAILY SABAH WITH AGENCIES Jun 22, 2021 12:12 pm

The U.S.' human rights obligations do not seem to apply to immigrant children, who suffer from rotten food, lack of clothes and crowded living conditions at detention centers managing their care, leading to a rise in depression among them

Despite mounting pressure from the international community and the U.S. media, the Biden administration is failing to provide migrant children with decent living conditions, according to 17 testimonials filed in a court case on Monday, in which the kids described crowded shelters, spoiled food, lack of clean clothes and struggles with depression.

The children – aged 9 to 17 and largely from Guatemala, Honduras and El Salvador – in some cases spoke of waiting for months inside emergency shelters overseen by the U.S. government while struggling with the conditions, including trouble sleeping under bright lights and infrequent phone calls to family members.

The testimonials offer a detailed look into the conditions within a network of emergency shelters hastily erected by the administration of U.S. President Joe Biden to deal with a sharp rise in the number of unaccompanied migrant children arriving at the U.S.-Mexico border.

In recent months, the children have been moved more quickly out of the crowded Border Patrol, a sprawling tent facility in the South Texas city of Donna, and into the emergency shelters as part of efforts to connect them with family members or other sponsors in the United States.

The children's testimonials, recorded between March and early June, suggest the Biden administration, which has promised a more humane approach to immigration, in some cases struggled to provide optimal care for the children.

According to Reuters, about 14,500 unaccompanied children are currently in the care of the U.S. Department of Health and Human Services (HHS), down from 22,000 in late April.

In one testimonial, a 13-year-old girl from Honduras said she had been placed on a suicide watch list while at an emergency shelter at Fort Bliss in El Paso, Texas. The girl, who had spent nearly two months at the facility as of June 4, said she was separated from her father when crossing a river into the United States.

"The food here is horrible," she wrote. "Yesterday we were given hamburgers but I couldn’t eat it because there was a foul odor coming from the bread ... I really only eat popsicles and juice because that is the only food that I can trust."

A 14-year-old Guatemalan girl who was detained at an emergency facility in Houston in April said it was very hot and that she was often thirsty. She said the girls had to drink expired milk when they ran out of water. She saw eight girls faint because of the heat and the lack of water, she said, and staff took them to a nearby hospital.

A 17-year-old girl from Guatemala detained at Fort Bliss described sleeping in a large white tent with about 300 girls, on cots stacked on top of each other. She said it was hard to sleep due to the rattling noise the tent’s metal beams made at night, according to a declaration dated April 28. She said it was cold and that dirt came into the tent. The girl said she had not been able to get information on her case and that she had struggled to get an appointment with a counselor to talk about her depression.

"A lot of the girls here cry a lot," she said. "A lot of them end up having to talk to someone because they have thoughts of cutting themselves."

A 17-year-old teen from Honduras said they slept in a large area in the Dallas convention center, in which they had been told there were 2,600 kids. "I feel asphyxiated having so many people around me," the teen said in a declaration dated March 29.

Earlier in March, the Biden administration for weeks tried to keep secret the nasty conditions of the detention centers by denying access to members of the news media. They then faced a mountain of criticism over series of pictures showing immigrant children in U.S. custody at the border sleeping on mats under foil blankets, separated in groups by plastic partitions.

Administration officials have steadfastly refused to call the detention of more than 15,000 children in U.S. custody, or the conditions they’re living under, a crisis. But they have stymied most efforts by outsiders to decide for themselves. Officials barred nonprofit lawyers who conduct oversight from entering a Border Patrol tent. And federal agencies have refused or ignored dozens of requests from the media for access to detention sites. Such access was granted several times by the administration of President Donald Trump.

Border agencies under Trump allowed limited media tours of both Homeland Security and Health and Human Services facilities. Several of those visits revealed troubling conditions inside, including the detention of large numbers of children as young as five separated from their parents. Under Biden, the agencies also have denied full access to nonprofit lawyers who conduct oversight of facilities where children are detained. Those oversight visits occur under a federal court settlement.

The photos were released by Rep. Henry Cuellar, a Texas Democrat from the border city of Laredo. Cuellar said he released the photos in part because the administration has refused media access to the Donna tent. He said he also wanted to draw attention to the extreme challenges that border agents face in watching so many children, sometimes for a week or longer despite the Border Patrol’s three-day limit on detaining minors.

“We ought to take care of those kids like they’re our own kids,” Cuellar told The Associated Press (AP).

Later, the Biden administration let journalists into a Texas border facility housing young migrants, but it continued to keep reporters out of other, detention-like facilities filled well over their capacities. A reporter and film crew were allowed to enter a facility in Carrizo Springs, Texas operated by the U.S. Department of Health and Human Services' Office of Refugee Resettlement.

They accompanied a delegation of White House officials and members of Congress to inspect the facility for minors who arrived at the border unaccompanied by their parents. They saw the reception and dining areas, as well as the medical clinic, but they were not allowed to talk to the minors.