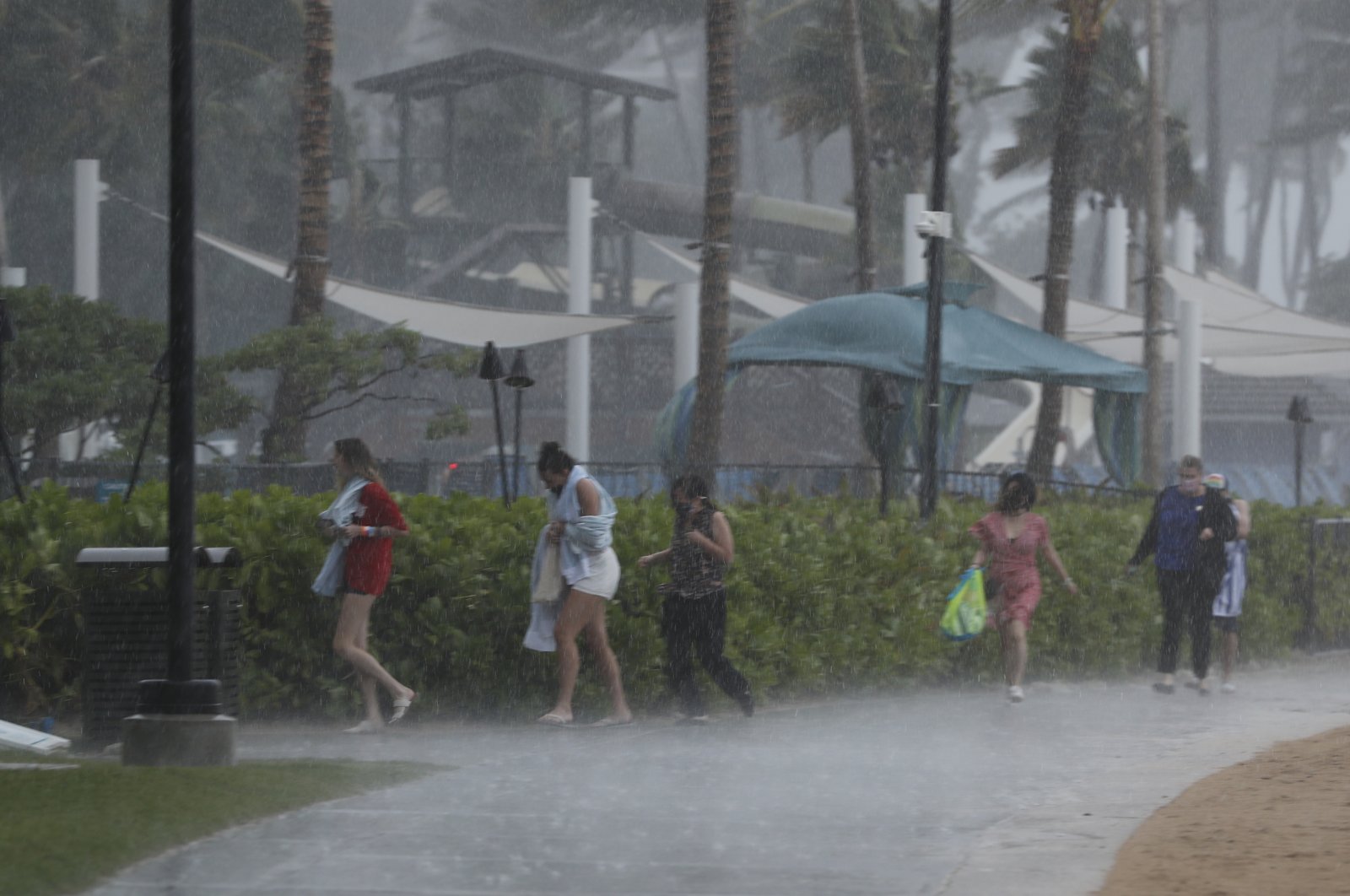 A dangerous storm with high winds and extremely heavy rain flooded roads across Hawaii, with officials warning Monday of potentially worse conditions ahead, as an unusually strong winter storm is clobbering the Hawaiian Islands from the empty shores of Oahu’s Waikiki Beach to the snowy summit of the Big Island’s highest peak and raising the threat of dangerous flash floods, landslides and crashing tree limbs

The strong storm over the United States' only island state left eloping couples without weddings and tourists stuck indoors. It also threatened the state’s infrastructure with a deluge of rain and wind.

Five boys between the ages of 9 and 10 were rescued from a raging creek by Honolulu Fire Department workers, a statement from the agency said.

Weather officials warned that slow-moving thunderstorms, high winds and heavy rains could persist through Wednesday and Gov. David Ige issued a state of emergency for all of the state's islands Monday night.

Veterans and survivors of the attack on Pearl Harbor 80 years ago planned to meet for the anniversary celebration Tuesday morning at Pearl Harbor. Navy spokesperson Brenda Way told The Associated Press in an email Monday that she has heard of no discussion of canceling the event because of the storms.

The National Weather Service said the storm brings the threat of "catastrophic flooding” in the coming days as a low pressure system slowly moves from east to west and lingered on the edge of the archipelago. The storm knocked out power in communities across Hawaii and the worst of the rain was just arriving in the state's most populous island of Oahu Monday evening.

"Now is the time to make sure you have an emergency plan in place and supplies ready should you need to move away from rising water,” Ige said in a statement.

On Oahu, where four shelters had been opened, most of the beaches in Waikiki were empty Monday as only a few people walked with umbrellas during passing heavy showers. Roadways were flooding in the area and cars crept through downtown as water gushed out of manhole covers.

On Maui, power outages and flooding already have been reported, with more than a foot (30 centimeters) of rain falling in some areas.

The relentless rain forced three couples from the U.S. mainland to postpone their Maui elopements, said Nicole Bonanno, owner of Bella Bloom Floral, a wedding florist and boutique in Wailea.

"The roads, everything are a mess,” she said. "There are lots of trees down.”

Maui resident Jimmy Gomes was waiting for the lights to come back at his home on Monday after losing power at 6 p.m. Sunday. His rain gauge measured 7 inches (17.78 centimeters): "I haven’t seen this kind of rain in a long time,” he said.

"Last night the wind was howling,” he said. "But this morning, it came in really foggy and it rained, then it stopped.”

Some areas south of Hilo were hit hard with extremely heavy rain over the weekend, weather officials said.

All islands still face the threat of flash flooding, lightning strikes, landslides and strong winds over the next two days, according to the National Weather Service.

Oahu and Kauai could see the brunt of the storm Monday and Tuesday. But for Maui and the Big Island, which have already been soaked, "it’s not going to take a lot of additional rain to really lead to big problems,” National Oceanic and Atmospheric Administration meteorologist Robert Ballard said.

The winter weather system known as a "Kona low” prompted emergency alerts throughout the weekend while delivering wind, rain and even blizzard conditions at some of Hawaii’s highest elevations.

A weekend blizzard warning was issued for the state’s highest peak, on the Big Island.

Snow is not rare at the summit of Mauna Kea, which is nearly 14,000 feet (4,270 meters) high. The last time there was a blizzard warning for the summit was in 2018. No residents live at the summit, but there are telescope observatories and other offices where officials work.

The weather service said there were reports of 8 inches (20 centimeters) of snow on the road below the top of Mauna Kea, and officials were working to get to the summit to get more measurements. The forecast was for a foot of snow at the mountain’s peak.

There were also strong winds, with gusts of nearly 90 mph (138 kph) recorded atop Mauna Kea.

Other areas at lower elevations also saw strong winds, with gusts above 50 mph (80 kph) recorded at several locations across the state, according to weather officials.

Kona low is a type of low pressure system that forms near Hawaii during the winter season, and it has some unique meteorological characteristics, said Ballard, the National Weather Service’s science and operation officer in Hawaii.

"What we tend to see are a tremendous amount of tropical moisture gets drawn up from equatorial regions. Kona lows tend to move slowly and so they can keep heavy rain and thunder showers focused over one area for a prolonged amount of time, and they can also cause pretty strong to damaging winds,” Ballard said.

Hawaii has aging dams across the state that have been problematic during previous storms. In 2006, an earthen wall of Kauai’s Kaloko Reservoir collapsed during heavy rain and sent a wave of water and mud rushing down a hillside. Seven people, including a pregnant woman, were killed.

Rainfall in March caused fears that a dam had breached on Maui when floodwaters destroyed homes and inundated roadways. The same storm system brought damaging floods to Oahu and a landslide on Kauai.

Ballard said other state and federal agencies monitor dams, but that these are the conditions that people need to be cautious of.

"It’s just a situation that we need to continue to monitor and be aware of and make sure that folks understand that this is the type of situation where we can get flash flooding that happens very, very suddenly,” Ballard said.