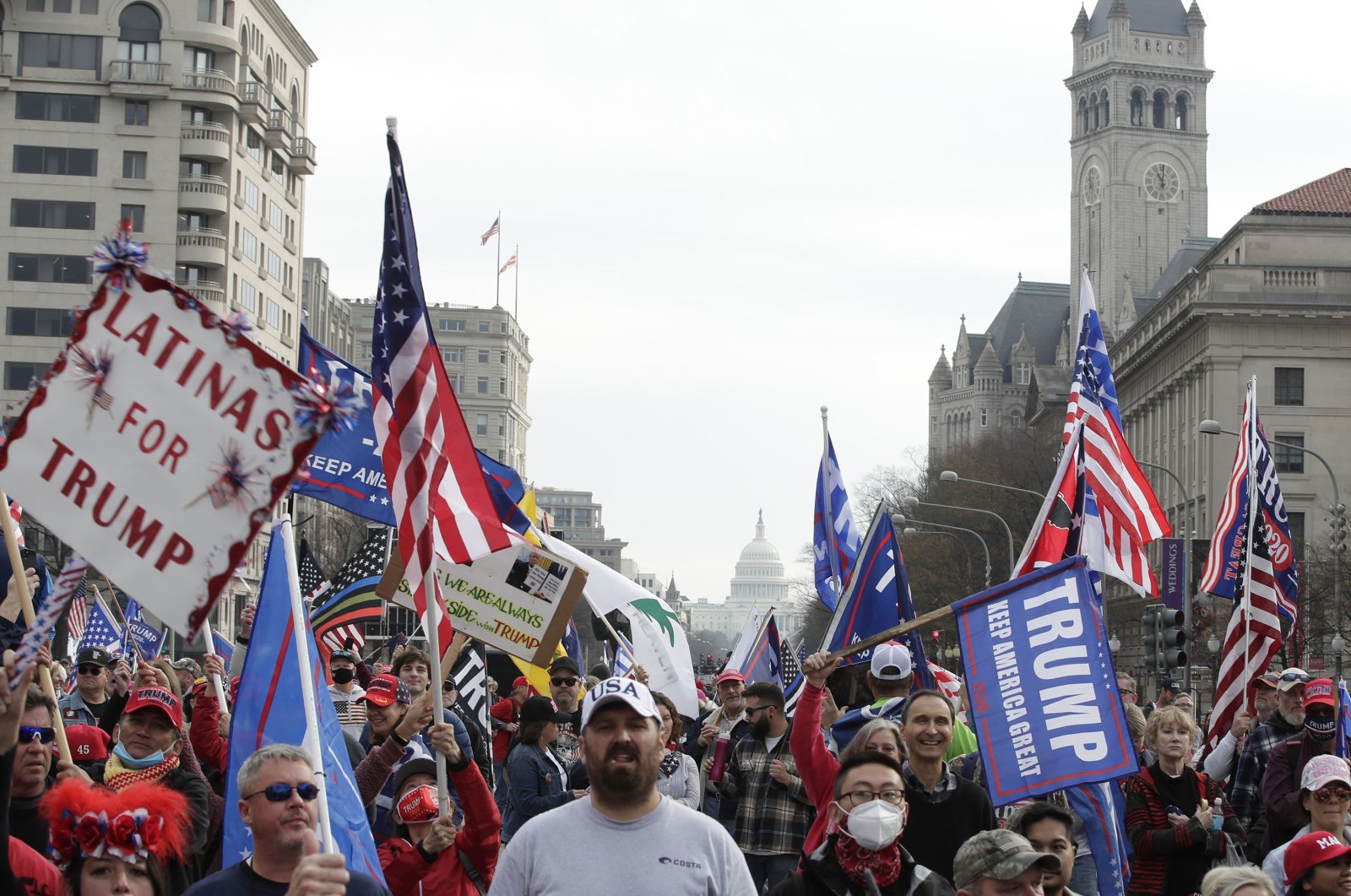 With the U.S. Capitol building in the background, supporters of President Donald Trump demonstrate during a rally at Freedom Plaza in Washington, D.C., Dec. 12, 2020. (AP Photo)
by ASSOCIATED PRESS Dec 13, 2020 9:08 am
RECOMMENDED

Thousands of supporters of President Donald Trump returned to Washington for weekend rallies to back his desperate efforts to subvert the election that he lost to Joe Biden.

Sporadic fights broke out between pro-Trump and anti-Trump demonstrators after sundown Saturday. WRC-TV reported that four people were taken to a hospital with stab wounds, and the Metropolitan Police Department told the station that 23 people were arrested.

The gatherings of mostly unmasked Trump loyalists were intended as a show of force just two days before the Electoral College meets to formally elect Biden as the 46th president. Trump, whose term will end Jan. 20, refuses to concede, while clinging to baseless claims of fraud that have been rejected by state and federal courts, and Friday by the Supreme Court.

Trump tweeted his apparent surprise Saturday morning at the rallies, publicly known for weeks: "Wow! Thousands of people forming in Washington (D.C.) for Stop the Steal. Didn’t know about this, but I’ll be seeing them! #MAGA"

Trump left the White House around midday for the trip to the Army-Navy football game at the U.S. Military Academy in West Point, New York. As the Marine One helicopter passed over a rally on the National Mall, cheers went up.

Michael Flynn, the former national security adviser recently pardoned by Trump, was speaking from the stage at the time.

"That’s pretty cool. Imagine just being able to jump in a helicopter and just go for a joy ride around Washington,” said Flynn, whose pardon wiped away his conviction for lying to the FBI during the Russia investigation.

At a pro-Trump demonstration in Washington a month ago, Trump thrilled supporters when he passed by in his motorcade en route to his Virginia golf club.

That demonstration, which drew 10,000 to 15,000 people to the capital, ended late in the evening with scattered clashes between Trump's loyalists and local activists near Black Lives Matter Plaza near the White House.

But while Saturday's rallies, including one on Freedom Plaza downtown, were smaller than on Nov. 14, they drew a larger contingent of the Proud Boys, a neo-fascist group known to incite street violence. Some wore bulletproof vests as they marched through town.

The group saw its profile raised after Trump in September famously told them to "stand back and stand by.”

After the rallies ended, downtown Washington quickly devolved into crowds of hundreds of Proud Boys and combined forces of antifa and local Black activists – both sides seeking a confrontation in an area flooded with police officers. As dusk fell, they faced off on opposite sides of a street, with multiple lines of city police and federal Park Police, some in riot gear, keeping them separated.

One Proud Boy yelled out, "You cops can’t be everywhere!” The Proud Boys later dispersed.

Antifa activists also were more organized this time, with their own bicycle corps to form bike walls to match those of the police.

Earlier in the day, a group of about 50 men in the Proud Boys' black and yellow circled the perimeter of Black Lives Matter Plaza, where about 200 anti-Trump demonstrators were rallying.

They chanted vulgar slogans and at one point started singing "Jingle Bells.” They were apparently under orders not to engage with hecklers. One man who was talking back to people was yelled at and told "Don’t interact!"

The assembly on the National Mall, called the "Jericho March,” was described on its website as a "prayer rally” with speakers "praying for the walls of corruption and election fraud to fall down.”

The rally on Freedom Plaza also featured a series of speakers pushing debunked claims of election fraud to a receptive audience.

Sylvia Huff, a demonstrator who came from Gloucester, Virginia, to show her support for Trump, said the legal defeats hadn't shaken her belief that he won the election.

"I believe the courts were on the take, too,” she said. The Supreme Court, where three of the nine justices were appointed by Trump, "was just afraid of a political backlash,” she said.

Among the speakers was Sebastian Gorka, a former Trump adviser, who urged demonstrators not to give up even after Friday’s Supreme Court decision. He said he wanted to send Trump a video and held up his phone, cueing the flag-waving crowd to chant "Stop the Steal.”