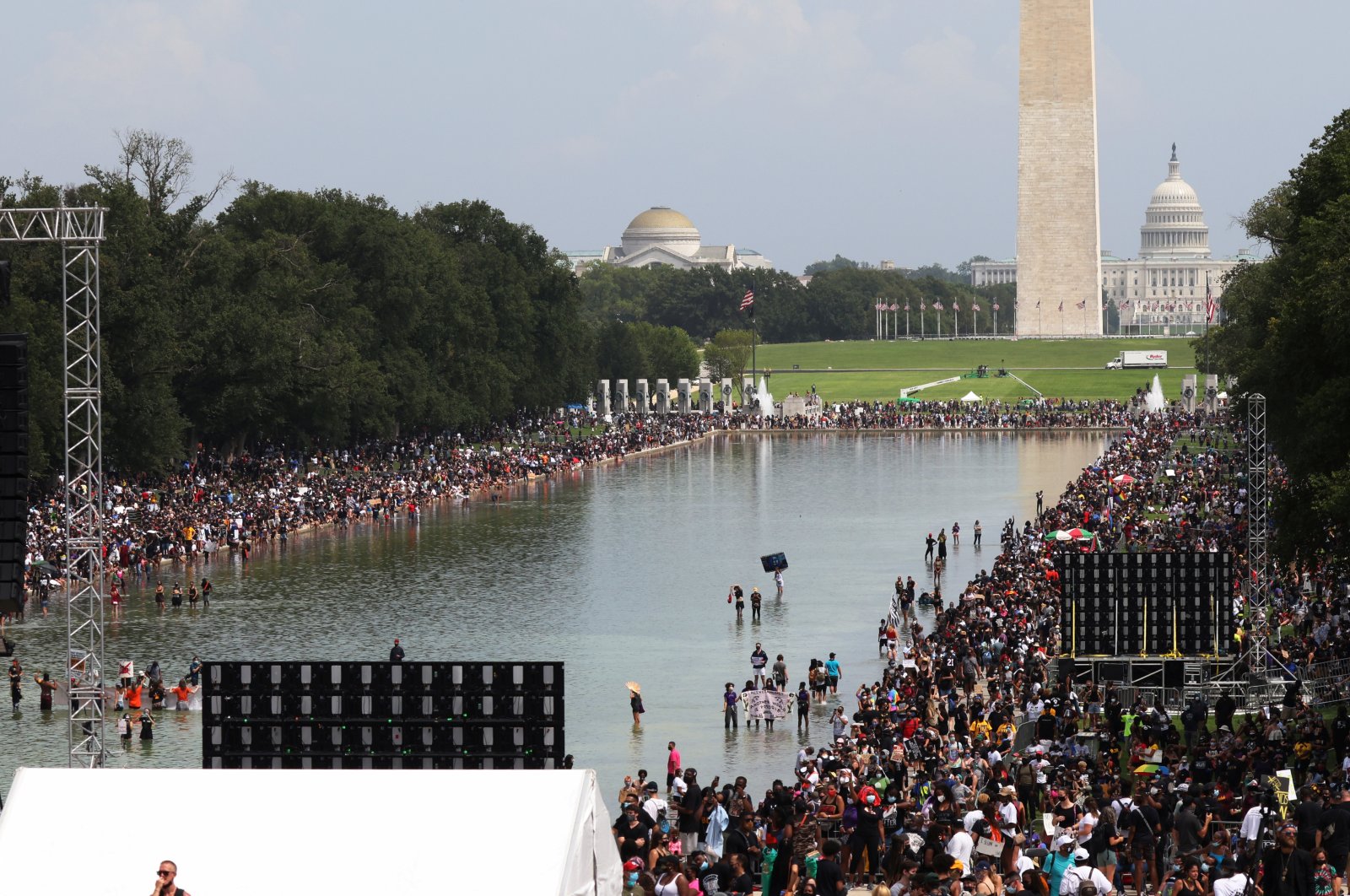 People gather around the Lincoln Memorial Reflecting Pool during the 'Get Your Knee Off Our Necks' march in support of racial justice, in Washington, U.S., Aug. 28, 2020. (Reuters Photo)
by REUTERS Aug 28, 2020 10:13 pm
RECOMMENDED

Thousands of people took part in a march in Washington on Friday to denounce racism, on the anniversary of the march in 1963 where civil rights leader Martin Luther King Jr. made his historic "I Have a Dream" speech.

"You might have killed the dreamer, but you can't kill the dream," civil rights leader Reverend Al Sharpton told Friday's crowd.

Activists and politicians gave speeches, including Democratic vice presidential nominee Kamala Harris, who appeared in a recorded video. Many referenced John Lewis, the late lawmaker, who spoke at the 1963 march.

They also referred to the importance of voting in November's election and the links between activism for black civil rights, disability rights and LGBT rights and against gun violence, among other causes.

"Americans are marching together, many for the first time, and we're demanding real, lasting structural change," King added.

The half-mile march from the Lincoln Memorial to the Martin Luther King Memorial, on a hot, humid day in the U.S. capital, comes amid a summer of racial unrest book-ended by two high-profile incidents in which black men were shot by police.

Nationwide protests began in May, sparked by the killing of George Floyd, an African-American man who died after a Minneapolis police officer kneeled on his neck for nearly nine minutes.

And earlier this week, protests broke out in Kenosha, Wisconsin, after police officers shot another African-American man, Jacob Blake, multiple times in front of his children. Though Blake survived the shooting, lawyers have said he has been paralyzed.

George Floyd's brother, Philonise Floyd, appeared on stage, flanked by his wife and other family members. At times, he stopped to collect himself, apparently overcome with emotion.

"I wish George was here to see this," he said.

Allisa Findley, the sister of Botham Jean, an African-American man killed in Dallas by an off-duty police officer who said she mistook his apartment for her own, said: "I am tired of adding new names, adding new hashtags to an already long list of victims of police terror. We cannot allow our brothers and sisters to only be remembered for how they died."

Corrada Shelby, a 49-year-old human resources executive, said she joined the march to ensure the movement for racial equality does not fizzle out.

"This year the march is extra special because it is a continuation of the George Floyd protests," she said. "I'm here to empower our people and to make sure we continue the fight."

Jamaal Budik, a 23-year-old history student from Baltimore, said it was important for elected officials to understand that what had happened to Floyd and Blake could not continue. "We just want what has been long denied to us – racial justice," Budik said.

Friday's protest, called "Commitment March: Get Your Knee Off Our Necks," was planned by Sharpton's National Action Network.

The march comes amid the continuing coronavirus pandemic, in which black people have suffered disproportionately. Black people are more likely to be sickened and die from the virus and to lose jobs from the economic fallout, statistics show.

At one point, a speaker at the demonstration directed attendees to stand with their arms out to ensure there was enough distance between them. Staff wiped down the podium and microphones between speakers.

Though a lot of people wore masks, many did not.

Kerrigan Williams, a founder of Freedom Fighters DC, said the activist group was organizing its own march later on Friday to promote a more radical agenda that includes replacing police departments with other public safety systems.

Separately, a wing of the Movement for Black Lives, a network of black activists and organizations, has scheduled the "Black National Convention" on Friday night, following national conventions by the Democratic and Republican parties over the past two weeks.