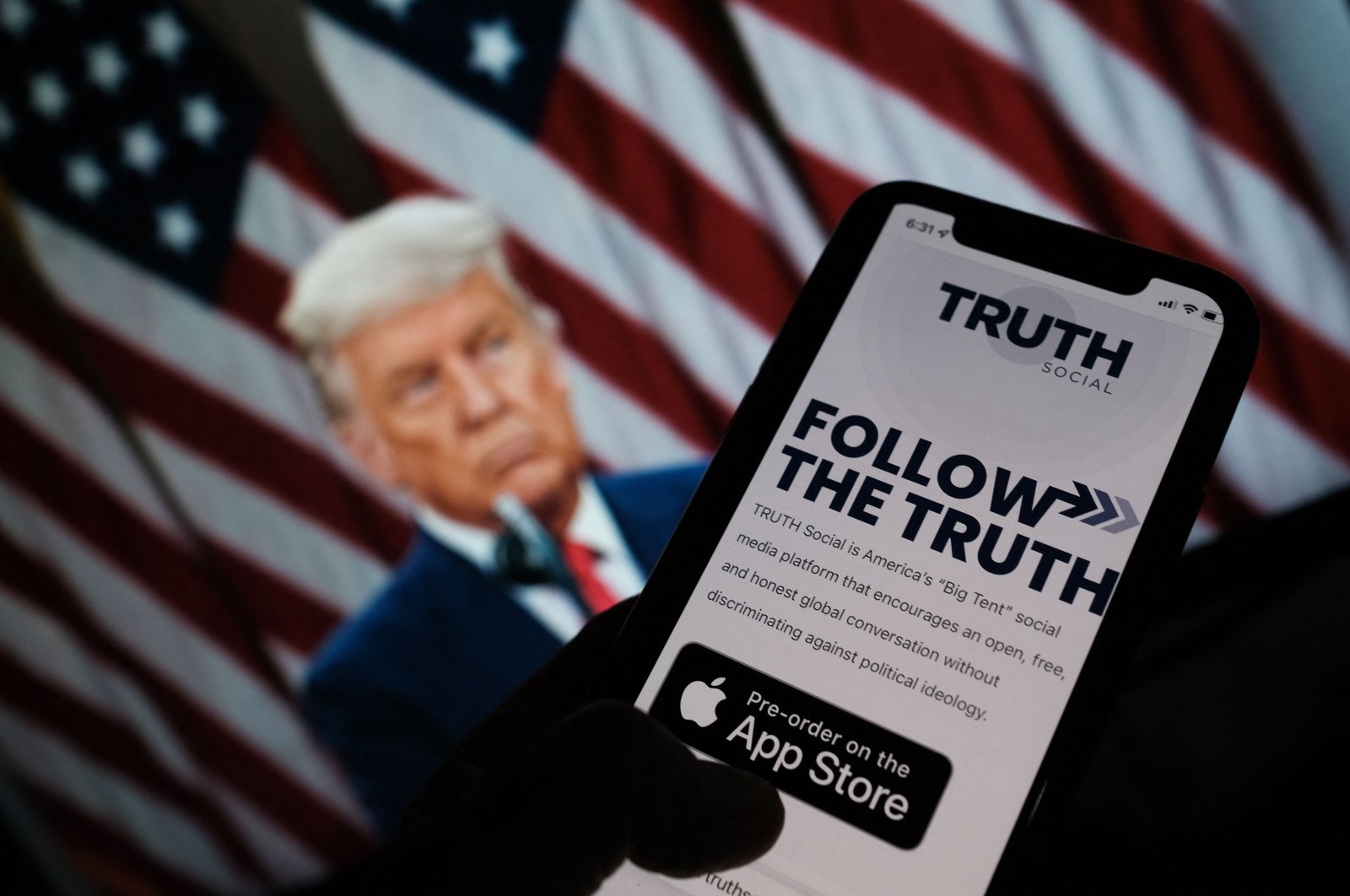 This illustration photo shows a person checking the app store on a smartphone for "Truth Social," with a photo of former U.S. President Donald Trump on a computer screen in the background, in Los Angeles, U.S., Oct. 20, 2021. (AFP Photo)
by Agencies Oct 21, 2021 8:40 am
RECOMMENDED

Nine months after being expelled from social media for his role in inciting the Jan. 6 Capitol insurrection, former President Donald Trump said Wednesday he's launching a new media company with its own social media platform.

Trump says his goal in launching the Trump Media & Technology Group (TMTG) and its "Truth Social" app is to create a rival to the Big Tech companies that have shut him out and denied him the megaphone that was paramount to his national rise.

"We live in a world where the Taliban has a huge presence on Twitter, yet your favorite American President has been silenced," he said in a statement. "This is unacceptable.”

Conservative voices actually do well on traditional social media. On Wednesday, half of Facebook's 10 top performing link posts were from conservative media, commentators or politicians, according to a daily list compiled by a New York Times technology columnist and an internet studies professor using Facebook's own data. Trump has spoken about launching his own social media site ever since he was barred from Twitter and Facebook.

An earlier effort to launch a blog on his existing website was abandoned after the page drew dismal views. TMTG has not set its sights low. In addition to the Truth Social app, which is expected to soft-launch next month with a nationwide rollout early next year, the company says it is planning a video-on-demand service dubbed TMTG+ that will feature entertainment programming, news and podcasts.

One slide in a TMTG presentation on its website includes a graphic of TMTG’s potential competitors, which range from Facebook and Twitter to Netflix and Disney+ to CNN. The same slide suggests that over the long term TMTG will also become a power in cloud computing and payments and suggests it will go head-to-head with Amazon, Microsoft, Google and Stripe.

The same graphics also feature a user named Jack's Beard, who in one image fumes when an employee pushes back on an order to delete a user and its posts, calling it "kinda an overreach.” The Jack's Beard account uses the handle @jack, which is Dorsey's handle on the real Twitter; Dorsey's long scraggly beard has also drawn attention during his congressional appearances over Zoom.

Truth Social's terms of service, meanwhile, bar users from annoying any of the site's employees and from statements that "disparage, tarnish, or otherwise harm, in our opinion, us and/or the Site." It was not immediately clear who the "us” in that statement refers to. In a release, the new venture announced it had been created through a merger with Digital World Acquisition Corp. (DWA), and said it seeks to become a publicly listed company.

DWA, based in Miami, is a special-purpose acquisition company, or SPAC. Such publicly traded companies are designed to list the shares of a private company more quickly than a traditional initial public offering. In practice, that means the SPAC acquires a private firm and then changes its name and other details to those of the acquired firm. SPACs pay for their acquisitions with cash provided by investors who bought into the SPAC’s initial public offering (IPO). DWA's Sept. 8 IPO raised $287.5 million, according to a filing with the Securities and Exchange Commission (SEC).

DWA said it has raised roughly $293 million in cash, which it will use to grow TMTG’s ventures. Among the company’s biggest shareholders are several institutional investors, including Lighthouse Investment Partners, D. E. Shaw & Co., and Radcliffe Capital Management, according to an SEC filing. The deal has an initial enterprise value, a measure that takes into account a company's total debts and assets, of $875 million, according to the release.

In May, former U.S. leader launched a blog called "From the Desk of Donald J. Trump," which was touted as a major new outlet – but he pulled it from the internet just a month later. Former Trump aide Jason Miller launched a social network called Gettr earlier this year, but the former president has not yet joined it. Shortly after Truth Social was announced, Miller congratulated Trump on "re-entering the social media fray."

Trump, meanwhile, has been holding public events, including campaign-style rallies, as he seeks to remain the nation's most influential Republican. He has teased a potential 2024 presidential run but has made no announcement on his political future.