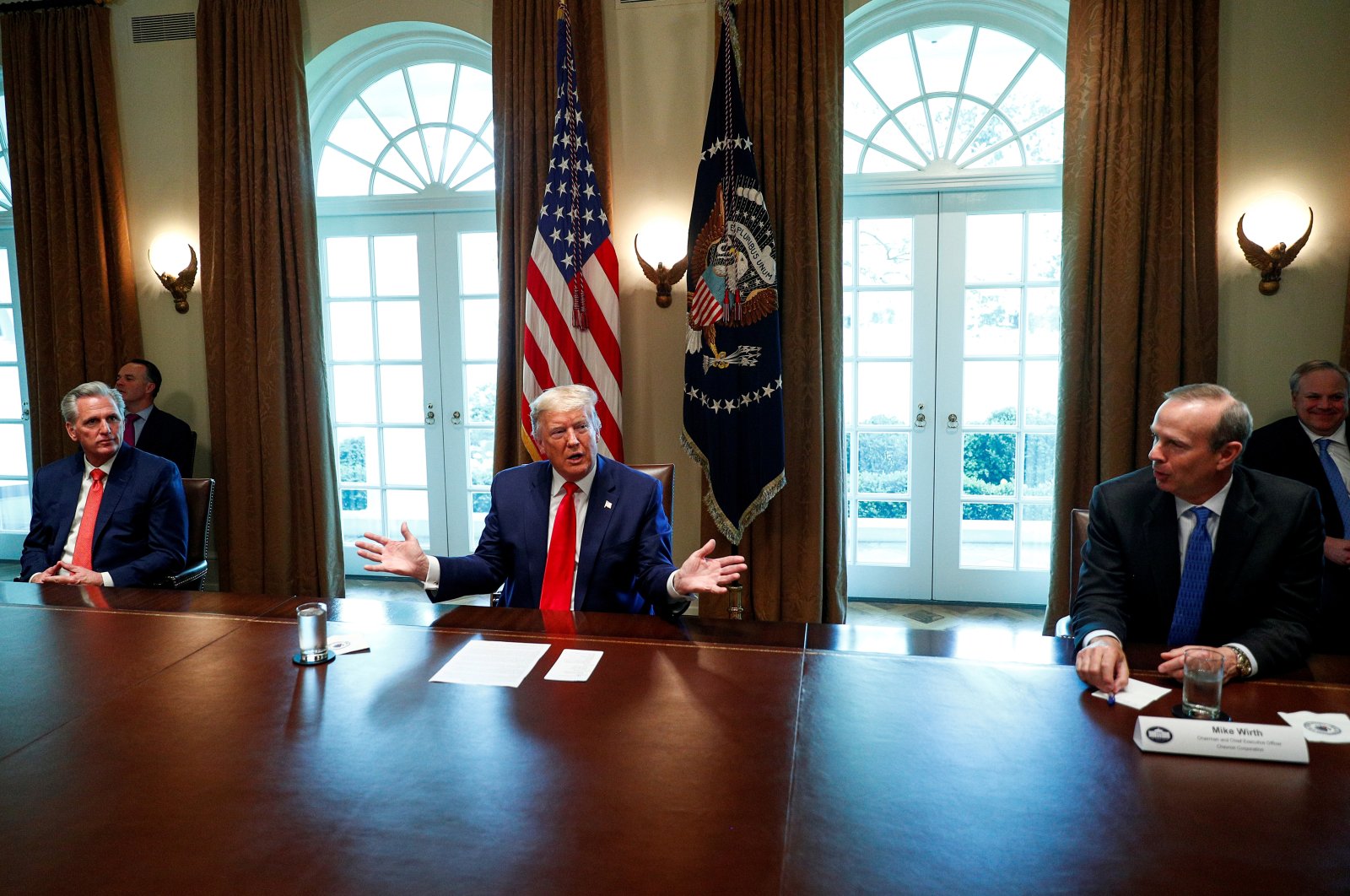 "The President bears responsibility for Wednesday's attack on Congress by mob rioters," said McCarthy, a Trump ally who has repeated the president's unfounded criticism about the validity of the 2020 presidential election. "He should have immediately denounced the mob when he saw what was unfolding."

Trump is on the verge of being impeached for a second time in a fast-moving House vote, just a week after he encouraged loyalists to "fight like hell" against election results and then a mob of supporters stormed the U.S. Capitol.

"We are debating this historic measure at a crime scene," said Rep. Jim McGovern, D-Mass.

Security was exceptionally tight Wednesday, shocking images of National Guard troops massed at the iconic Capitol, with secure perimeters around the complex and metal-detector screenings required for lawmakers entering the House chamber.

While Trump's first impeachment in 2019 brought no Republican votes in the House, a small but significant number of leaders and lawmakers are breaking with the party to join Democrats, saying Trump violated his oath to protect and defend U.S. democracy.

McConnell also called major Republican donors this weekend to gauge their thinking about Trump and was adamantly told that Trump had clearly crossed a line. McConnell told them he was through with Trump, said the strategist, who demanded anonymity to describe McConnell's conversations.

The stunning collapse of Trump's final days in office, along with warnings of more violence ahead, leaves the nation at an uneasy and unfamiliar juncture before Democrat Joe Biden is inaugurated on Jan. 20.

Trump, who would become the only U.S. president twice impeached, faces a single charge of "incitement of insurrection."

The four-page impeachment resolution relies on Trump's own incendiary rhetoric and the falsehoods he spread about Biden's election victory, including at a White House rally on the day of the Jan. 6 attack on the Capitol, in making its case for "high crimes and misdemeanors" as demanded in the Constitution.

Trump took no responsibility for the riot, suggesting it was the drive to oust him rather than his actions around the bloody riot that was dividing the country.

A Capitol police officer died from injuries suffered in the riot and police shot and killed a woman during the siege. Three other people died in what authorities said were medical emergencies. Lawmakers scrambled for safety and hid as rioters took control of the Capitol, delaying by hours the tally of Electoral College votes that was the last step in finalizing Biden's victory.

The outgoing president offered no condolences for those dead or injured, only saying, "I want no violence."

At least five Republican lawmakers, including third-ranking House GOP leader Liz Cheney of Wyoming, were unswayed by the president's logic. The Republicans announced they would vote to impeach Trump, cleaving the Republican leadership, and the party itself.

Cheney's father was the vice president under President George W. Bush and a Republican leader in the House. "She knows of what she speaks," said Rep. Steny Hoyer of Maryland, the Democratic majority leader.

Unlike a year ago, Trump faces impeachment as a weakened leader, having lost his own reelection as well as the Senate Republican majority.

The president was said to be livid with perceived disloyalty from McConnell and Cheney, as calls mounted for her ouster. He was also deeply frustrated that he could not hit back with his shuttered Twitter account, the fear of which has kept most Republicans in line for years, according to White House officials and Republicans close to the West Wing who weren't authorized to speak publicly about private conversations.

The team around Trump has hollowed out, without any plan for combating the impeachment effort. Trump leaned on Sen. Lindsey Graham of South Carolina to push Republican senators, while chief of staff Mark Meadows called some of his former colleagues on the Hill.

Yet Trump and his allies believed that the president's sturdy popularity with the GOP lawmakers' constituents would prevent most from voting against him. After the riot at the Capitol, most House Republicans did go on that night to vote to overturn the election results.

Trump was expected to watch much of Wednesday's proceedings on TV from the White House residence and his private dining area off the Oval Office.

In the House, Republican leader Kevin McCarthy of California, a top Trump ally, suggested a lighter censure instead, but that option crumbled.

The House tried first to push Vice President Mike Pence and the Cabinet to intervene, passing a resolution Tuesday night calling on them to invoke the 25th Amendment to the Constitution to remove Trump from office.

Pence made it clear he would not do so, saying in a letter to House Speaker Nancy Pelosi, that it was "time to unite our country as we prepare to inaugurate President-elect Joe Biden."

The debate over the resolution was intense after lawmakers returned to the Capitol for the first time since the siege.

Republican Rep. Jim Jordan of Ohio revived Trump's false claims about the election results at the heart of the impeachment charge, drawing sharp rebukes from McGovern and others that "big lies" were fueling the nation's divide.

Rep. Jason Smith, R-Mo., called the swift proceeding a "reckless" impeachment. He said, "This will only bring up the hate and fire more than ever before."

It's far from clear there will be the two-thirds vote in the evenly divided Senate needed to convict and remove Trump. Republican Sen. Pat Toomey of Pennsylvania joined Sen. Lisa Murkowski of Alaska over the weekend in calling for Trump to "go away as soon as possible."

The FBI warned ominously of potentially armed protests by Trump loyalists ahead of Biden's inauguration. Capitol Police urged lawmakers to be on alert. Charges of sedition are being considered for rioters.

New security in place, lawmakers were required to pass through metal detectors to enter the House chamber, not far from where Capitol police, guns drawn, had barricaded the door against the rioters. Some Republican lawmakers complained about the screening.

Biden has said it's important to ensure that the "folks who engaged in sedition and threatening the lives, defacing public property, caused great damage – that they be held accountable."

Fending off concerns that an impeachment trial would bog down his first days in office, the president-elect is encouraging senators to divide their time between taking up his priorities of confirming his nominees and approving COVID-19 relief while also conducting the trial.

The impeachment bill draws from Trump's own false statements about his election defeat to Biden. Judges across the country, including some nominated by Trump, have repeatedly dismissed cases challenging the election results, and former Attorney General William Barr, a Trump ally, has said there was no sign of widespread fraud.

Like the resolution to invoke the 25th Amendment, the impeachment bill also details Trump's pressure on state officials in Georgia to "find" him more votes and his White House rally rant to "fight like hell" by heading to the Capitol.

Trump was impeached in 2019 over his dealings with Ukraine but acquitted by the Senate in 2020.