Trump dons mask for 1st time as coronavirus rages in US 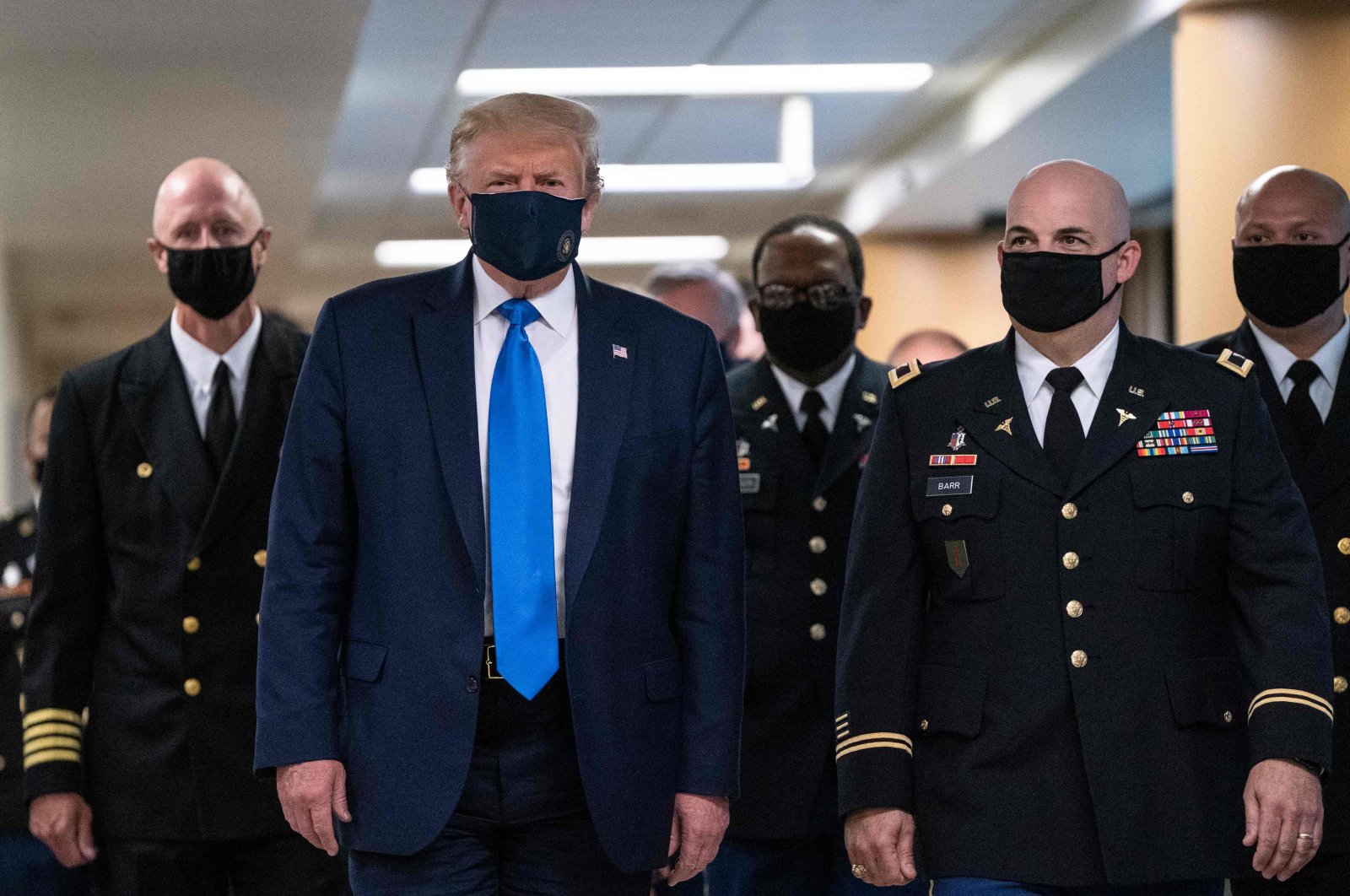 The president finally bowed to public pressure and wore a mask in public for the first time as cases continue skyrocketing around the United States, the country hardest-hit by the pandemic

U.S. President Donald Trump wore a face mask in public for the first time Saturday, finally yielding to intense pressure to set a public health example as the coronavirus rampages across America.

Trump had on a dark mask with the presidential seal as he walked through the corridors of Walter Reed military hospital outside Washington, D.C., to meet wounded veterans.

Trump strode past reporters and did not stop to speak to them about what had become a hotly anticipated moment – would he have a change of heart on a practice recommended by the government's own medical experts?

"I've never been against masks, but I do believe they have a time and a place," Trump said as he left the White House.

News reports this week said aides practically begged the president to relent and wear a mask in public – and let himself be photographed – as coronavirus cases soared in some states and as Trump trailed Democrat Joe Biden badly in polls ahead of the November election.

Trump has steadfastly defended his administration's handling of the pandemic even though the United States is the hardest-hit country in the world.

The country has recently seen several days of more than 60,000 new cases, nearly 135,000 people have died and states have been left to figure out on their own how to reopen without a clear and coherent strategy from the White House.

To wear a mask or not has become a sort of political fulcrum for a deeply divided America.

Conservatives who back Trump often refuse to don one on grounds it impinges on their freedom, while progressives tend to back the practice as a show of collective responsibility at a time of a life-or-death crisis.

The U.S. Centers for Disease Control and Prevention recommend people wear masks in public when they cannot engage in social distancing.

But Trump – at political rallies, media briefings and elsewhere – has repeatedly avoided wearing a mask, even after staffers at the White House tested positive for the virus and as more aides, including Vice President Mike Pence, have taken to wearing them.

In May, Trump even made fun of Biden when the latter started wearing a mask in public, sharing a tweet that featured an unflattering photograph of the former vice president in a black face covering.

The Biden campaign slammed Trump for not wearing a mask earlier.

"Donald Trump spent months ignoring the advice of medical experts and politicizing wearing a mask, one of the most important things we can do to prevent the spread of the virus," Biden spokesman Andrew Bates said in a statement, according to NBC News.

"Rather than taking responsibility and leading, he wasted four months that Americans have been making sacrifices by stoking divisions and actively discouraging people from taking a very basic step to protect each other."

Trump has reportedly told aides that wearing a mask would make him look weak, and he could not stomach the idea of letting the media photograph him in one.

While not wearing one himself, Trump has sent mixed signals about masks, acknowledging that they would be appropriate if worn in an indoor setting where people were close together. But he has accused reporters of wearing them to be politically correct.

Questions remain whether Trump will wear a mask with any regularity.

Even Saturday as he left the White House to head to Walter Reed National Military Medical Center, Trump made it sound like he would wear a mask only because he would be in a hospital – not that he had come around and embraced the idea of donning one regularly.

"I think when you're in a hospital, especially in that particular setting, where you're talking to a lot of soldiers and people that, in some cases, just got off the operating tables, I think it's a great thing to wear a mask," Trump told reporters.

On its website, Walter Reed carries this recommendation: “Whenever you’re out in public, like at your local grocery store or pharmacy, where it’s difficult to maintain 6 feet of social distance, you should wear a cloth face covering.”

The facility also notes that the Centers for Disease Control and Prevention recommends wearing cloth face coverings to slow the spread of the coronavirus.”

The United States, the country hardest hit by the coronavirus, on Saturday posted 66,528 new cases, a record for a 24-hour period, according to a tally from Johns Hopkins University.

Cases also soared in Florida, where Disney World on Saturday reopened two of its four Orlando theme parks, even as the state reported 10,360 new infections and 95 deaths.

Saturday's visitors had reserved their tickets in advance, allowing Disney to control the number of people in the park and accommodate for social distancing.

Visitors were required to undergo temperature checks, and hand sanitizer was widely available.

Disney said it was enforcing social distancing of 6 feet (2 meters) at attractions and inside shops.