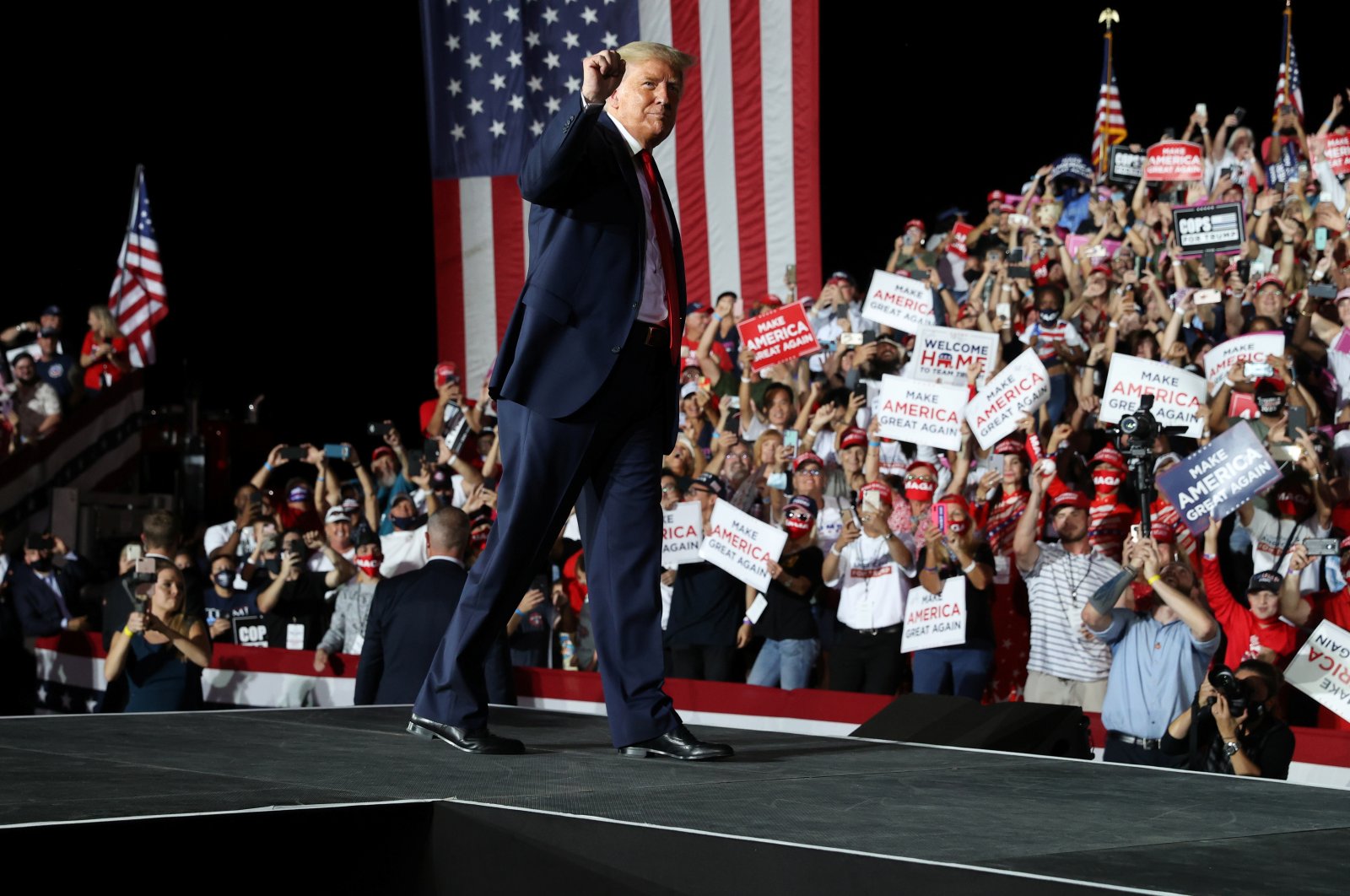 U.S. President Donald Trump departs at the end of a campaign rally, his first since being treated for the coronavirus disease (COVID-19), at Orlando Sanford International Airport in Sanford, Florida, U.S., Oct. 12, 2020. (Reuters Photo)
by French Press Agency - AFP Oct 13, 2020 8:33 am
RECOMMENDED

Deprived of his beloved campaign trail for 10 days by COVID-19, President Donald Trump took center stage again Monday in Florida, vowing that he is in "great shape" with 22 days to go until he faces Joe Biden in the election.

"I went through it and now they say I'm immune," Trump told a cheering crowd in Sanford, near Orlando, few of whom wore masks.

"I feel so powerful. I'll walk in there, I'll kiss everyone in that audience. I'll kiss the guys and the beautiful women, just give you a big fat kiss."

Trump's medical team announced he had tested negative and was no longer contagious as he jetted to Florida – the first of four battleground states he plans to visit over the next four days. His claim of immunity is unproven.

Trailing his Democratic challenger by double digits in the polls, Trump is seeking to rally his base on a blitz of key swing states.

In rare form just a week after his release from the hospital, Trump's hourlong speech called on all of his campaign classics: vicious attacks against "Crooked Hillary" Clinton and the "corrupt" press, alarmist warnings against the "radical left" and the "socialist nightmare."

Trump also mocked his opponent, whom he has nicknamed "Sleepy Joe," saying that "practically nobody showed up" to Biden's campaign event.

Unlike Trump, Biden has been following public health guidelines during the pandemic, hosting socially-distanced campaign events that sharply contrast with Trump's packed, largely maskless extravaganzas – including a recent celebration at the White House described by experts as a "superspreader."

"Oh, do I like Florida," Trump told the crowd. The state could play a crucial role on Nov. 3.

The president brushed aside poll numbers, saying: "Four years ago we had the same thing. We are going to lose Florida, they said four years ago."

The Republican-controlled Senate will begin hearings for the 48-year-old judge, whose confirmation – over which there is little doubt – will shift the nation's highest court firmly to the right, possibly for generations.

"Who would have thought we're on number three, you know?" he asked, referring to the justices he has appointed to the court since taking office.

Before Trump, 74, left for Florida, his physician Sean Conley said the president was now negative and no longer "infectious to others" – following consecutive rapid tests and taking into account a number of other health metrics.

Patients are normally classed as negative only after taking the more sensitive PCR test – drawing suspicion from experts on social media that Trump's doctors had administered these but had not received the results they were looking for.

Biden, meanwhile, attacked the president ahead of the rally for playing down the threat of the virus early in the pandemic.

"Trump knew how dangerous the disease was but did nothing," Biden said ahead of the rally. "Why didn't he tell us? Why didn't he warn us?"

"His reckless personal conduct since his diagnosis has been unconscionable," Biden added. "The longer Donald Trump is president, the more reckless he seems to get."

Biden specifically attacked Trump's planned Florida visit, saying he was bringing nothing but "divisive rhetoric, and fearmongering" to the Sunshine State.

"But, equally dangerous is what he fails to bring: no plan to get this virus that has taken the lives of over 15,000 Floridians under control," Biden said.

The president is to host a second rally Tuesday night in Johnstown, Pennsylvania, followed by visits to Iowa and North Carolina this week as part of a push to make up ground on Biden, who has a double-digit lead in the national polls according to the RealClearPolitics website.

Trump won Florida, Pennsylvania, Iowa and North Carolina – the four states he is visiting this week – in 2016 against Hillary Clinton but is trailing Biden in all four this time around, according to a RealClearPolitics average of state polls.

Biden has razor-thin leads in Iowa and North Carolina, according to RealClearPolitics, but is leading by more substantial margins in Florida and Pennsylvania – 3.7 points and 7.1 points, respectively.

More than 10 million Americans have already cast their ballots in the U.S. presidential contest, a tracking group said, a record pace three weeks before election day.