Trump issues emergency declaration in Washington ahead of Inauguration Day 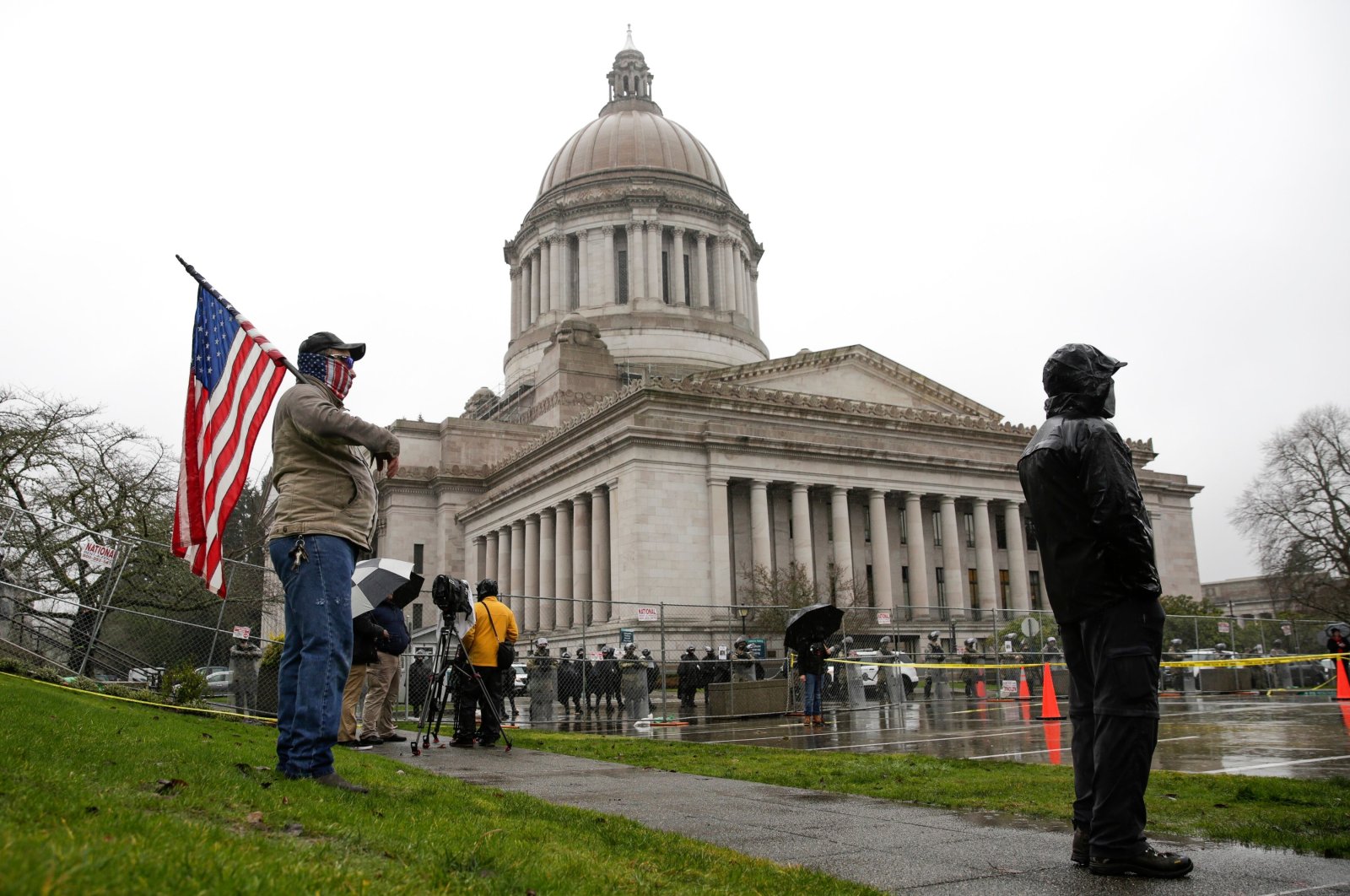 A demonstrator, who wished to remain anonymous, holds an American flag as the Washington National Guard, State Patrol and a fence surround the state Capitol as the Legislature opens the 2021 session in Olympia, Washington, Jan. 11, 2021. (AFP Photo)
by DAILY SABAH WITH AGENCIES Jan 12, 2021 1:17 pm
RECOMMENDED

U.S. President Donald Trump on Monday approved an emergency declaration for the nation's capital amid growing concern among local and federal authorities about violence in the lead up to and during President-elect Joe Biden's inauguration on Jan. 20.

The declaration allows the Department of Homeland Security and the Federal Emergency Management Agency (FEMA) to coordinate with local authorities as needed. Trump's emergency declaration is in effect from Monday through Jan. 24.

The declaration from Trump comes five days after his supporters stormed the Capitol as Congress began formally counting the Electoral College votes to certify his defeat to Biden. During the raid, five people died, including a Capitol Police officer. Dozens of people have been charged for the violence and hundreds of more cases are expected.

The FBI has warned of armed protests being planned for Washington and all 50 U.S. state capitals in the run-up to Biden's inauguration, a federal law enforcement source said Monday.

An internal FBI bulletin warned, as of Sunday, that the nationwide protests may start later this week and extend through Inauguration Day, according to two law enforcement officials who read details of the memo to The Associated Press (AP). Investigators believe some of the people are members of extremist groups, the officials said.

"Armed protests are being planned at all 50 state capitols from Jan. 16 through at least Jan. 20, and at the U.S. Capitol from Jan. 17 through Jan. 20," the bulletin said, according to one official.

The FBI issued at least one other bulletin – they go out to law enforcement nationwide on the topic – before the riots last week. On Dec. 29, it warned of the potential for armed demonstrators targeting legislatures, the second official said.

"While our standard practice is to not comment on specific intelligence products, the FBI is supporting our state, local and federal law enforcement partners with maintaining public safety in the communities we serve," the bureau said in a statement. "Our efforts are focused on identifying, investigating and disrupting individuals that are inciting violence and engaging in criminal activity."

The FBI said it wasn't focused on peaceful protests but "on those threatening their safety and the safety of other citizens with violence and destruction of property."

Meanwhile, Biden told reporters in Newark, Delaware, he is "not afraid of taking the oath outside," referring to the traditional setting for the swearing-in ceremony on the Capitol grounds. But he said it was critically important that people "who engaged in sedition and threatened people's lives, defaced public property, caused great damage" be held accountable, according to a Reuters report.

Biden's inaugural committee said on Monday the theme of the Jan. 20 ceremony would be "America United." Trump, who is facing the threat of impeachment, said last week he would not attend the ceremony, a decision the president-elect supported.

Democrats in the U.S. House of Representatives plan to impeach Trump on Wednesday unless he steps down or is removed before then. House Majority Leader Steny Hoyer told his fellow Democrats the chamber would take up impeachment on Wednesday if Vice President Mike Pence does not invoke the U.S. Constitution's 25th Amendment to remove Trump from office, a House aide said. Passage would make the Republican the only U.S. president ever to be impeached twice.

An impeachment would prompt the Senate to hold a trial to decide whether to convict and remove him from office, although it is unlikely the proceeding would be completed before Trump's term expires in nine days. A Senate conviction could also lead to Trump being barred from holding public office again, ending his potential 2024 presidential bid before it begins.