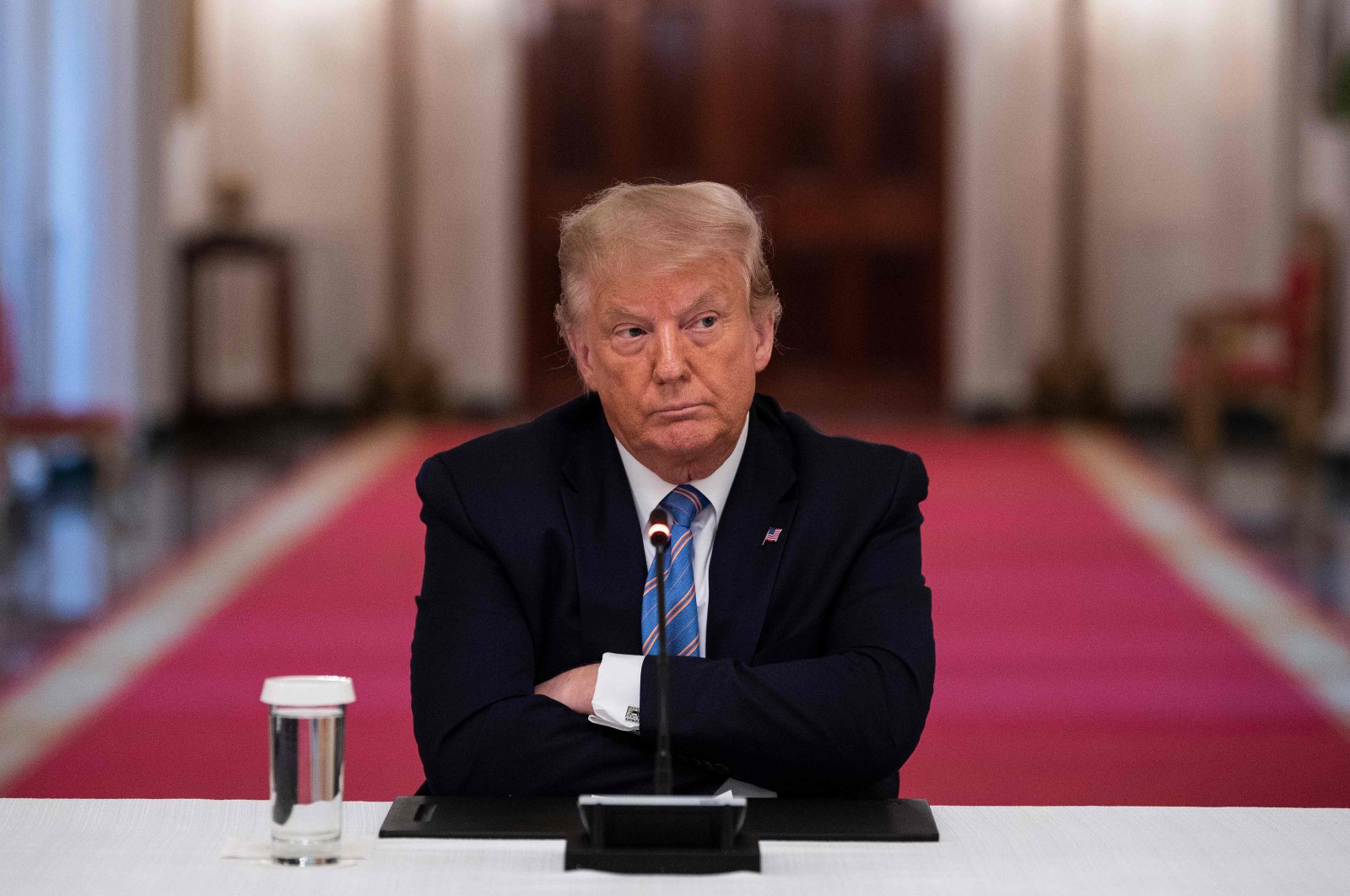 U.S. President Donald Trump sits with his arms crossed during a roundtable discussion on the Safe Reopening of America’s Schools during the coronavirus pandemic, in the East Room of the White House in Washington, D.C. on July 7, 2020. (AFP Photo)
by ASSOCIATED PRESS Jul 08, 2020 12:34 pm
RECOMMENDED

President Donald Trump launched an all-out effort pressing state and local officials to reopen schools this fall, arguing that some are keeping schools closed not because of the risks from the coronavirus pandemic but for political reasons.

“They think it’s going to be good for them politically, so they keep the schools closed,” Trump said Tuesday at a White House discussion on school plans for the fall. “No way. We’re very much going to put pressure on governors and everybody else to open the schools.”

The White House’s round-table gathered health and education leaders from across the nation who said schools and colleges are ready to open this fall and can do so safely. They argued that the risks of keeping students at home outweigh any risks tied to the coronavirus, saying students need access to meal programs and mental and behavioral health services.

But that bright outlook was met with skepticism by some beyond the White House. The president of the nation’s largest education union said Trump is more interested in scoring points for the November election than in keeping students safe.

“Trump has proven to be incapable of grasping that people are dying — that more than 130,000 Americans have already died,” said Lily Eskelsen García, president of the National Education Association. “Educators want nothing more than to be back in classrooms and on college campuses with our students, but we must do it in a way that keeps students, educators and communities safe.”

At the White House event, Trump repeated his claim that Democrats want to keep schools closed for political reasons and not health reasons. He made the same claim on Twitter a day before, saying: “They think it will help them in November. Wrong, the people get it!”

Trump offered no evidence for the allegation, which has been criticized by health experts who say politicizing the issue will make it harder to work toward reopening schools. Jennifer Nuzzo, of Johns Hopkins University’s COVID-19 Testing Insights Initiative, said she was “deeply troubled” by the claim.

“When you make it about politics and just people trying to score points and get elected, I mean, I really think it’s a disservice to how incredibly important this issue is,” Nuzzo said in an interview. “And it really distracts from what I think we need, which is real solutions and a plan in order to make this happen.”

Whether schools and colleges should open this fall and how has been a topic of growing debate as the coronavirus continues to surge in parts of the United States. Trump applauded Florida Gov. Ron DeSantis for his state’s recent order to open public schools this fall. And Trump attacked Harvard University for its decision to hold instruction online for the fall term.

“I think it’s ridiculous, I think it’s an easy way out and I think they ought to be ashamed of themselves, if you want to know the truth,” Trump said Tuesday.

"All course instruction (undergraduate and graduate) for the 2020-21 academic year will be delivered online," officials from Harvard University said in a Monday statement. "Students will learn remotely, whether or not they live on campus."

The Centers for Disease Control and Prevention have sent mixed signals on the issue, saying students should return to the classroom but also noting that virtual classes present the lowest risk of COVID-19 spread. Speaking at Trump’s event, however, the agency’s director said unequivocally that it’s better for students to be in school than at home.

Dr. Robert Redfield noted that COVID-19 cases tend to be mild in young people, adding that the greatest risk is transmission from children to more vulnerable populations. He said the CDC encourages all schools to reopen with customized plans to minimize the spread of the coronavirus while giving students access to school services.

“It’s clear that the greater risk to our society is to have these schools close,” Redfield said. “Nothing would cause me greater sadness than to see any school district or school use our guidance as a reason not to reopen.”

The CDC’s guidance for schools recommends that students and teachers wear masks “as feasible,” spread out desks, stagger schedules, eat meals in classrooms instead of the cafeteria and add physical barriers between bathroom sinks.

Some schools have announced plans to bring students back for only a few days a week, an option that Education Secretary Betsy DeVos on Tuesday said was unacceptable.

“It’s clear that our nations schools must fully reopen and fully operate this school year. Anything short of that robs students, not to mention taxpayers, of their future,” DeVos said.

During a call with governors, DeVos slammed plans by Virginia’s Fairfax County Public Schools to have families decide between fully remote instruction or two days a week at school. “A choice of two days per week in the classroom is not a choice at all,” DeVos said, according to audio of the call obtained by The Associated Press.

DeVos also criticized many schools’ attempts at distance education after the pandemic prompted them to move classes online last spring. She said she was disappointed in schools that “didn’t figure out how to serve students or who just gave up and didn’t try.”

The same thing can’t happen again this fall, she said, urging governors to play a role in getting schools to reopen.

Among those joining Trump on Tuesday was the president of the American Academy of Pediatrics, which recently issued guidelines suggesting that schools aim to start the academic year “physically present in school.” Keeping students at home can lead to social isolation, the organization said, and prevent schools from identifying learning deficits, abuse, depression and other issues.

Students’ mental and emotional health – along with their parents’ – was repeatedly raised in the argument to reopen schools.

“Children’s mental health and social development must be as much of a priority as physical health,” first lady Melania Trump said at the round-table. “The same is true for parents. Many will be forced to make stressful choices between caring for their children and going back to work.”

But some are calling for greater caution. Arne Duncan, who served as education secretary under former President Barack Obama, has said the focus should be on making sure students can return safely.

“We all want children to go back to school,” Duncan said on Twitter. “The question is whether we care enough about our children to ALLOW them to go to school safely. Our behavior, our commitment to shared sacrifice – or our selfishness – will determine what happens this fall for kids.”