Trump leaves White House for final time as US president 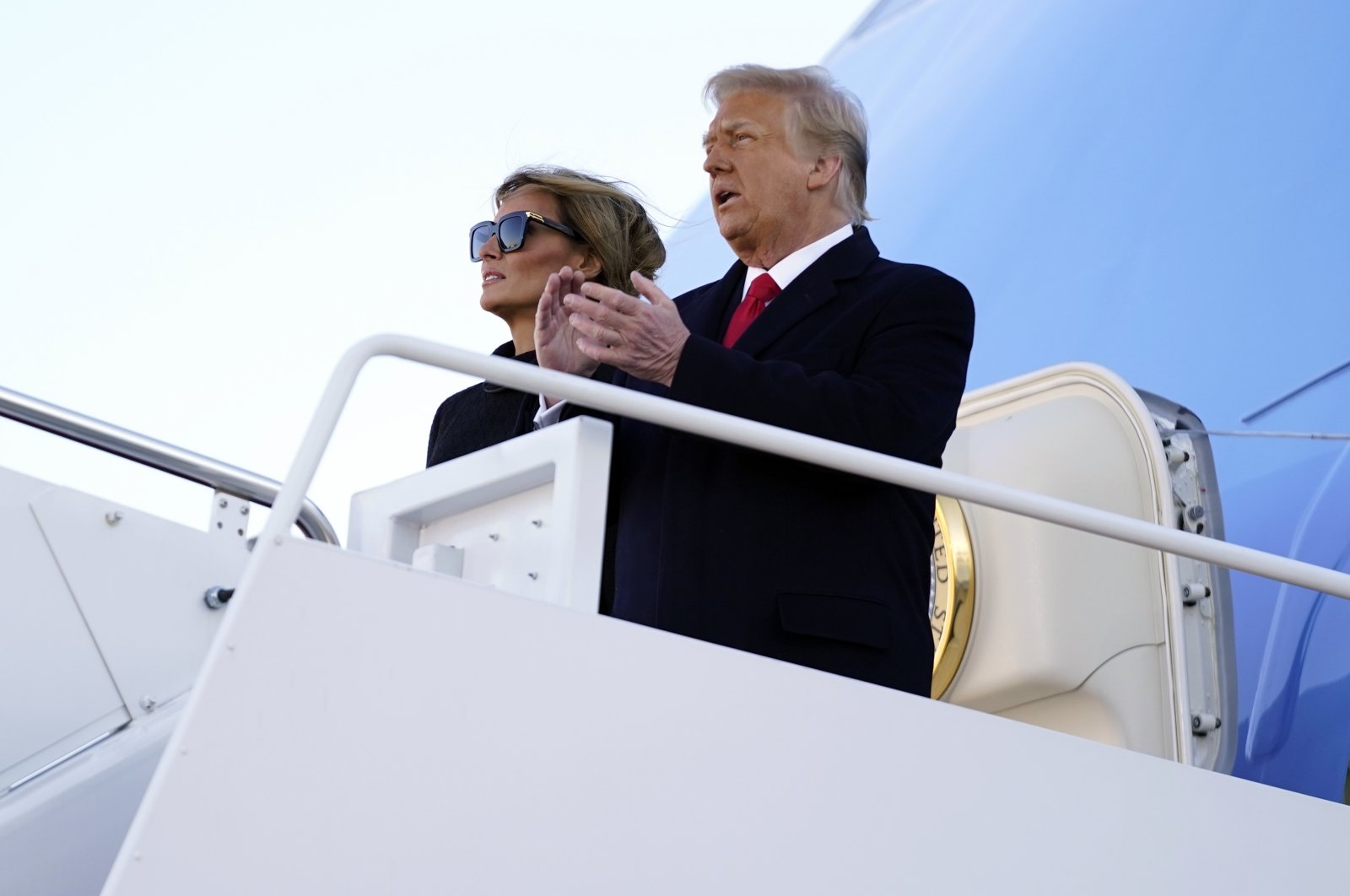 U.S. President Donald Trump leaves the White House for the last time as president, avoiding Joe Biden's inauguration and leaving behind a legacy of chaos and tumult

After months of power struggle, an unsuccessful presidential campaign, a loss in his reelection bid and lobbying behind the scenes, U.S. President Donald Trump has found himself on the doorstep of the White House. For one last time as president, he walked out of the White House and boarded Marine One Wednesday morning, leaving behind a legacy of chaos and tumult and a nation bitterly divided.

"It’s been a great honor, the honor of a lifetime," he said before heading to Joint Base Andrews in suburban Maryland, where he’ll have a military sendoff. A red carpet has been placed on the tarmac for Trump to walk on as he boards the plane. Four U.S. Army cannons are set up for a 21-gun salute. Trump then flies to Florida, where he’ll stay at Mar-a-Lago.

He made brief farewell remarks at Maryland’s Joint Base Andrews before he boarded Air Force One for a flight to his Florida home. Trump did not mention President-elect Joe Biden by name during his Wednesday remarks. Trump told cheering, chanting supporters he’ll be watching and listening from a distance. He promised he will be back "in some form” and wished the crowd a "good life” before he and his wife boarded the plane.

Four years after standing on the stage at his inauguration and painting a dire picture of “American carnage,” Trump departs the office twice impeached, with millions more out of work and 400,000 dead from the coronavirus. Republicans under his watch lost the presidency and both chambers of Congress. He will be forever remembered for the final major act of his presidency: inciting an insurrection at the Capitol that left five dead, including a Capitol Police officer, and horrified the nation.

Trump left Washington just hours before Biden takes the oath of office as the 46th president of the United States. He is the first president in modern history to boycott his successor’s inauguration as he continues to stew about his loss and privately maintains that the election that Biden fairly won was stolen from him. Republican officials in several critical states, members of his own administration and a wide swath of judges, including those appointed by Trump, have rejected those arguments.

Guests have been invited, but it is unclear how many will attend. Even Vice President Mike Pence plans to skip the event, citing the logistical challenges of getting from the air base to the inauguration ceremonies. Washington has been transformed into a security fortress, with thousands of National Guard troops, fencing and checkpoints to try to stave off further violence.

Aides had urged Trump to spend his final days in office trying to salvage his legacy by highlighting his administration’s achievements — passing tax cuts, scaling back federal regulations and normalizing relations in the Middle East. But Trump largely refused, taking a single trip to the Texas border and releasing a video in which he pledged to his supporters that “the movement we started is only just beginning.”

Trump will retire to Florida with a small group of former White House aides as he charts a political future that looks very different now than just two weeks ago.

Before the Capitol riot, Trump had been expected to remain his party’s de facto leader, wielding enormous power as he served as a kingmaker and mulled a 2024 presidential run. But now he appears more powerless than ever — shunned by so many in his party, impeached twice, denied the Twitter bullhorn he had intended to use as his weapon and even facing the prospect that, if he is convicted in his Senate trial, he could be barred from seeking a second term.

For now, Trump remains angry and embarrassed, consumed with rage and grievance. He spent the week after the election sinking deeper and deeper into a world of conspiracy, and those who have spoken with him say he continues to believe he won in November. He continues to lash out at Republicans for perceived disloyalty and has threatened, both publicly and privately, to spend the coming years backing primary challenges against those he feel betrayed him.

Some expect him to eventually turn completely on the Republican Party, perhaps by flirting with a run as a third-party candidate as an act of revenge.

For all the chaos and drama and bending the world to his will, Trump ended his term as he began it: largely alone. The Republican Party he co-opted finally appeared to have had enough after Trump’s supporters violently stormed the Capitol, hunting for lawmakers who refused to go along with Trump’s unconstitutional efforts to overturn the results of a democratic election.

Earlier Wednesday he pardoned former chief strategist Steve Bannon as part of a flurry of clemency action in the final hours of his White House term that benefited more than 140 people, including rap performers, ex-members of Congress and other allies of him and his family.

The last-minute clemency, announced Wednesday morning, follows separate waves of pardons over the last month for Trump associates convicted in the FBI’s Russia investigation as well as for the father of his son-in-law. Taken together, the actions underscore the president’s willingness, all the way through his four years in the White House, to flex his constitutional powers in ways that defy convention and explicitly aid his friends and supporters.

Whereas pardon recipients are conventionally thought of as defendants who have faced justice, often by having served at least some prison time, the pardon for Bannon nullifies a prosecution that was still in its early stages and likely months away from trial in Manhattan, effectively eliminating any prospect for punishment.

Though other presidents have issued controversial pardons at the ends of their administration, perhaps no commander in chief has so enjoyed using the clemency authority to benefit not only friends and acquaintances but also celebrity defendants and those championed by allies.

Besides Bannon, other Trump family allies to get pardons were Elliott Broidy, a Republican fundraiser who pleaded guilty last fall in a scheme to lobby the White House to drop an investigation into the looting of a Malaysian wealth fund, and Ken Kurson, a friend of Trump son-in-law Jared Kushner who was charged last October with cyberstalking during a heated divorce.

"Steve Bannon is getting a pardon from Trump after defrauding Trump’s own supporters into paying for a wall that Trump promised Mexico would pay for,” Democratic Rep. Adam Schiff said on Twitter. "And if that all sounds crazy, that’s because it is. Thank God we have only 12 more hours of this den of thieves.”

Bannon has been charged with duping thousands of investors who believed their money would be used to fulfill Trump’s chief campaign promise to build a wall along the southern border. Instead, he allegedly diverted over $1 million, paying a salary to one campaign official and personal expenses for himself.

Trump has already pardoned a slew of longtime associates and supporters, including his former campaign chairperson, Paul Manafort; Charles Kushner, the father of his son-in-law; his longtime friend and adviser Roger Stone; and his former national security adviser Michael Flynn.

A voice of nationalist, outsider conservatism, Bannon – who served in the Navy and worked at Goldman Sachs and as a Hollywood producer before turning to politics – led the conservative Breitbart News before being tapped to serve as chief executive officer of Trump’s 2016 campaign in its critical final months. He later served as chief strategist to the president during the turbulent early days of Trump’s administration and was at the forefront of many of its most contentious policies, including its travel ban on several majority-Muslim countries.

But Bannon, who clashed with other top advisers, was pushed out after less than a year. And his split with Trump deepened after he was quoted in a 2018 book making critical remarks about some of Trump’s adult children. Bannon apologized and soon stepped down as chairperson of Breitbart. He and Trump have recently reconciled.

In August, he was pulled from a luxury yacht off the coast of Connecticut and brought before a judge in Manhattan, where he pleaded not guilty. When he emerged from the courthouse, Bannon tore off his mask, smiled and waved to news cameras. As he went to a waiting vehicle, he shouted, "This entire fiasco is to stop people who want to build the wall.”

The organizers of the "We Build The Wall” group portrayed themselves as eager to help the president build a "big beautiful” barrier along the U.S.-Mexico border, as he promised during the 2016 campaign. They raised more than $25 million from thousands of donors and pledged that 100% of the money would be used for the project.

But according to the criminal charges, much of the money never made it to the wall. Instead, it was used to line the pockets of group members, including Bannon.