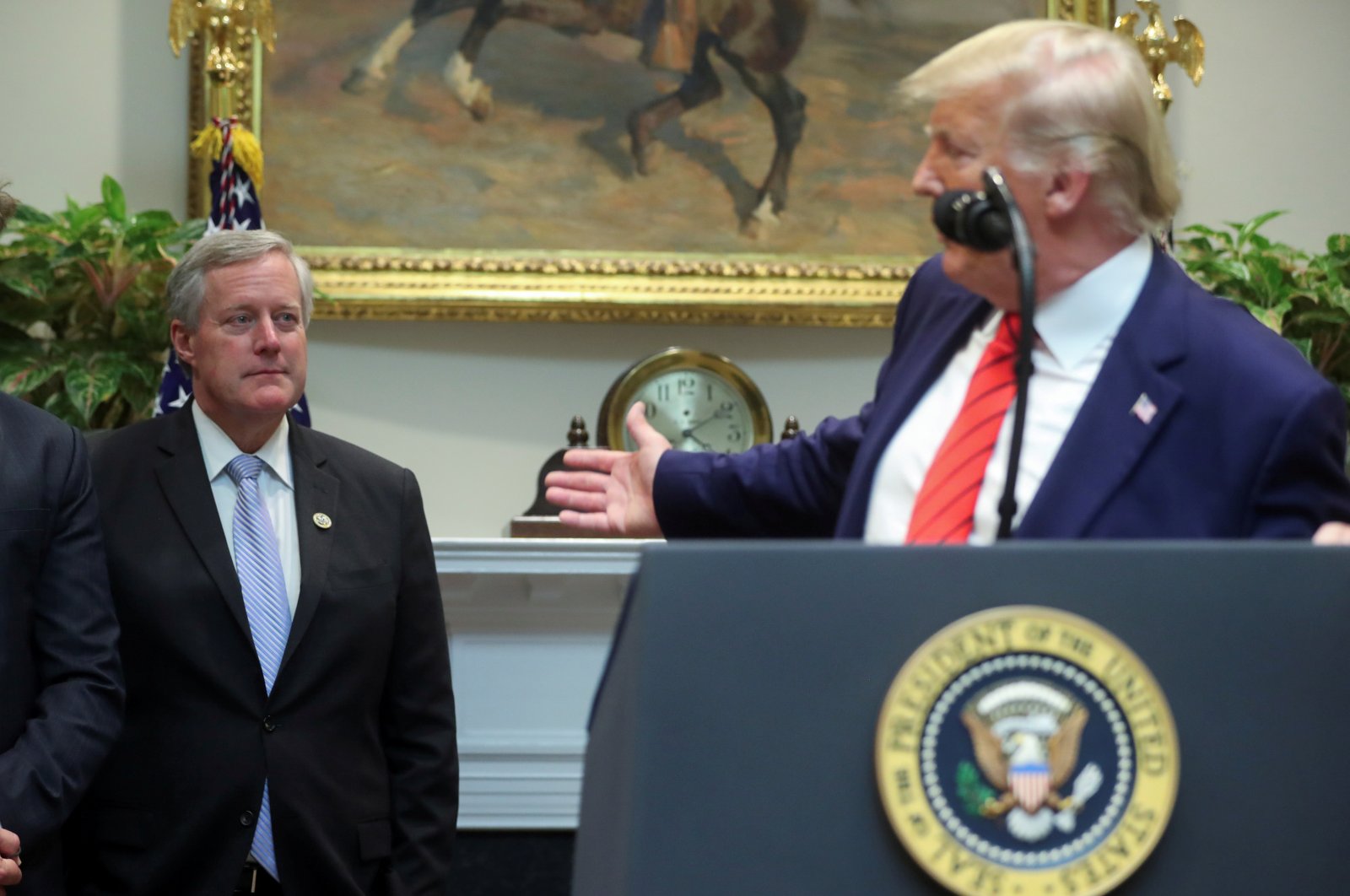 In the midst of one of the most daunting crises of his administration, President Donald Trump announced a major staff overhaul, replacing his acting chief of staff Mick Mulvaney with Republican Rep. Mark Meadows – making him the fourth chief of staff in four years.

With much of the country focused on the spreading coronavirus, Trump announced the surprise reshuffle in a Friday night tweet, saying Mulvaney would become the U.S. special envoy for Northern Ireland.

"I have long known and worked with Mark, and the relationship is a very good one,” he wrote, thanking Mulvaney – who never shook his "acting” title – "for having served the Administration so well.”

The long-rumored move comes as Trump has been pulling together a team of loyalists and allies ahead of what is expected to be a bitter reelection fight. But the timing – as his administration was already facing criticism over its handling of the outbreak – has threatened to exacerbate concerns about the government's ability to protect the nation from a virus that has now infected more than 100,000 people worldwide.

Mulvaney had been leading the administration's interagency response to the virus until Trump designated Vice President Mike Pence to lead the whole-of-government effort more than a week ago.

It was just one of a long series of downgrades for Mulvaney, whose relationship with Trump began to sour not long after he was named to the position in Dec. 2018. Indeed, Trump had been eyeing the change for many months, according to people familiar with his thinking, but wanted to wait until after the impeachment saga was over to make his move.

Meadows, the onetime leader of the House Freedom Caucus, is a longtime Trump confidant and sounding board, whose political instincts Trump respects. He announced last year that he would not be seeking reelection for his North Carolina House seat, saying that he expected to join Trump's team in a certain capacity, though it was not clear in what role.

He was officially offered the job Thursday, according to one of the people familiar with the matter, who, like others, spoke on condition of anonymity because they were not authorized to discuss the changes publicly. Mulvaney was informed Friday.

A number of outside advisers had cautioned Trump that making such a high-profile switch during the coronavirus crisis would rattle markets craving stability and his decision to make the announcement after Wall Street had closed Friday was apparently partly informed by those concerns.

First elected in the post-Tea Party wave of 2012, Meadows quickly established himself as a leader of a new generation of conservative Republicans on Capitol Hill. He served as chairman of the unyielding Freedom Caucus, and his antics in the House helped spur Speaker John Boehner’s sudden retirement.

As Trump ascended to the presidency in 2016, Meadows switched from his earlier backing of Texas Sen. Ted Cruz and – urged on by his wife – joined the Trump train. Since then, he has proven himself an unwavering Trump ally.

A skilled negotiator, Meadows is seen as both a leader and an outlier among Republicans on Capitol Hill. Meadows was central to talks on the failed effort to repeal Obamacare and pass the GOP tax cuts. But in many ways, he remains his own counsel, with a skill set and status that may serve him well in Trump's White House.

Meadows has also made clear to the White House and those close to the president that he has no plans to try to rein in Trump, as others – like Mulvaney's predecessor, retired four-star Gen. John Kelly - have tried and failed to do.

Having seen how Kelly’s efforts to impose military order had grated on Trump and antagonized outside allies, Mulvaney, a former congressman from South Carolina, took a laissez-faire approach, making clear he believed his job was merely to manage the staff and not the president.

He adopted the "Let Trump be Trump” mantra that had served others in Trump’s orbit well and focused instead on trying to boost staff morale and wooing lawmakers at the Camp David presidential retreat. But while he never irritated Trump and outside allies, Mulvaney had been relegated to the sidelines even before a disastrous mid-October press conference in which he insisted quid pro quo was normal when it came to foreign policy, undercutting the president’s position that there was no such thing in his dealings with Ukraine.

Still, his allies had repeatedly brushed off rumblings of his imminent departure and had said as recently as last month that he planned to stay at least through the election in November.

Trump had other plans. Ever since his acquittal on the impeachment charges, Trump has embarked on a mission to rid his administration of those he deems insufficiently loyal and has been assembling a team of trusted confidants in preparation for a tough reelection fight.

Still, one person close to Mulvaney insisted he was pleased with the decision to bring in Meadows, noting the two were friends and had served together on the Freedom Caucus. Indeed, they said Mulvaney had raised the idea of Meadows as chief of staff before Trump had tapped Mulaney for the job, and said he discussed the plan with Trump following his trip to India last week.