Trump points finger at China's Xi over propaganda attack on US 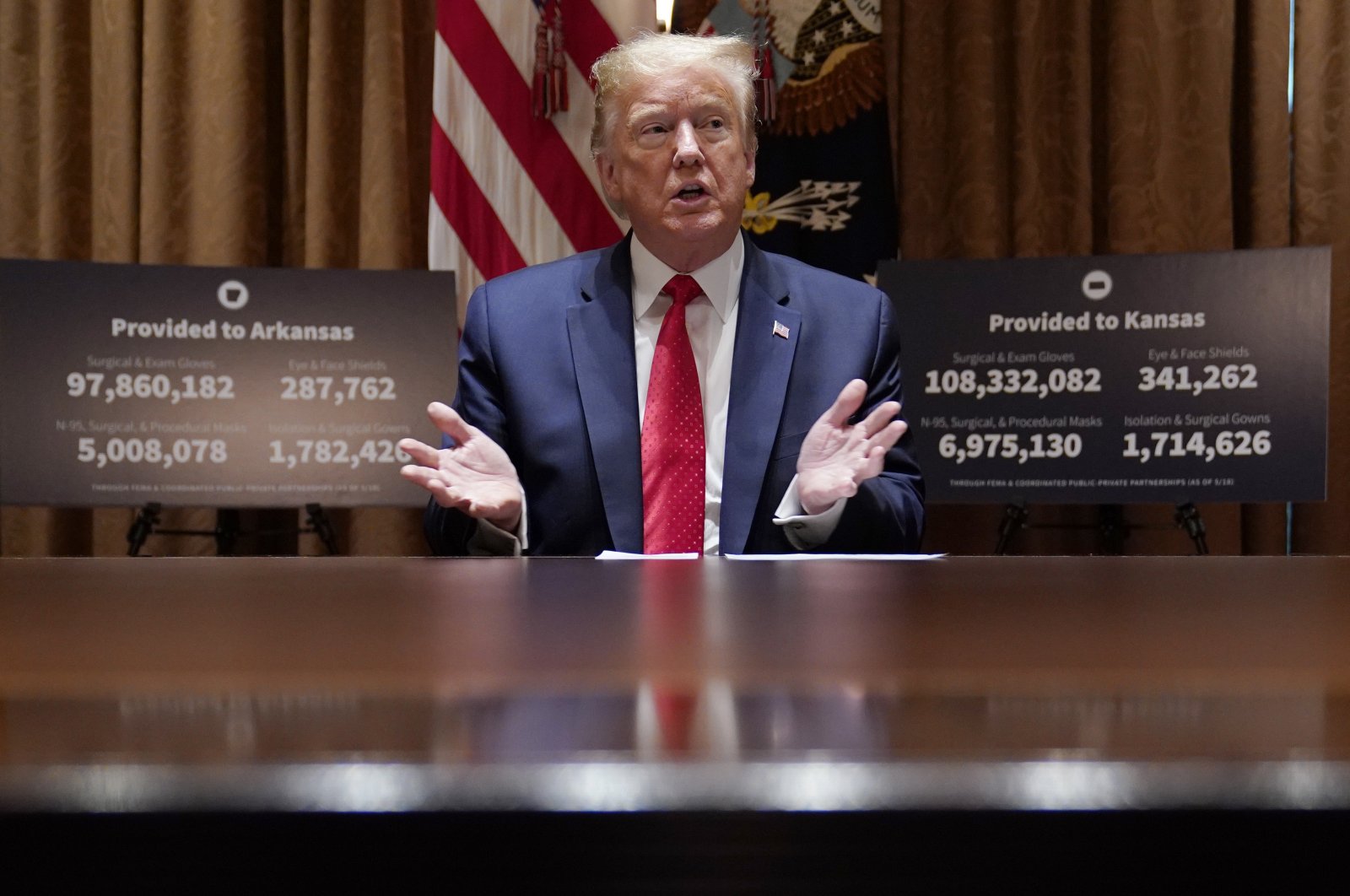 U.S. President Donald Trump speaks during a meeting with Arkansas Gov. Asa Hutchinson and Kansas Gov. Laura Kelly in the Cabinet Room of the White House, Wednesday, May 20, 2020, in Washington. (AP Photo)
by Agencies
May 21, 2020 9:26 am

U.S. President Donald Trump said Wednesday that a Chinese disinformation and propaganda attack on his country and Europe was a disgrace.

"(China's Foreign Ministry) Spokesman (Zhao Lijian) speaks stupidly on behalf of China, trying desperately to deflect the pain and carnage that their country spread throughout the world. Its disinformation and propaganda attack on the United States and Europe is a disgrace," Trump said on Twitter.

"China is on a massive disinformation campaign because they are desperate to have Sleepy Joe Biden win the presidential race so they can continue to rip-off the United States, as they have done for decades, until I came along!" he added.

Earlier, Lijian said on Twitter that the "U.S. non-stop disinformation may confuse and mislead some for a while."

Meanwhile, the White House on Wednesday issued a broad-scale attack on Beijing's predatory economic policies, military buildup, disinformation campaigns and human rights violations in addition to its hard-hitting rhetoric against China over its handling of the coronavirus.

The 20-page report does not signal a shift in U.S. policy, according to a senior administration official, who was not authorized to publicly discuss the report and spoke only on condition of anonymity, but it expands on Trump's get-tough rhetoric that he hopes will resonate with voters angry about China's handling of the disease outbreak that has left tens of millions of Americans out of work.

“The media’s focus on the current pandemic risks missing the bigger picture of the challenge that’s presented by the Chinese Communist Party,” Secretary of State Mike Pompeo said Wednesday before the White House released its report.

“China’s been ruled by a brutal, authoritarian regime, a communist regime since 1949. For several decades, we thought the regime would become more like us — through trade, scientific exchanges, diplomatic outreach, letting them in the World Trade Organization as a developing nation. That didn’t happen,” he said. “We greatly underestimated the degree to which Beijing is ideologically and politically hostile to free nations. The whole world is waking up to that fact.”

Later in the day, the State Department announced that it had approved the sale of advanced torpedoes to the Taiwanese military, a move sure to draw a rebuke from Beijing, which regards the island as a renegade province. The department said it had informed Congress of the $180 million sale of heavy-weight torpedoes, spare parts, support and testing equipment, which “will help improve the security of (Taiwan) and assist in maintaining political stability, military balance, and economic progress in the region.”

While pushing back on China, Trump has sometimes uttered contradictory statements. He has talked about having a great personal relationship with Chinese President Xi Jinping, yet has repeatedly denounced China for not doing more to stop the virus from spreading across the world. He'll criticize China, then say he wants Beijing to sign Phase II of a trade deal and join the United States and Russia in a three-way nuclear arms control treaty.

In the past 20 years, the U.S. believed that if it opened its markets wider, invested more money in China, and provided greater access to top U.S. technology and training for Chinese military officers that somehow this would cause China to liberalize, the official said.

Instead, China is more authoritarian than at any time since Beijing killed anti-government protesters on Tiananmen Square in 1989, and the Chinese Communist Party is increasingly asserting its political ideas across the globe.

The U.S. and China established diplomatic relations during the Nixon administration.

“More than 40 years later, it has become evident that this approach underestimated the will of the Chinese Communist Party to constrain the scope of economic and political reform in China,” the report said. “Over the past two decades, reforms have slowed, stalled, or reversed.”

According to the report, the Trump administration sees “no value” in engaging with Beijing for symbolism and pageantry. “When quiet diplomacy proves futile, the United States will increase public pressure” on China.

The latest example of U.S. and China power competition is playing out at the World Health Organization. At the U.N. health agency’s annual assembly this week, Xi joined by video conference to offer more money and support. Meanwhile, Trump railed against the WHO in a letter accusing it of covering up the coronavirus outbreak with China — and threatening to permanently halt U.S. funding that has been its main financial lifeblood for years.

China also has been engaged in a military buildup, has engaged in cyber hacking and Beijing’s pledge to end predatory economic practices “is littered with broken and empty promises.”

China promised during the Obama administration that it would stop government-directed cyber theft of trade secrets for commercial gain and restated the same promise in the first two years of the Trump administration, the report said. In late 2018, however, the U.S. and a dozen other countries reported that China was hacking computers to target intellectual property and steal business information.

“Since the 1980s, Beijing has signed multiple international agreements to protect intellectual property. Despite this, more than 63 percent of the world’s counterfeits originate in China, inflicting hundreds of billions of dollars of damage on legitimate businesses around the world,” the report said.

The Trump administration also is upset at how China continues to argue to the World Trade Organization that it is a “developing country,” even though it is the top importer of high-tech products and ranks second only to the U.S. in terms of gross domestic product, defense spending and outward investment.

Under the Xi government, Chinese officials have purged political opposition; bloggers, activists and lawyers have been unjustly prosecuted; stringent controls have been imposed to censor not only media, but universities, businesses and non-governmental organizations; citizens and corporations have been targeted with surveillance; and people perceived as dissidents have been subjected to arbitrary detention, torture and abuse.

China retains its non-market economic structure and state-led approach to trade and investment, the report said. Political reforms have likewise atrophied or reversed and distinctions between the government and the Chinese Chinese Party are eroding.

Chinese authorities also have detained more than 1 million Uighurs and members of other ethnic and religious minority groups in indoctrination camps where many endure forced labor, ideological indoctrination and physical and psychological abuse.