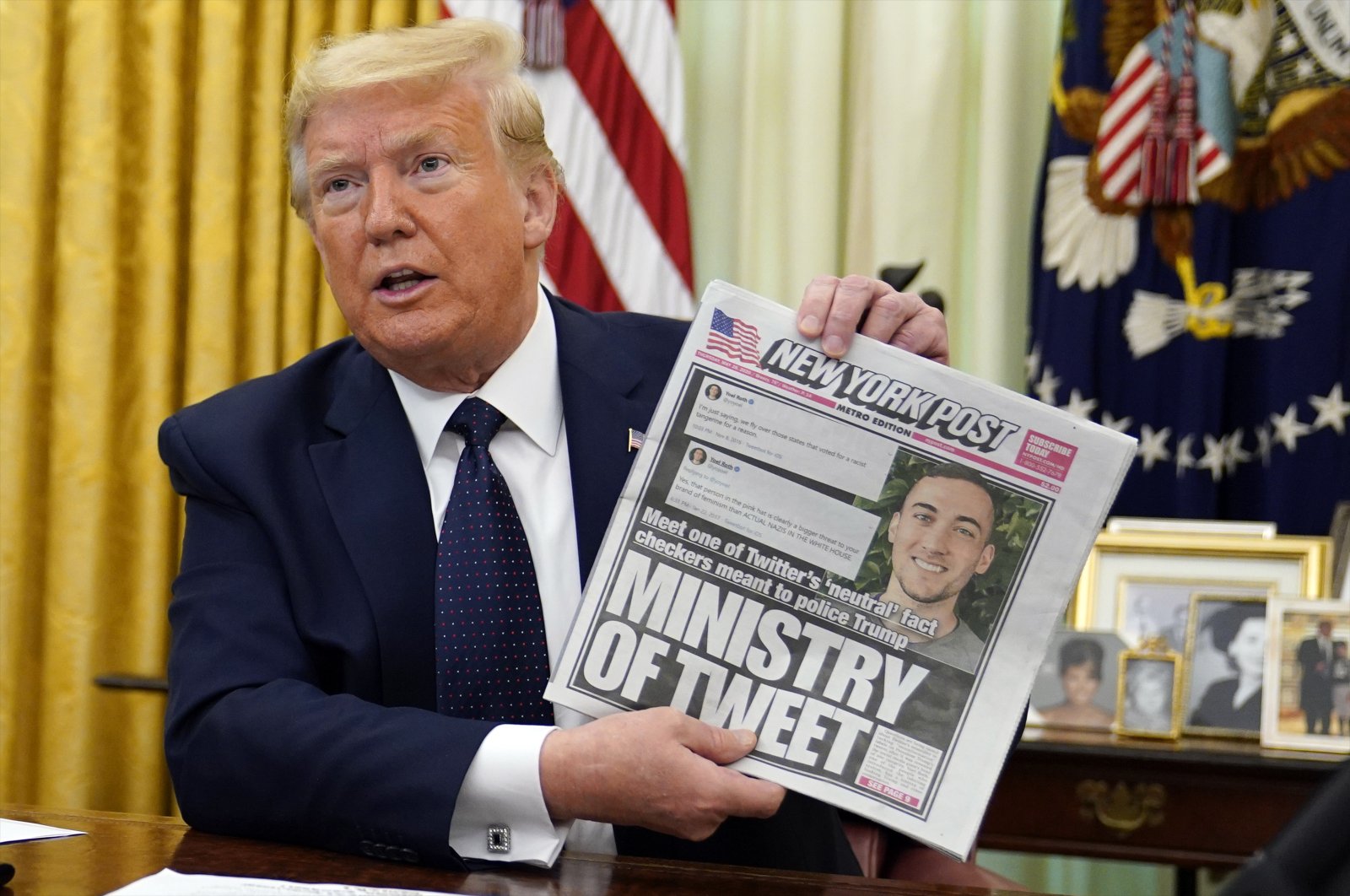 President Donald Trump holds up a copy of the New York Post as speaks before signing an executive order aimed at curbing protections for social media giants, in the Oval Office of the White House, Thursday, May 28, 2020, in Washington. (AP Photo)
by ASSOCIATED PRESS
May 28, 2020 11:59 pm

President Donald Trump escalated his war on social media companies Thursday, signing an executive order challenging the liability protections that have served as a bedrock for unfettered speech on the internet.

Still, the move appears to be more about politics than substance, as the president aims to rally supporters after he lashed out at Twitter for applying fact checks to two of his tweets.

Trump said the fact checks were "editorial decisions” by Twitter and amounted to political activism. He said it should cost those companies their protection from lawsuits for what is posted on their platforms.

Trump, who personally relies heavily on Twitter to verbally flog his foes, has long accused the tech giants in liberal-leaning Silicon Valley of targeting conservatives by fact-checking them or removing their posts.

"We’re fed up with it," Trump said, claiming the order would uphold freedom of speech.

It directs executive branch agencies to ask independent rule-making agencies including the Federal Communications Commission and the Federal Trade Commission to study whether they can place new regulations on the companies - though experts express doubts much can be done without an act of Congress.

A similar executive order was previously considered by the administration but shelved over concerns it couldn't pass legal muster and that it violated conservative principles on deregulation and free speech.

"They’ve had unchecked power to censor, restrict, edit, shape, hide, alter virtually any form of communication between private citizens or large public audiences," Trump said of social media companies as he prepared to sign the order. "There is no precedent in American history for so small a number of corporations to control so large a sphere of human interaction.”

Trump and his campaign reacted after Twitter added a warning phrase to two Trump tweets that called mail-in ballots "fraudulent” and predicted "mail boxes will be robbed.” Under the tweets, there’s now a link reading "Get the facts about mail-in ballots” that guides users to a page with fact checks and news stories about Trump’s unsubstantiated claims.

Trump accused Twitter of interfering in the 2020 presidential election” and declared "as president, I will not allow this to happen.” His campaign manager, Brad Parscale, said Twitter’s "clear political bias” had led the campaign to pull "all our advertising from Twitter months ago.” In fact, Twitter has banned political advertising since last November.

Dorsey added: "This does not make us an ‘arbiter of truth.’ Our intention is to connect the dots of conflicting statements and show the information in dispute so people can judge for themselves.”

"I just believe strongly that Facebook shouldn’t be the arbiter of truth of everything that people say online,” he said.

The president’s critics, meanwhile, scolded the platforms for allowing him to put forth false or misleading information that could confuse voters.

"Donald Trump’s order is plainly illegal,” said Oregon Sen. Ron Wyden, a Democrat and advocate for internet freedoms. He is "desperately trying to steal for himself the power of the courts and Congress.... All for the ability to spread unfiltered lies.”

Trump’s proposal has multiple, serious legal problems and is unlikely to survive a challenge, according to Matt Schruers, president of the Computer and Communications Industry Association, a Washington-based organization that represents computer and internet companies.

It would also seem to be an assault on the same online freedom that enabled social media platforms to flourish in the first place - and made them such an effective microphone for Trump and other politicians.

"The irony that is lost here is that if these protections were to go away social media services would be far more aggressive in moderating content and terminating accounts,” Schruers said. "Our vibrant public sphere of discussion would devolve into nothing more than preapproved soundbites.”

House Speaker Nancy Pelosi said it was "outrageous” that while Twitter had put a fact-check tag on Trump’s tweets asserting massive mail-in election fraud, it had not removed his tweets suggesting without evidence that a TV news host had murdered an aide years ago.

"Their business model is to make money at the expense of the truth and the facts that they know,” she said of social media giants, also mentioning Facebook. She said their goal is to avoid taxes "and they don’t want to be regulated, so they pander to the White House.”

The president and fellow conservatives have been claiming, for years, that Silicon Valley tech companies are biased against them. But there is no evidence for this - and while the executives and many employees of Twitter, Facebook and Google may lean liberal, the companies have stressed they have no business interest in favoring on political party over the other.

The trouble began in 2016, two years after Facebook launched a section called "trending,” using human editors to curate popular news stories. Zuckerberg met with prominent right-wing leaders at the time in an attempt at damage control, and in 2018, Facebook shut down the "trending” section,.

In August 2018, Trump accused Google of biased searches and warned the company to "be careful.” Google pushed back sharply, saying Trump’s claim simply wasn’t so, and experts suggested his comments showed a misunderstanding of how search engines work.

Meanwhile, the companies are gearing up to combat misinformation around the November elections. Twitter and Facebook have begun rolling out dozens of new rules to avoid a repeat of the false postings about the candidates and the voting process that marred the 2016 election.

The coronavirus pandemic has further escalated the platforms' response, leading them to take actions against politicians - a move they’ve long resisted - who make misleading claims about the virus.

Last month, Twitter began a "Get the Facts” label to direct social media users to news articles from trusted outlets next to tweets containing misleading or disputed information about the virus.

Even as he and his supporters complain of bias on the platform, Trump has used Twitter to build a potent and vocal online following. The president’s account currently has more than 80 million followers.

Trump’s success on social media suggests that his proposal may be more about politics than an actual interest in regulation, according to Rutgers University media professor John Pavlik, who studies the impact of technology on society and government.

Pavlik said that by trying to intimidate the platforms now, he’s seeking to control how the 2020 campaign plays out online and "about appealing to his base.”