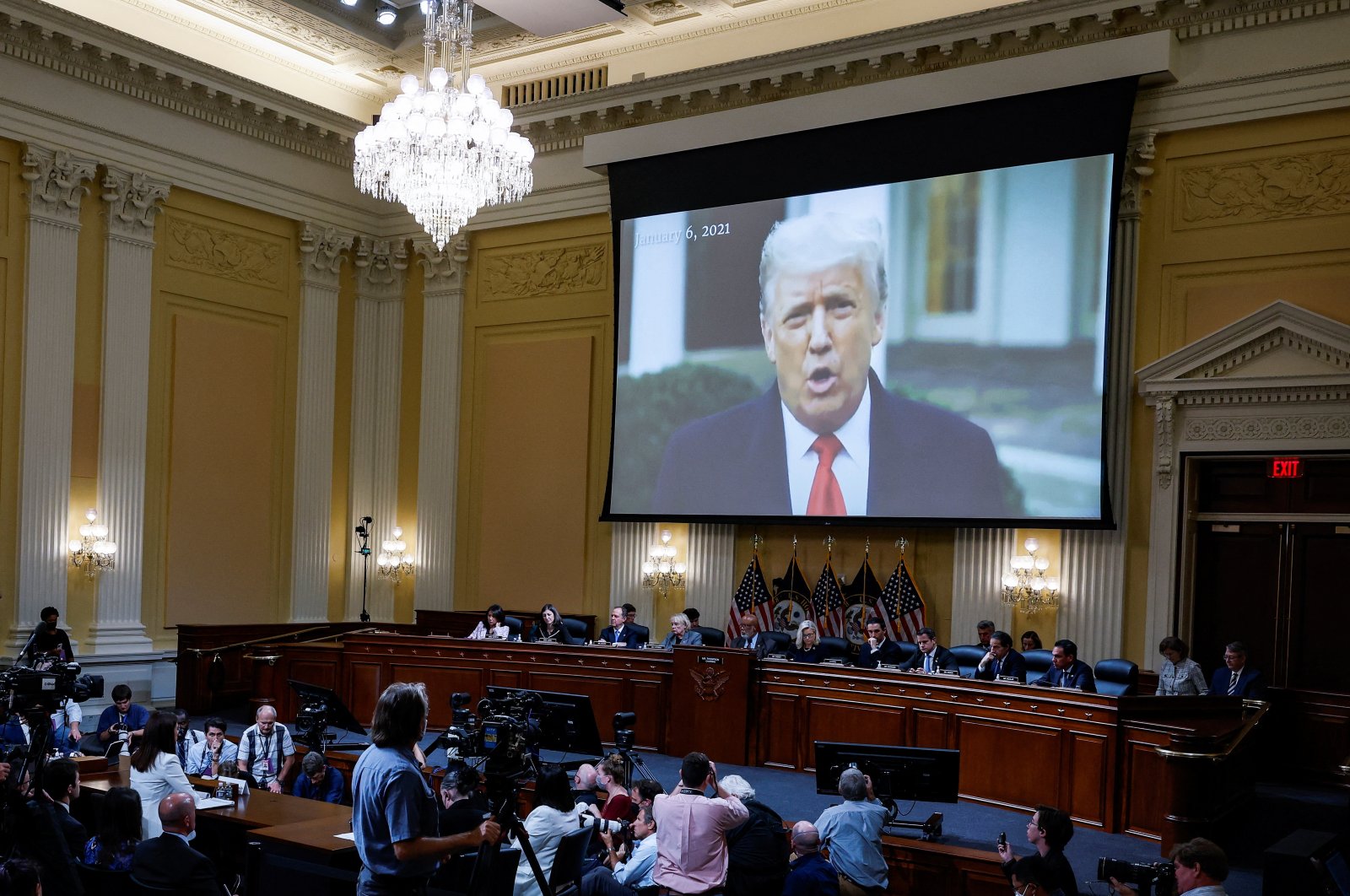 A video of former U.S. President Donald Trump is played as Cassidy Hutchinson, who was an aide to former White House Chief of Staff Mark Meadows during the Trump administration, testifies during a House Select Committee public hearing that investigates the Jan. 6 attack on the U.S. Capitol, Washington, U.S., June 28, 2022. (Reuters Photo)
by Reuters Jun 29, 2022 9:33 am
RECOMMENDED

Former U.S. President Donald Trump tried to grab the steering wheel of his presidential limousine on Jan. 6, 2021, when his security detail declined to take him to the United States Capitol where his supporters were rioting, a former aide testified on Tuesday.

The then-president dismissed concerns that some supporters gathered for his fiery speech outside the White House that day carried AR-15-style rifles, instead asking security to stop screening attendees with metal-detecting magnetometers so the crowd would look larger, the aide testified.

"Take the effing mags away; they're not here to hurt me," Cassidy Hutchinson, who was a top aide to Trump's then-White House Chief of Staff Mark Meadows, quoted Trump as saying that morning.

Hutchinson, in testimony on the sixth day of House of Representatives hearings into the deadly Jan. 6 Capitol assault by Trump's followers, said the conversation was relayed to her by Tony Ornato, a senior Secret Service official who was Trump's deputy chief of staff for operations.

The New York Times and NBC, citing sources in the Secret Service, said the head of Trump's security detail, Robert Engel, and the limousine driver were prepared to testify under oath that Trump never lunged for the steering wheel. Engel was in the room when Ornato relayed the story, Hutchinson said.

The New York Times and CNN, citing unnamed sources, said Ornato also denied the story and was willing to testify.

Citing her conversation with Ornato, Hutchinson testified that Trump struggled with Secret Service agents who insisted he return to the White House rather than join supporters storming the Capitol where Congress was meeting to certify Democrat Joe Biden's victory over him in the presidential election.

"'I'm the effing president. Take me up to the Capitol now,'" Hutchinson quoted an enraged Trump as saying. She said Trump tried from the back seat to grab the steering wheel of the heavily armored presidential vehicle and lunged in anger at a Secret Service official.

Trump, a Republican, denied her account of his actions.

"Her Fake story that I tried to grab the steering wheel of the White House Limousine in order to steer it to the Capitol Building is 'sick' and fraudulent," Trump wrote on Truth Social, his social media app.

In a statement, the Secret Service said it was cooperating fully with the committee and would continue to do so.

"We learned of the new information shared at today’s hearing and plan on responding formally and on the record as soon as they can accommodate us," it added.

Hutchinson's lawyer Jody Hunt wrote on Twitter that she had "testified, under oath, and recounted what she was told. Those with knowledge of the episode also should testify under oath."

Dozens of courts, election officials and reviews by Trump's own administration rejected his fraud claims, including outlandish stories about an Italian security firm and the late Venezuelan President Hugo Chavez's tampering with U.S. ballots.

Four people died the day of the attack, one fatally shot by police and the others of natural causes. More than 100 police officers were injured, and one died the next day. Four officers later died by suicide.

At the end of about two hours of testimony, Representative Liz Cheney, one of two Republicans on the nine-member House panel, presented possible evidence of witness tampering and obstruction of justice.

Cheney showed messages to unidentified witnesses advising them that an unidentified person would be watching their testimony closely and expecting loyalty.

Republican Mick Mulvaney, who served as Trump's chief of staff before Meadows, tweeted: "There is an old maxim: it's never the crime, it's always the cover-up. Things went very badly for the former President today. My guess is that it will get worse from here."

Giuliani told WSYR radio in Syracuse, New York, on Tuesday that he had not sought a pardon.

Speaking in soft but assured tones, Hutchinson, 26, painted a picture of panicked White House officials bristling at the possibility of Trump's joining what was to become a violent mob pushing its way into the Capitol, hunting for his vice president, Mike Pence, House Speaker Nancy Pelosi and other lawmakers who were certifying the victory of Biden over Trump.

The White House officials' worries focused on the potential criminal charges Trump and others could face.

"We're going to get charged with every crime imaginable," Hutchinson said White House counselor Pat Cipollone told her if Trump were to go to the Capitol on Jan. 6.

"'We need to make sure that this doesn't happen, this would be a really terrible idea for us. We have serious legal concerns if we go up to the Capitol that day,'" Cipollone said, Hutchinson testified.

Hutchinson, who sat doors away from Trump's Oval Office, testified that days before the attack on the U.S. Capitol, Meadows knew of the looming violence that could unfold.

"'Things might get real, real bad on Jan. 6,'" she quoted him as saying inside the White House on Jan. 2 with her boss.

At that point, she told the committee of seven Democrats and two Republicans: "It was the first moment that I remembered feeling scared and nervous of what could happen on Jan. 6."

This month's hearings featured videotaped testimony from figures including Trump's oldest daughter, Ivanka Trump, and his former attorney general, Bill Barr. They and other witnesses testified that they did not believe Trump's false claims of widespread fraud and tried to dissuade him of them.

Before resigning, Barr told the Associated Press (AP) in an interview there was no evidence of fraud. That angered Trump so much that he threw his lunch at a White House wall, breaking a porcelain dish and leaving ketchup dripping down the wall, according to video testimony to the committee from Kayleigh McEnany, Trump's White House press secretary at the time.

Hutchinson told the committee it was not unusual for Trump to throw food when he was angry: "There were several times throughout my tenure with the chief of staff that I was aware of him either throwing dishes or flipping the tablecloth to let all the contents of the table go onto the floor and likely break or go everywhere."