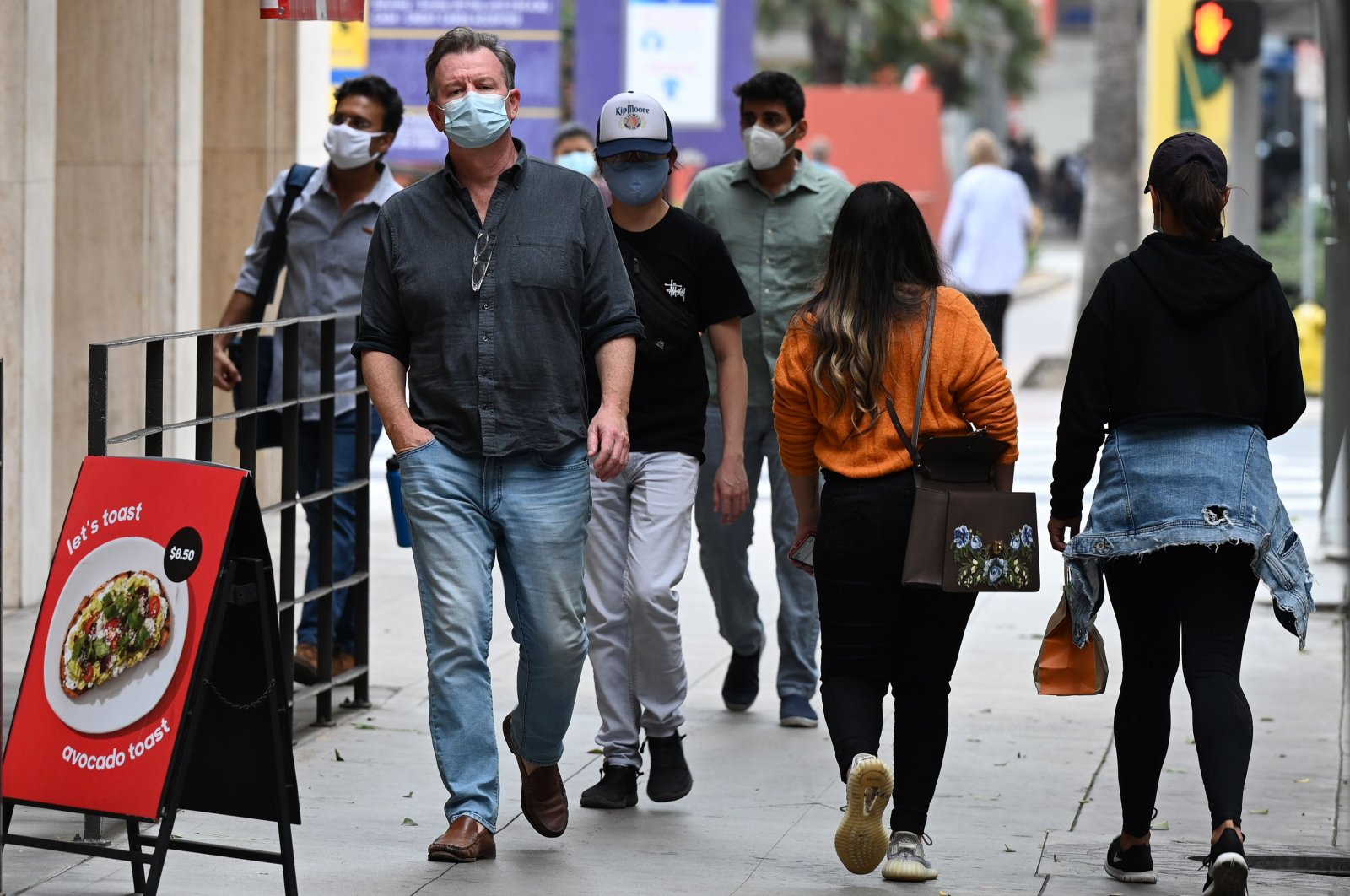 People wearing masks to prevent the spread of the coronavirus walk in downtown Los Angeles, California, Nov. 5, 2020. (AFP Photo)
by DAILY SABAH WITH AGENCIES
Nov 09, 2020 11:17 am

The United States became the first country to surpass 10 million coronavirus infections, accounting for roughly 20% of global cases that have exceeded 50 million as of Sunday.

America has reported about a million cases in the past 10 days, the highest rate of infections since it documented its first case in Washington state 293 days ago, as a third wave of the virus surges across the nation.

The country's most recent seven-day average of 105,600 daily cases, which is up by at least 29%, is more than the combined average for India and France, two of the worst-affected countries in Asia and Europe.

More than 237,000 Americans have died of COVID-19 since the illness caused by the coronavirus first emerged in China late last year. The daily average of reported new deaths in the United States accounts for one in every 11 deaths reported worldwide each day, according to a Reuters analysis. The number of reported fatalities nationwide climbed by more than 1,000 for a fifth consecutive day on Saturday, a trend last seen in mid-August, according to a Reuters tally. Health experts say deaths tend to increase four to six weeks after a burst in infections.

The latest U.S. surge coincided with the last month of election campaigning in which President Donald Trump minimized the severity of the pandemic and his successful challenger, Joe Biden, urged a more science-based approach. Trump rallies, some open-air and with few masks and little social distancing, led to 30,000 additional confirmed cases and likely led to more than 700 deaths, Stanford University economists estimated in a research paper.

Based on cases per capita, the Midwest remains the hardest-hit region with North Dakota, South Dakota, Wisconsin, Iowa and Nebraska the top five worst-affected U.S. states. Illinois emerged as the new epicenter in the Midwest, with the state reporting over 60,000 COVID-19 infections in the last seven days, the highest in the country, according to Reuters data.

Texas, which accounts for 10% of total U.S. cases, is the hardest-hit state and became the first to surpass a million coronavirus infections in the country. According to a Reuters analysis, the South region comprises nearly 43% of all the cases in the U.S. since the pandemic began, with nearly 4.3 million infections in the region alone, followed by the Midwest, West and Northeast.

New York, with over 33,000 fatalities, remains the state with the highest number of deaths and accounts for about 14% of total U.S. fatalities.

October was the worst month for the pandemic so far. The latest seven-day average shows global daily infections are rising by more than 540,000. Over 1.25 million people have died from the respiratory disease that emerged in China late last year. The pandemic's recent acceleration has been ferocious. It took 32 days for the number of cases to rise from 30 million to 40 million. It took just 21 days to add another 10 million.

Europe, with about 12 million cases, is the worst-affected region, overtaking Latin America. Europe accounts for 24% of COVID-19 deaths. The global second wave is testing health care systems across the continent, prompting Germany, France and Britain to order many citizens back to their homes again. Denmark, which imposed a new lockdown on its population in several northern areas, ordered the culling of its 17 million minks after a mutation of the coronavirus found in the animals spread to humans.