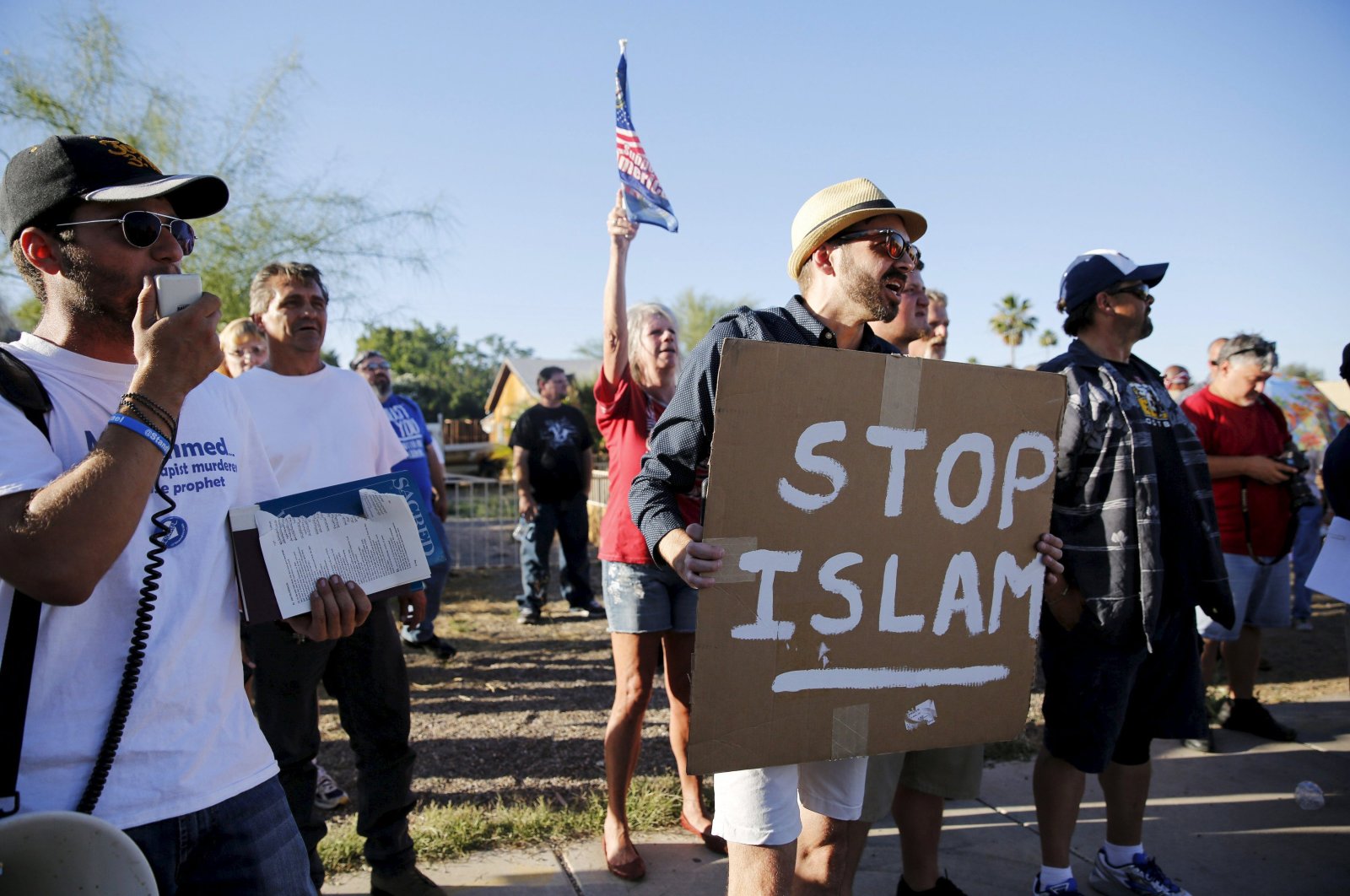 Demonstrators shout during a "Freedom of Speech Rally Round II" outside the Islamic Community Center in Phoenix, Arizona, U.S., May 29, 2015. (Reuters Photo)
by Anadolu Agency Apr 16, 2021 2:33 pm
RECOMMENDED

The first Muslim mayor of Irvine, California said that she had a difficult time getting to the city's top office due to a strong anti-Islam attitude in the region.

She first considered running for office in 2014 but was told, "Irvine was not ready for diversity in leadership and that with a name like mine, I was unelectable."

Not deterred, Khan continued to work for her community and in 2018 she ran again and won with the most votes of 12 candidates as a city council member.

"Then in 2020, I ran for mayor and not only won with the most votes, but also set a record number of votes ever received for mayor in Irvine and defeated a 26-year incumbent," she said.

'Each election there have been Islamophobic threats'

Khan has faced Islamophobic threats in every election in which she has competed.

The mayor said in the 2020 elections her opponent filed a federal complaint against her simply for visiting Azerbaijan, a Muslim-majority nation.

Irvine can maintain unity, competition based on trust

Khan has big visions for her beloved Irvine. She said she wants to create an international hub in the city, provide access to business relocation and create a diverse set of housing options while maintaining Irvine's vast open spaces.

"But most importantly, I want everyone to feel safe and at home in our city," she said.

Khan contends that her administration can maintain unity and competition based on trust between residents and elected officials in a mixed society like Irvine.

"With trust, we can solve problems by understanding and compromising," she said. "Competition is always good because it provides people options. I don't plan on being in this role for a long time, unlike my predecessors. So I look forward to political competitions."

Khan, who is also a small business owner, said it is "very tough and very demanding" being the mayor of a high gross domestic product (GDP) city.

"While I am working to increase our businesses in order to generate more revenue for the city, I have to make sure that we lower our COVID-19 case numbers and people have access to vaccines, while also making sure that housing development, infrastructure, and transportation continue to function," she said.

"In order to keep our city financially stable during this pandemic, I have built strong relations with the county, state and federal representatives to provide financial assistance to our businesses and renters, while seeking funds for new and innovative projects," said Khan. "And most importantly, those people are satisfied with their quality of life here."

The next potential disaster is on the minds of every elected official but Khan said that Irvine has a "very robust" plan for the kind of situation that occurred like recent power outages in the state of Texas because of a cold snap.

"We have trained staff that focus on preventive measures, create plans for disasters and continuously hold exercises to make sure the plans are effective," she said.

The outages in Texas were a "unique" situation because that state privatized their electricity, "which means they didn't have much government oversight," she said.

"In Irvine, I actually worked to pass Community Choice Energy in our city in 2020," she said, adding that under her plan, her city, along with other cities that join Irvine, procure energy while using the infrastructure of Southern California Edison, the primary electricity supply company for that area of the state.

"This way, we can purchase energy ahead of time so that we know there will be little to no disruptions," said Khan. "Plus, it enables us to move towards using renewable energy sources as well."

Khan, who grew up in the San Francisco/Bay Area, graduated from the University of California, Davis, and moved to Irvine in 2004.

She served as executive director for a local nonprofit, Newport Mesa Irvine Interfaith Council, in which she worked with the local faith communities and other nonprofits to tackle issues like homelessness and human trafficking.