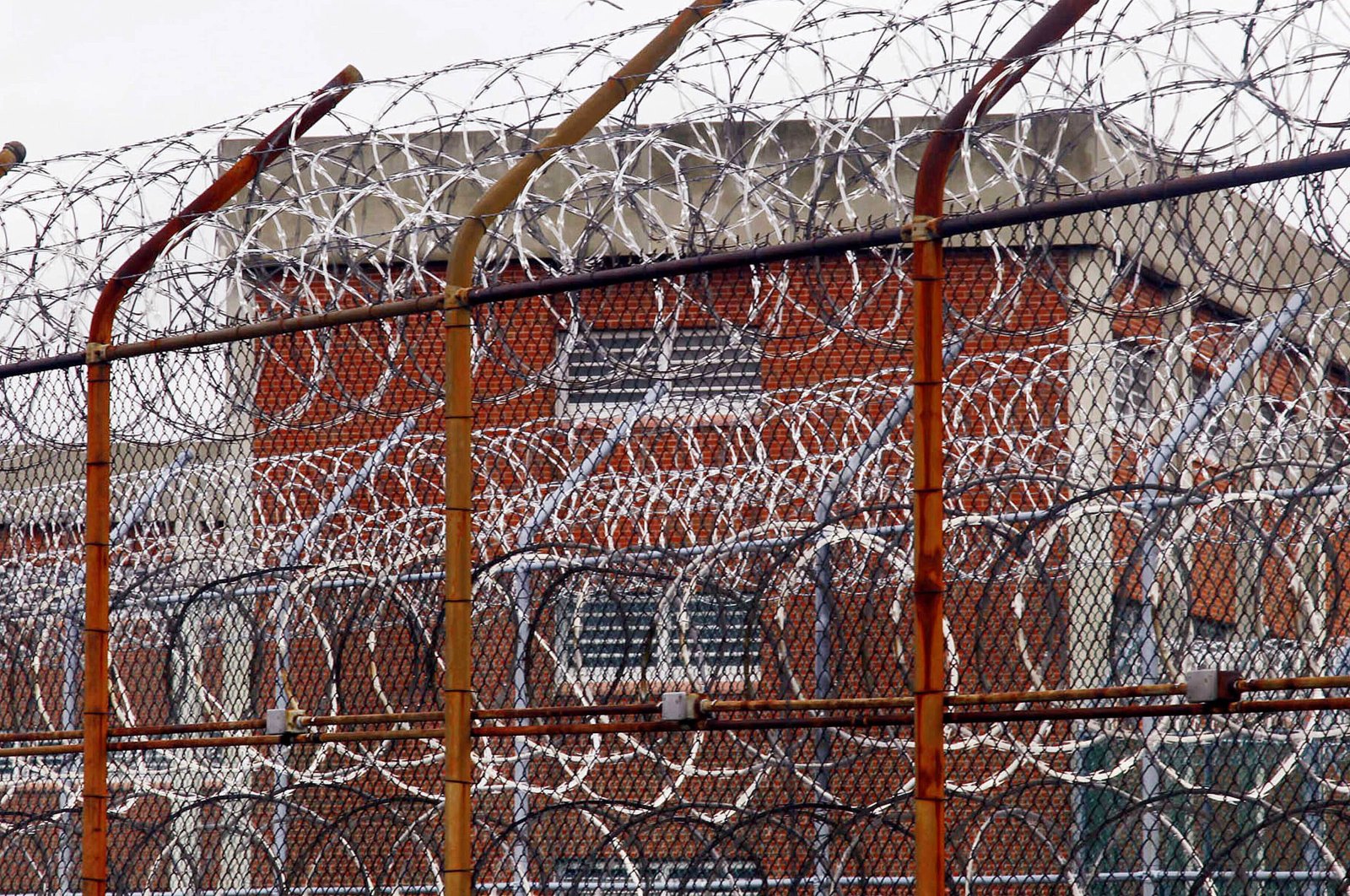 In this March 16, 2011, file photo, a security fence surrounds inmate housing at the Rikers Island correctional facility in New York. As of May 6, 2020, more than 20,000 inmates have been infected by the coronavirus and 295 have died nationwide, according to an unofficial tally kept by UCLA Law's COVID-19 Behind Bars Data Project. (AP File Photo)
by ASSOCIATED PRESS May 08, 2020 11:19 am
RECOMMENDED

As factories and other businesses remain shuttered across the United States, people in prisons in at least 40 states continue going to work. Sometimes they earn pennies an hour, or nothing at all, making masks and hand sanitizer to help guard others from the coronavirus.

Those same men and women have been cut off from family visits for weeks, but they get charged up to $25 for a 15-minute phone call – plus a surcharge every time they add credit.

They also pay marked-up prices at the commissary for soap so they can wash their hands more frequently. That service can carry a 100% processing fee.

As COVID-19 cripples the economy, leaving millions unemployed and many companies on life support, big businesses that have become synonymous with the world’s largest prison system are still making money.

"It’s hard. Especially at a time like this, when you’re out of work, you’re waiting for unemployment ... and you don’t have money to send,” said Keturah Bryan, who transfers hundreds of dollars each month to her 64-year-old father at a federal prison in Oklahoma.

"You have to pay for phone calls, emails, food," she said. "Everything."

The coronavirus outbreak has put an unlikely spotlight on America’s jails and prisons, which house more than 2.2 million people and have been described by health experts as petri dishes as the virus spreads.

Masks and hand sanitizer often aren't provided. Testing is rarely carried out, even among those with symptoms, despite fears that surrounding communities may be affected. And in some parts of the country, those sickened by the virus languish in sweltering buildings with poor ventilation.

The concerns extend to outsourced prison health care, frequently accused by experts of offering substandard treatment even in the best of times.

Sheron Edwards shares a dorm with 50 other men at Chickasaw County Regional Correctional Facility in Mississippi. Given his past experiences with the prison’s medical provider, Centurion, he worries about what will happen if coronavirus hits.

When he was at the state's notorious Parchman prison several years ago, Edwards said the company refused to pay for costly heart medication and only provided one session of physical therapy when he had to have a 6-inch (15-centimeter) rod and screws placed in his broken ankle.

"Even though that wasn’t life-threatening, it was serious,” he said. "With COVID-19, I could actually lose my life.”

More than 20,000 prisoners have been infected and 295 have died nationwide – from Rikers Island in New York City to federal, state and local lockups coast to coast, according to an unofficial tally kept by the COVID-19 Behind Bars Data Project run by UCLA Law.

On Wednesday, officials in San Diego announced the first death of a detainee in a U.S. Immigration and Customs Enforcement detention center.

When incarceration rates soared to record highs in the 1980s and ’90s, some corporations saw a business opportunity. They promised lower costs and, in many cases, profit-sharing agreements. Prison and jail administrators started privatizing everything from food and commissary to entire operations of facilities.

Proponents of for-profit prisons say it’s cheaper for private companies to run facilities than the government, arguing it’s easier to cancel contracts and there is more incentive to provide better service. They say that leads to improved living conditions and more effective rehabilitation of the incarcerated back into society with the ultimate goal of reducing recidivism.

But not everyone agrees. In 2019, criminal and immigration justice advocates successfully moved nine major banks, including J.P. Morgan and Bank of America, to stop lending money to private prisons.

Today, some of corporate America’s biggest names, and many smaller companies, vie for a share of the $80 billion spent on mass incarceration each year in the U.S., roughly half of which stays in the public sector to pay for staff salaries and some health care costs, according to the Massachusetts-based nonprofit Prison Policy Initiative.

A new report released Thursday by New York-based advocacy group Worth Rises detailed some 4,100 corporations that profit from the country’s prisons and jails. It identified corporations that support prison labor directly or through their supply chains. The group also recommended divesting from more than 180 publicly traded corporations and investment firms considered to cause the greatest harm to people behind bars and the communities that support them.

"The industry behind mass incarceration is bigger than many appreciate. So is the harm they cause and the power they wield,” said Bianca Tylek, the group’s founder and director.

"They exploit and abuse people with devastating consequences," she said. "Of course, they aren’t unilaterally responsible for mass incarceration, but they’re part of the ecosystem propping it up.”

The report includes vendors that stock commissaries with Cup Noodles and Tide laundry detergent, along with contracted health care providers that have been sued for providing limited or inadequate coverage to those behind bars.

There are companies like Smith & Wesson that make protective gear for correctional officers and Attenti that supply electronic ankle bracelets. Other household names, such as Stanley Black & Decker, have entire units dedicated to manufacturing accessories for prison doors.

Incarcerated people also work, making everything from license plates to body armor vests and mattresses. In California, some even serve as firefighters. But in some places, they are employed by major corporations such as Minnesota-based 3M.

Billed as a cheap alternative to foreign outsourcing, inmates also previously provided goods to Starbucks, Victoria’s Secret and Whole Foods, sparking an uproar that caused many big-name companies to bow out.

Some people leave their lockups to do jobs in the community, such as fast food restaurants. State-owned businesses have also cropped up around the massive prison labor industries, including some with almost comical names, such as Big House products in Pennsylvania and Rough Rider Industries in North Dakota.

While some jobs might pay minimum wage as required by federal law for goods that enter interstate commerce, the take-home pay of workers in correctional industries can be as low as 20% of their stated wage after garnishment for room and board, restitution and other costs.

Meanwhile, private companies market catalogs full of products to lockups. One website advertises an array of pricey bondage items: leather bed restraints for $267, ankle hobbles for $144 and a metal waist chain with handcuffs going for $76.95.

An Alabama company markets video conferencing systems as a replacement for in-person visits under a call box with the face of an elderly woman in glasses shown on the monitor inside. Beside it reads the slogan: "Keep Granny’s shank pies away from your facility.”

Bobby Rose, one of the report’s researchers, served 24 years in New York state prisons, where he spent a lot of time thinking about the role money plays in America’s legal system.

He was shocked to learn just how many big-name companies were involved and how much was being made off not only those behind bars, but also their families who are often poor and members of racial minorities – a particularly poignant concept during the pandemic.

"I feel,” he said, "that some of these companies that really profit could have provided ... sanitizer or even gave free soap.”

He still thinks about friends left in prison. Two of them have succumbed to the virus.