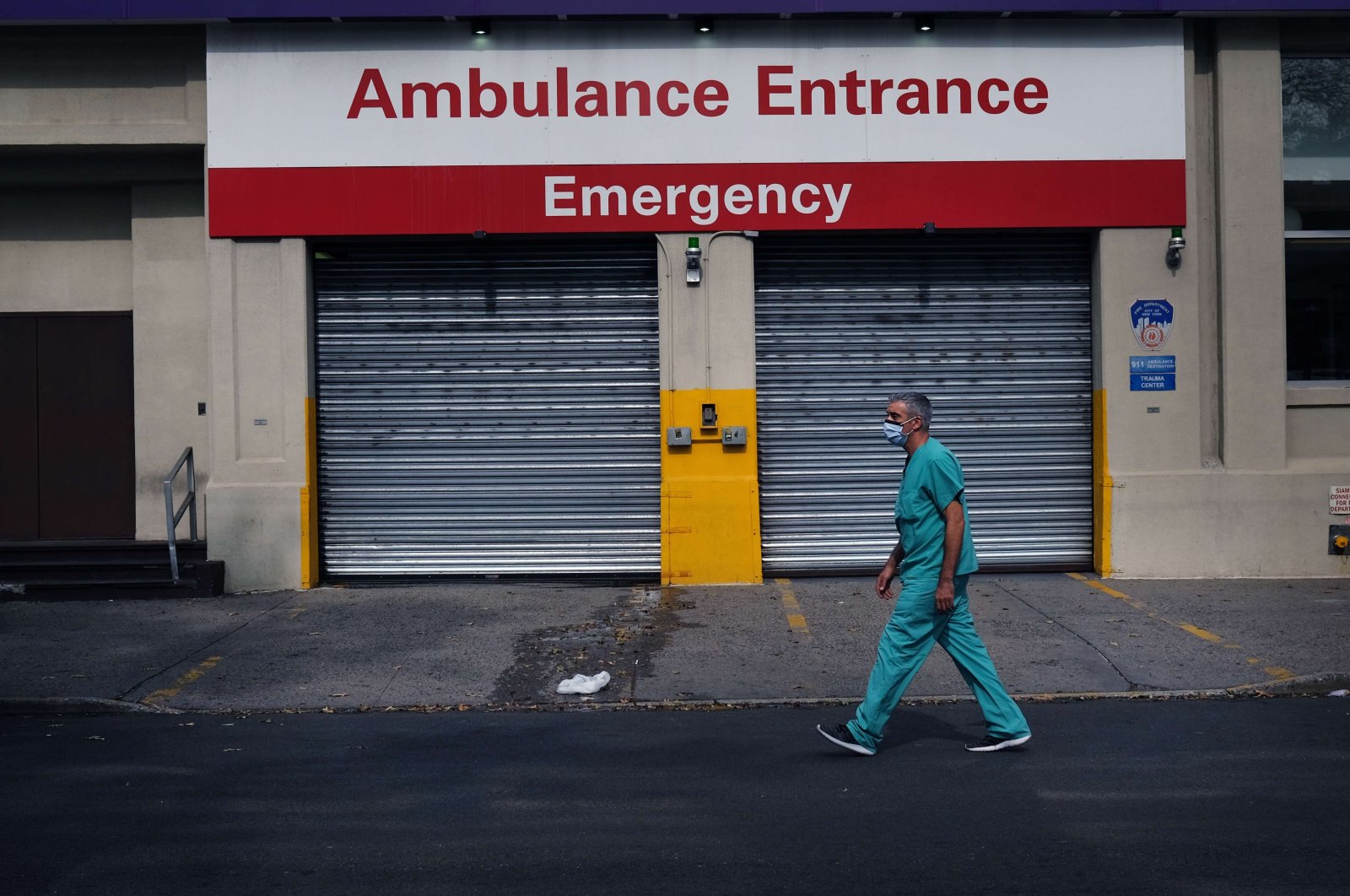 A medical worker walks by a hospital in a neighborhood that saw a significant number of COVID-19 cases early on in the pandemic in Brooklyn, New York City, New York, U.S., Sept. 14, 2020. (AFP Photo)
by ASSOCIATED PRESS Sep 15, 2020 6:26 pm
RECOMMENDED

The international reputation of the U.S. has declined further in the wake of its handling of the coronavirus pandemic, according to new research Tuesday from the Pew Research Center.

In some of the 13 countries surveyed, favorable views of the U.S. have fallen to record lows. Pew started polling on the topic nearly two decades ago.

Although the international image of the U.S. has been in decline since President Donald Trump took office in 2017, Pew found it has been dented further by what is perceived to be a badly handled response to the pandemic.

Pew found that a median of just 15% of respondents said the U.S. had done a good job handling the crisis, in contrast to perceptions of the World Health Organization (WHO) or the European Union, both of which enjoy majority approval.

Though new infections in the U.S. appear to have moderated over the past few weeks, the country has the world’s highest official virus-related death toll with around 195,000 deaths. Much of the blame internationally appears to have been laid at Trump's door. The president has raised eyebrows around the world during the past few months with some of his comments on the virus and how it should be handled.

The international declines that Pew gauged were widespread, including among the U.S.'s traditional allies. In the U.K., for example, Pew found that just 41% of people express a favorable opinion of the U.S., the lowest recorded rate.

In France, only 31% see the U.S. positively, matching the low level recorded in 2003 when the two countries were at loggerheads over the U.S.-led war in Iraq. Germans are particularly negative in their views of the U.S., with only 26% of those polled viewing the country favorably, just above the 25% level in 2003, when Germany, like France, opposed the Iraq war.

Of the countries surveyed, only South Korea was found to have a majority of people with a favorable view of the U.S., with 59% support.

The president’s ratings were low across the board, particularly in Belgium where just 9% of those polled had a favorable view of Trump. The Japanese were the most positive, though even there only 25% expressed confidence in Trump.

Pew said attitudes toward Trump have consistently been much more negative than those toward his predecessor, Barack Obama, especially in Western Europe. It said that in the U.K., Spain, France and Germany, ratings for Trump are similar to those received by George W. Bush near the end of his presidency when his reputation was dented by violence in Iraq as well as the start of the global financial crisis.

Trump was also perceived in a more negative light than other world leaders. German Chancellor Angela Merkel received the most support, with a median of 76% of people across the nations polled having confidence in her. French President Emmanuel Macron also received largely favorable ratings while those toward British Prime Minister Boris Johnson were more mixed. Pew also found that the ratings for Russian President Vladimir Putin and Chinese President Xi Jinping were overwhelmingly negative too, though not as negative as Trump’s.

Pew said it used data from nationally representative surveys of 13,273 adults from June 10 to Aug. 3, in Canada, Belgium, Denmark, France, Germany, Italy, the Netherlands, Spain, Sweden, the U.K., Australia, Japan and South Korea. Due to restrictions related to the pandemic, all surveys were conducted by phone.