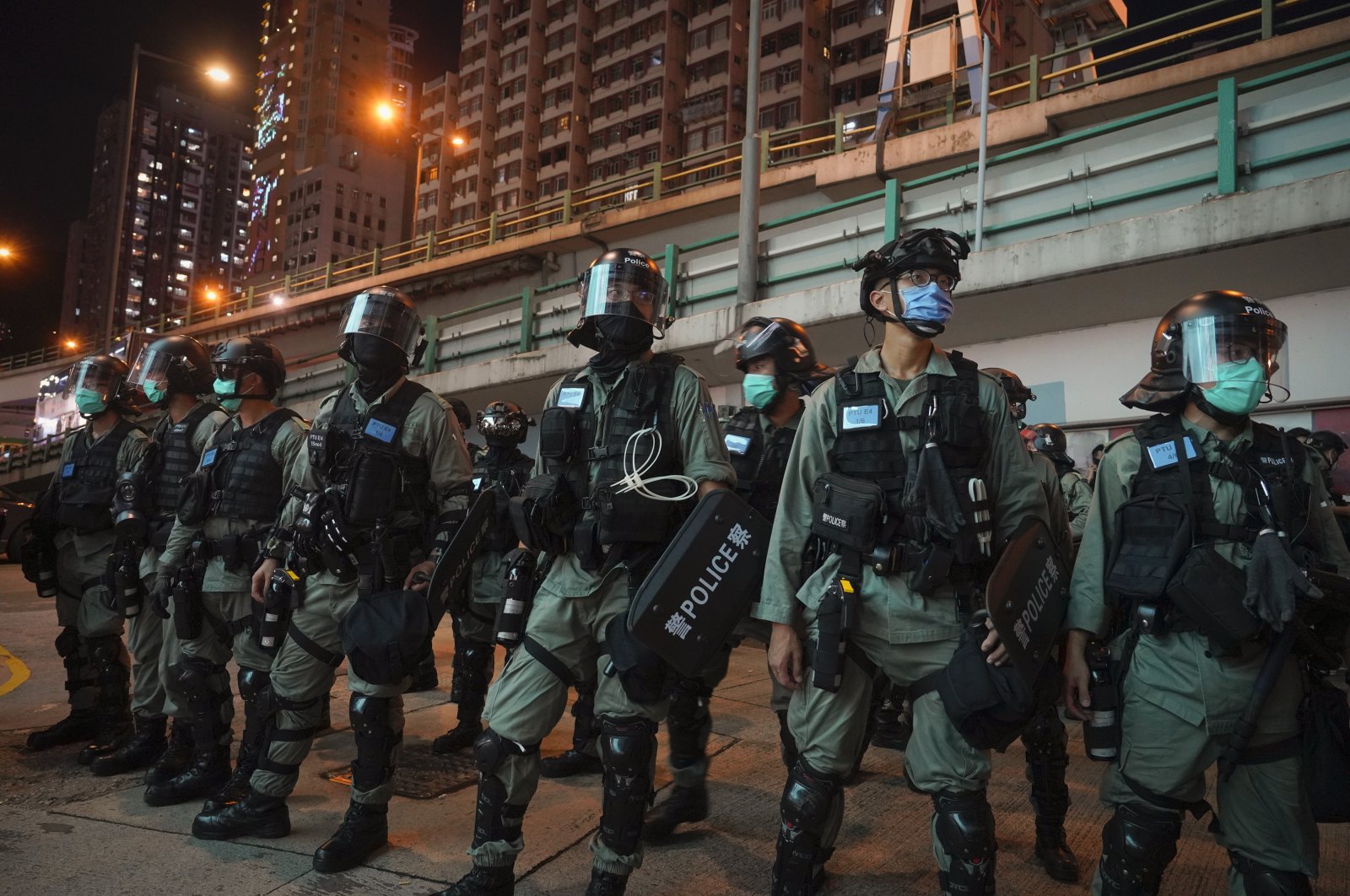 Riot police stand guard after pushing back protesters demonstrating against the new security law during the anniversary of the Hong Kong handover from Britain, Wednesday, July. 1, 2020, in Hong Kong. (AP Photo)
by French Press Agency - AFP Jul 02, 2020 9:20 am
RECOMMENDED

The U.S. House of Representatives agreed unanimously Wednesday to seek tough sanctions on Chinese officials and Hong Kong police after Beijing imposed a security law that clamps down on the city.

After a day in which Hong Kong authorities arrested hundreds of protesters, the House quickly passed the act that had already passed the Senate last week.

Due to technical changes, the Senate will need to vote again. Senator Chris Van Hollen, a Democrat who co-sponsored the bipartisan bill, vowed that the chamber would vote Thursday.

"What's so sad about it is that the Chinese regime just thinks that they can act with impunity and repressing the spirit of democracy," Speaker Nancy Pelosi said before the House passage.

President Donald Trump has not said if he will sign the bill but one of his allies briefly held up the Senate version, seeking changes.

Trump publicly hesitated last year before signing another rights bill on Hong Kong which also lays out sanctions against Chinese officials for infringing on the city's autonomy.

Unlike the previous act, the new legislation would make sanctions mandatory, limiting Trump's ability to waive them. In a crucial pressure point, it would also slap sanctions on banks that conduct transactions with violators.

China on Tuesday imposed the long-threatened security law in Hong Kong that criminalizes "subversion" and other acts of dissent in a city to which it had promised separate freedoms.

On Wednesday, Hong Kong police cracked down on protesters marking the anniversary of the city's 1997 handover from Britain, arresting about 370 people — including 10 under the new law.

Joe Biden, the presumptive Democratic nominee for president, accused Trump of allowing China to impose its will on Hong Kong through a hesitant response.

"It's no wonder Beijing is acting with impunity. Time and again, President Trump has surrendered our values and reassured China's autocrats they have a like-minded partner in the White House," Biden said in a statement.

"Where Trump has been weak, I will be strong, clear and consistent in standing up for our values," he said.

The Trump administration has taken a series of actions in response to China's moves on Hong Kong, including restricting visas to an unspecified number of officials and blocking high-tech exports to the financial hub.

Critics say the actions were not enough and that Trump has prioritized a trade deal with President Xi Jinping.

"Hong Kong has been on the backburner in an effort to sell soybeans and we haven't even sold the soybeans," Representative Brad Sherman, a Democrat, told the congressional hearing.

Biden's hard-hitting response came after Trump has tried to link his rival to Beijing, pointing to his extensive interactions with China as Barack Obama's vice president.

Biden said that, if elected president, he would "fully enforce" laws on the rights of Hong Kong and Xinjiang, where China has detained some one million Uighurs and other Turkic Muslims.

Secretary of State Mike Pompeo hinted that the Trump administration will do more to punish China — by reducing the special privileges of Hong Kong.

Trump "wants to ensure, with a handful of exceptions, that Hong Kong is treated just like mainland China because that's the way that General Secretary Xi has chosen to treat that place as well," Pompeo told reporters.