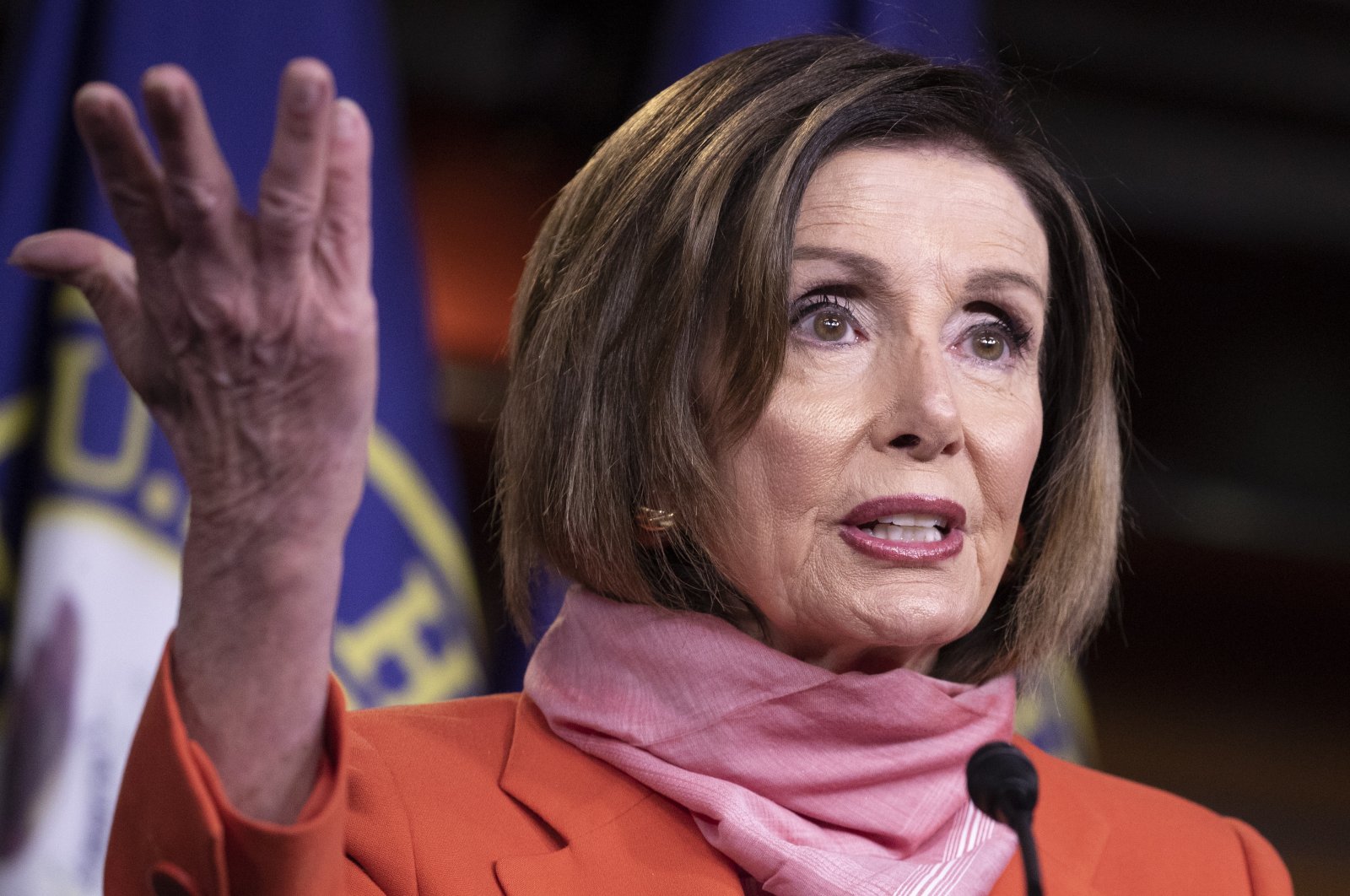 US Speaker of the House Nancy Pelosi holds a news conference on Capitol Hill in Washington, DC, USA, 24 April 2020. Pelosi held the news conference as US President was scheduled to sign the 484 billion USD relief package that includes hundreds of billions of dollars in funding for small businesses affected by the coronavirus COVID-19 pandemic. (EPA Photo)
by Compiled from Wire Services Apr 27, 2020 1:03 pm
RECOMMENDED

U.S. House Of Representatives Speaker Nancy Pelosi has endorsed Joe Biden for president, according to a video statement released by her on Monday.

"Today I am proud to endorse Joe Biden for president of the United States because he will be an extraordinary president," the speaker of the House of Representatives said in the pre-recorded message.

In her statement, Pelosi lauded the former senator from Delaware as a man of "empathy, grace and courage" and "a leader with the humility to seek expertise in science and the confidence to act on it."

"As we face coronavirus Joe Biden has been a voice of reason and resilience with a clear path to lead us out of this crisis," she said.

Her support wasn't unexpected now that Biden is the presumptive Democratic nominee to take on President Donald Trump in November. Still, her backing ratifies Biden’s contention that he is the party’s best chance to keep the House majority and regain Senate control from Republicans.

Pelosi spearheaded Democrats’ midterm House victories in 2018, when Democrats won more than 40 Republican-held seats to take the majority and hand Pelosi a second turn as the first woman speaker in U.S. history. Most of the party’s gains came in battleground districts anchored by suburbs and exurbs, places where the Biden campaign believes he can outpace Trump in November.

Biden campaigned for many of the current House freshmen, and he often cited their victories during his primary campaign against progressive presidential rivals. He argued that Democrats succeeded in the 2018 midterms because they did not move too far to the left in historically Republican-leaning districts. Pelosi has said repeatedly that Democrats win when they recruit candidates who "fit their district.”

The approach has exposed both Biden and Pelosi subject to criticism from Democrats’ left flank. Both argue against the "Medicare for All” single-payer insurance proposal advance by progressive Democrats, including Biden's former primary rivals Bernie Sanders and Elizabeth Warren.

Pelosi and Biden counter with the argument that winning elections is the way to advance liberal policies. In the case of health care, their preferred next step is a "public option" government insurance plan that would compete with, but not replace private insurers.

The Biden-Pelosi alliance is not without political ironies. While Biden has worked for decades to cultivate his image as a working-class ally born in Scranton, Pennsylvania, Pelosi has been a favorite target of Republicans who caricature the wealthy San Francisco Democrat as out of touch with most Americans. And as more Democrats, including Sanders and Warren, have endorsed Biden, Republicans have stepped up their efforts to tar Biden as moving too far left.

Warren almost two weeks ago endorsed Biden, becoming the last of the former vice president's major Democratic presidential rivals to formally back him.

"In this moment of crisis, it's more important than ever that the next president restores Americans' faith in good, effective government – and I've seen Joe Biden help our nation rebuild," Warren wrote in a tweet.

"Today, I'm proud to endorse Joe Biden as President of the United States," she added.

Biden's chief rival, Bernie Sanders, endorsed him after suspending his campaign. Like Sanders' endorsement, Warren's support for Biden could help him make inroads with the party's left wing.

Obama endorsed Biden giving the presumptive Democratic presidential nominee a boost from the party’s biggest fundraiser and one of its most popular figures.

"Joe has the character and the experience to guide us through one of our darkest times and heal us through a long recovery," Obama said in a 12-minute video in which he argued the coronavirus pandemic reinforced the need for better leadership.