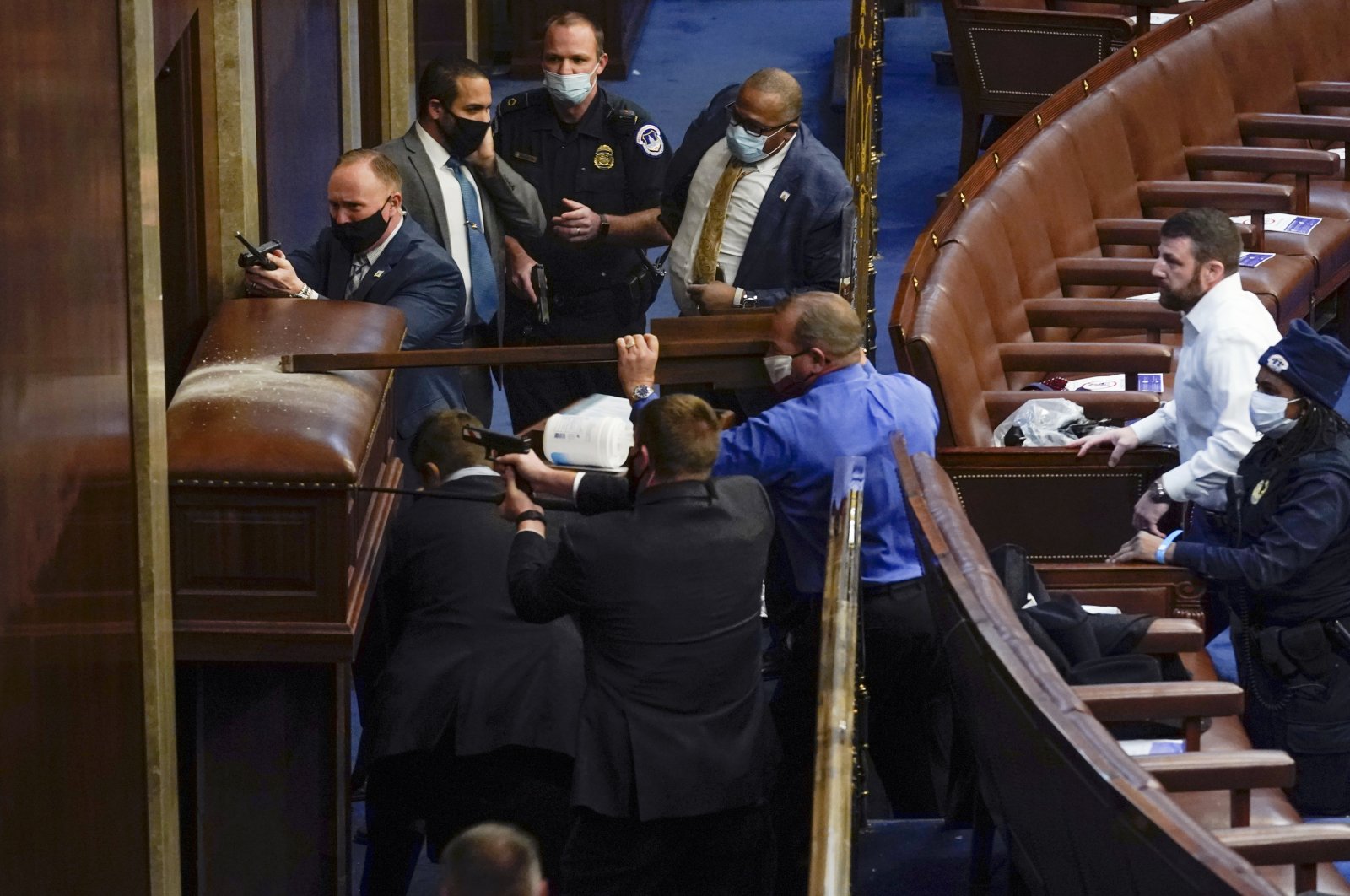 U.S. Capitol Police with guns drawn stand near a barricaded door as protesters try to break into the House Chamber at the U.S. Capitol on Wednesday, Jan. 6, 2021, in Washington. (AP Photo)
by DAILY SABAH WITH AGENCIES Jan 07, 2021 12:41 pm

Hundreds of President Donald Trump's supporters stormed the U.S. Capitol in a stunning bid to overturn his election defeat, battling police in the hallways and delaying the certification of Democratic President-elect Joe Biden's victory for hours

The game is over for outgoing U.S. President Donald Trump as his last chance to thwart the election's results has failed. Even the last hat trick he relied on left him empty handed.

Trump spent the lead-up to Congress' proceedings publicly hectoring the vice president, who had a largely ceremonial role, to aid the effort to throw out the results. He tweeted Wednesday: "Do it Mike, this is a time for extreme courage!”

But Mike Pence, in a statement shortly before presiding, defied Trump, saying he could not claim "unilateral authority” to reject the electoral votes that make Joe Biden president. His message was delivered right before the U.S. House of Representatives and Senate convened Wednesday in a joint session to ratify Biden's Electoral College win.

Trump had urged his supporters multiple times to come to Washington for a rally Wednesday, the day the U.S. House of Representatives and Senate were scheduled to certify the results of the Electoral College.

"Statistically impossible to have lost the 2020 Election," he tweeted on Dec. 20. "Big protest in DC on January 6th. Be there, will be wild!" His supporters turned out in the thousands and heard the president urge them to march on the Capitol building to express their anger at the voting process and to pressure their elected officials to reject the results.

In the gravest assault on the symbol of American democracy in more than 200 years, hundreds of pro-Trump demonstrators stormed the U.S. Capitol, forcing their way past metal security barricades, breaking windows and scaling walls to fight their way into the Capitol building on Wednesday. The nation’s elected representatives scrambled to crouch under desks and don gas masks, while police futilely tried to barricade the building, one of the most jarring scenes ever to unfold in a seat of American political power.

One demonstrator was killed – a woman who was part of a crowd that was breaking down the doors to a barricaded room where armed officers stood on the other side, police said. She was shot in the chest by Capitol Police and taken to a hospital where she was pronounced dead. City police said three other people died from medical emergencies during the long protest on and around the Capitol grounds. Staff members grabbed boxes of Electoral College votes as the evacuation took place.

The assault on the Capitol was the culmination of months of divisive and escalating rhetoric around the Nov. 3 election, with Trump repeatedly making false claims that the vote was rigged and urging his supporters to help him overturn his loss. Some Republican lawmakers were in the midst of raising objections to the results on his behalf when the proceedings were abruptly halted by the demonstrators.

Together, the protests and the GOP election objections amounted to an almost unthinkable challenge to American democracy and exposed the depths of the divisions that have coursed through the country during Trump's four years in office. Though the efforts to block Biden from being sworn in on Jan. 20 were sure to fail, the support Trump has received for his attempts to overturn the election results have badly strained the nation’s democratic guardrails.

Congress reconvened in the evening, lawmakers decrying the protests that defaced the Capitol and vowing to finish confirming the Electoral College vote for Biden’s election, even if it took all night. Before dawn Thursday, lawmakers completed their work, confirming Biden won the presidential election. Pence, presiding over the joint session, announced the tally, 306-232.

Trump, who had repeatedly refused to concede the election, said in a statement immediately after the vote that there will be a smooth transition of power on Inauguration Day.

"Even though I totally disagree with the outcome of the election, and the facts bear me out, nevertheless there will be an orderly transition on January 20th,” Trump said in a statement posted to Twitter by an aide. He added, "While this represents the end of the greatest first term in presidential history, it’s only the beginning of our fight to Make America Great Again!” The statement was the first time Trump formally acknowledged his loss.

Republican Senate Majority Leader Mitch McConnell said the "failed insurrection” underscored lawmakers’ duty to finish the count. Democratic House Speaker Nancy Pelosi said Congress would show the world "what America is made of" with the outcome.

The president gave his supporters a boost into action Wednesday morning at a rally outside the White House, where he urged them to march to the Capitol. He spent much of the afternoon in his private dining room off the Oval Office watching scenes of the violence on television. At the urging of his staff, he reluctantly issued a pair of tweets and a taped video telling his supporters it was time to "go home in peace" – yet he still said he backed their cause. Hours later, Twitter for the first time time locked Trump's account, demanded that he remove tweets excusing violence and threatened "permanent suspension.”

A somber President-elect Biden, two weeks away from being inaugurated, said American democracy was "under unprecedented assault, ” a sentiment echoed by many in Congress, including some Republicans. Former President George W. Bush said he watched the events in "disbelief and dismay.”

The domed Capitol building has for centuries been the scene of protests and occasional violence. But Wednesday’s events were particularly astounding both because they unfolded at least initially with the implicit blessing of the president and because of the underlying goal of overturning the results of a free and fair presidential election. Tensions were already running high when lawmakers gathered early Wednesday afternoon for the constitutionally mandated counting of the Electoral College results.

While the chaos raged on Washington's streets, leaders around the world condemned the storming of the U.S. Capitol, expressing shock at the chaos unfolding in a country they once relied upon for global leadership.

“Disgraceful scenes in US Congress," tweeted Prime Minister Boris Johnson of Britain, a staunch ally of the U.S. for generations. “The United States stands for democracy around the world and it is now vital that there should be a peaceful and orderly transfer of power.”

Other European allies were similarly appalled at what they described as an attack on American democracy. Some singled out Trump for harsh criticism.

“Trump and his supporters should finally accept the decision of the American voters and stop trampling on democracy,” German Foreign Minister Heiko Maas wrote on Twitter. He said that “from inflammatory words come violent deeds” and added that “contempt for democratic institutions has disastrous effects.”

European Parliament President David Sassoli, who leads one of the largest legislatures in the world, also denounced the scenes at the Capitol. The European Union has spent four cantankerous years dealing with the Trump administration, and its top officials have repeatedly said they were looking forward to a better relationship under Biden.

"American democracy is under siege; the election results must be fully respected," the EU's High Representative for Foreign Affairs and Security Policy Josep Borrell also underlined, according to remerks carried by The Associated Press (AP).

“This is insurrection. Nothing less. In Washington,” tweeted Carl Bildt, a former prime minister of Sweden.

A Turkish Foreign Ministry statement urged all parties in the U.S. to use “moderation and common sense.”

“We believe that the United States will overcome this domestic political crisis with maturity,” the ministry said. The ministry statement also urged Turkish citizens in the U.S. to stay away from crowds and demonstrations.

Israeli Prime Minister Benjamin Netanyahu said the "rampage at the Capitol yesterday was a disgraceful act and it must be vigorously condemned."

"I have no doubt that ... American democracy will prevail. It always has," added Netanyahu, who has repeatedly called Trump Israel's best friend ever in the White House.

Russian officials pointed to the storming of the U.S. Capitol as evidence of America's decline, with Konstantin Kosachyov, chairperson of the Russian upper house's foreign affairs committee, saying it showed U.S. democracy was "limping on both feet."

"The celebration of democracy has ended. It has, unfortunately, hit rock bottom, and I say this without a hint of gloating," Kosachyov said in a post on Facebook.

His counterpart in the lower house, Leonid Slutsky, said, "the United States certainly cannot now impose electoral standards on other countries and claim to be the world's 'beacon of democracy.'"