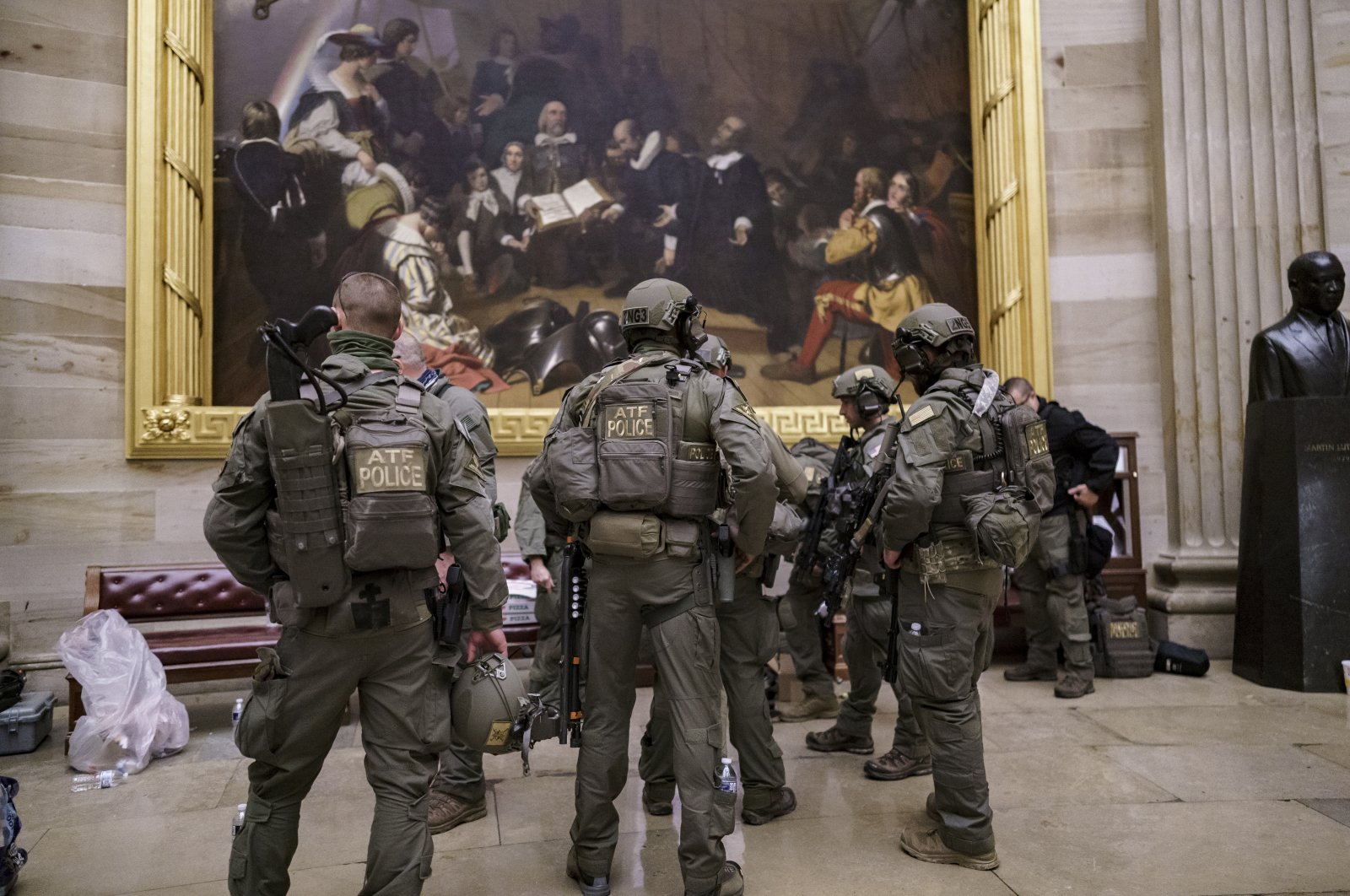 After violent protesters loyal to President Donald Trump stormed the U.S. Capitol, an ATF tactical team gathers in the Rotunda to provide security for the continuation of the joint session of the House and Senate to count the Electoral College votes cast in November's election, at the Capitol in Washington, D.C., U.S., Jan. 6, 2021. (AP Photo)
by French Press Agency - AFP Jan 08, 2021 3:29 pm
RECOMMENDED

The storming of the Capitol in Washington puts the United States in a small club with Guatemala, Armenia and Kyrgyzstan, where protesters have caused chaos by invading parliaments in the past year.

Here is a recap on the legislatures that have been attacked or occupied:

Anti-government protesters set fire to parts of Guatemala's Congress building on Nov. 21 over the Central American country's budget, in an invasion that lasted 10 minutes.

They demanded an end to cuts in health and education spending and called on President Alejandro Giammattei to resign.

Hundreds of protesters angry at the country's defeat after six weeks of fighting with Azerbaijan over the occupied Nagorno-Karabakh region broke into the parliament chamber on Nov. 10.

Scuffles broke out with police as they took the podium and shouted at lawmakers to resign.

Authorities later said they had thwarted a plot to assassinate Prime Minister Nikol Pashinian, who signed the peace deal, and arrested opposition leader Artur Vanetsyan, the former head of the security services.

Protesters smashed their way into the parliament in Bishkek and threw papers from the windows of the office of then-President Sooronbay Jeenbekov. They were furious at alleged vote-rigging in the Central Asian country's Oct. 4 elections.

The crisis saw opposition leader Sadyr Japarov being sprung from jail by his supporters.

He is now the favorite to win a presidential vote Sunday.

One person died and 20 were hurt when the West African country's national assembly and other government buildings were attacked after a big demonstration on July 10 against then-President Ibrahim Boubacar Keita.

He was overthrown in a coup a month later.

Thousands of demonstrators angry at a catastrophic blast that destroyed large parts of central Beirut in August clashed with police outside Parliament.

Dozens also stormed government ministries and the headquarters of the country's banking association.

Anti-mask protesters attempted to force their way into the Reichstag building in Berlin on Aug. 29 before being pushed back by police using pepper spray.

The clashes involving dozens of protesters – some carrying German imperial flags – came after 38,000 people marched against COVID-19 restrictions amid a social media-driven campaign against mask-wearing.

Anti-mask demonstrators fired up by social media defied a ban on mass gatherings to attack the Serbian parliament in Belgrade on July 10, pelting police with stones, bottles and flares.