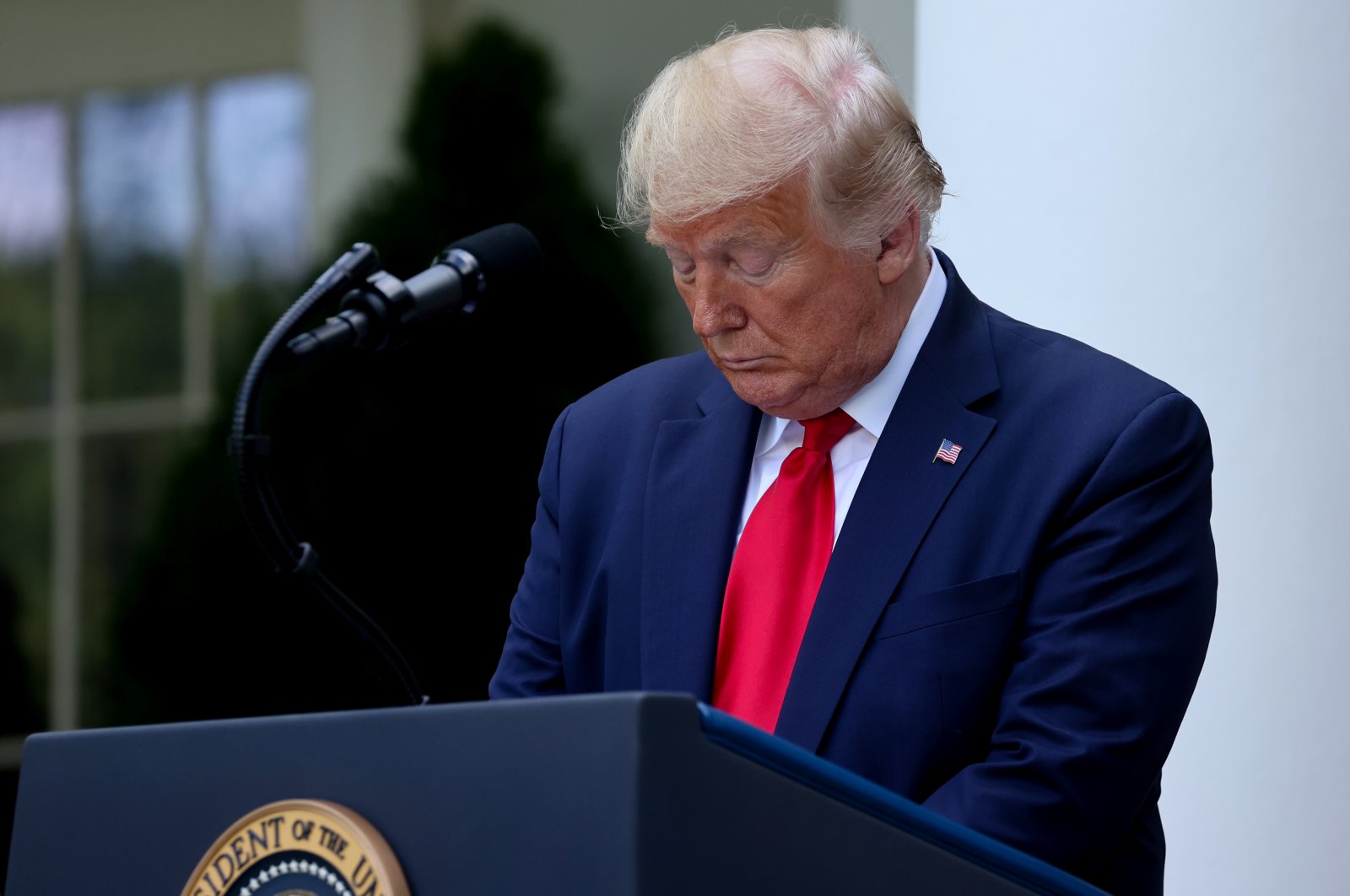 U.S. President Donald Trump speaks about negotiations with pharmaceutical companies in the Rose Garden at the White House, Washington, D.C., May 26, 2020. (Reuters Photo)
by DAILY SABAH WITH AGENCIES May 28, 2020 2:45 pm

While the coronavirus pandemic has reached a fearsome new number in the U.S., with 100,000 lives lost, President Donald Trump remained silent for a day about the grim death toll

The COVID-19 death toll in the United States reached a staggering high Wednesday night while President Donald Trump remained silent on the day of the grim milestone.

The U.S. has reported more than 100,000 deaths in less than four months, more than the number of Americans killed in the Vietnam and Korean wars combined. The actual number of deaths is thought to be significantly higher, with experts saying many victims died of the virus without ever being tested for it.

A day after the threshold was reached, he commented in a Twitter post. "We have just reached a very sad milestone with the coronavirus pandemic deaths reaching 100,000. To all of the families & friends of those who have passed, I want to extend my heartfelt sympathy & love for everything that these great people stood for & represent. God be with you!" Trump said.

President Trump several months ago likened the coronavirus to the flu and dismissed worries that it could lead to so many deaths. The administration’s leading scientists have since warned that as many as 240,000 could die from the virus.

Instead of commenting on the death toll, Trump used Twitter to attack tech companies for trying to censor him, following Twitter's move to label two of his tweets misleading. After long resisting calls to censure Trump over his truth-defying posts, Twitter on Tuesday accused the president for the first time of making false claims. Trump had tweeted, without any evidence, that more mail-in voting would lead to what he called a "Rigged Election" this November. Twitter's slap on the wrist was enough to drive Trump into a tirade, on Twitter, in which he claimed that the political right in the U.S. was being censored.

Still, optimism over reopening economies from business shutdowns to fight the virus spurred a rally on Wall Street. In New York, the state with the highest death toll from the virus, Gov. Andrew Cuomo said it was time to focus on relaunching New York City’s moribund economy.

After ringing open the New York Stock Exchange's trading floor for the first time in two months, he laid out a plan that included accelerating major infrastructure projects and tackling the transmission of the virus in the hardest-hit neighborhoods. Cuomo reported a one-day total of 73 deaths on Tuesday, the lowest figure in months. “In this absurd new reality, that is good news,” he said.

In many parts of the world, outbreaks are still climbing. Many countries in Asia and much of Europe are making steady progress in containing the deadliest pandemic in a century. Worldwide, the virus has infected nearly 5.6 million people and killed over 350,000, according to a tally by Johns Hopkins University. Europe has recorded about 170,000 deaths.

The World Health Organization said that the world remains mired in only the first stage of the pandemic, putting a damper on hopes for a speedy global economic rebound. "Right now, we're not in the second wave. We're right in the middle of the first wave globally," said Dr. Mike Ryan, WHO's executive director. "We're still very much in a phase where the disease is actually on the way up," Ryan said, pointing to South America, South Asia and other parts of the world.

In the Americas, from Mexico to Chile, health officials were reporting surging coronavirus cases and overwhelmed hospitals. Mexico’s health department reported 501 deaths from the coronavirus on Tuesday, a new one-day high, and 3,455 more infections. Its daily death toll is approaching that of the U.S., at about 620.

Brazil currently leads in daily deaths with more than 800. Brazil has about 375,000 coronavirus infections – second only to the 1.6 million cases in the U.S. – and has counted over 23,000 deaths, but many fear its true toll is much higher.