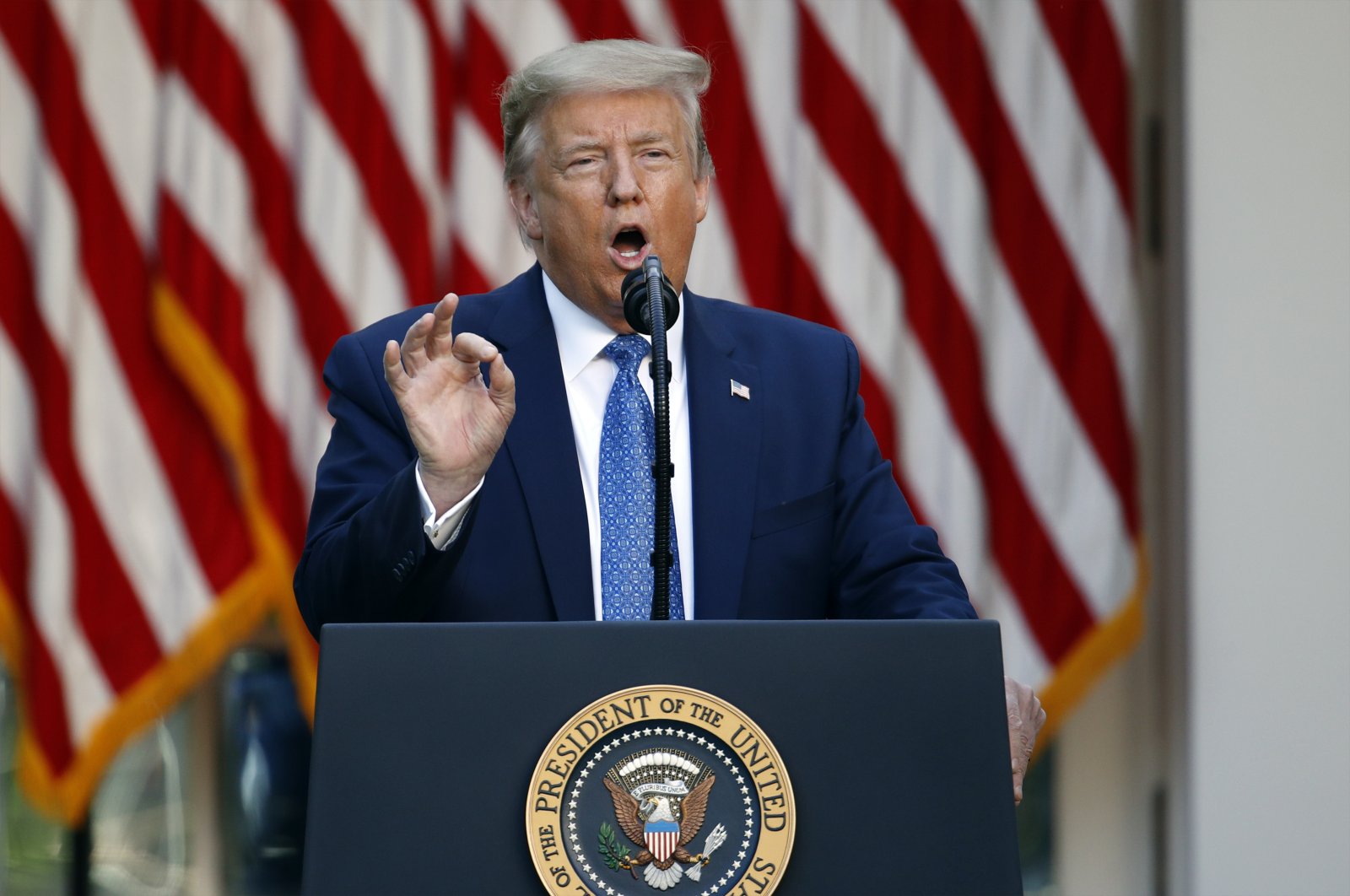 President Donald Trump speaks in the Rose Garden of the White House, Monday, June 1, 2020, in Washington. (AP Photo)
by DAILY SABAH WITH AGENCIES Jun 02, 2020 1:50 am
RECOMMENDED

U.S. President Donald Trump on Monday described looting, violence and attacks on police during nationwide protests of George Floyd's death as "domestic terror," urging governors to deploy the National Guard and threatening that he will deploy the military if they decline to do so.

He slammed protests in Washington in which some properties and monuments have been vandalized as police struggled to disperse crowds.

"What happened in the city last night was a total disgrace," Trump said. "As we speak I am dispatching thousands and thousands of heavily armed soldiers, military personnel and law enforcement officers to stop the rioting, looting, vandalism, assaults and wanton destruction of property."

Trump said he is an ally of peaceful protesters, but he stressed that “I am your president of law and order.”

He said a 7 p.m curfew will be strictly enforced in the capital, drawing the ire of media and social media users for his announcement that came only 10 minutes earlier.

Largely peaceful protesters at the Lafayette Square near the White House were repelled with tear gas and mounted police on Monday as Trump spoke in the Rose Garden, live televised images showed.

As Trump spoke, an incredible TV split screen developed around the White House. While he addressed the nation in the White House's idyllic Rose Garden, a series of military vehicles rolled out front on Pennsylvania Avenue and military police and law enforcement clashed with protesters at Lafayette Park.

Loud tear gas explosions could be heard as authorities moved what appeared to be peaceful protests in the park. The escalation came just after Attorney General William Barr came to the park to to survey the demonstrators.

Right after his speech, Trump left White House grounds on foot, crossed the square and visited the historic St. John's Episcopal Church, which suffered minor damage from a fire that had sparked in recent protests on May 31.

Beginning with James Madison, every person who has held the office of president has attended a service at the church, which was inaugurated in 1816.

Holding a Bible, he then stood with several of his Cabinet members as the cameras clicked.

“We have the greatest country in the world," Trump declared. “We're going to keep it safe."

According to senior defense officials, between 600 and 800 National Guard members from five states were being sent to Washington to provide assistance. Those troops were either already on the ground or will arrive by midnight.

Under the Civil War-era Posse Comitatus Act, federal troops are prohibited from performing domestic law enforcement actions such as making arrests, seizing property or searching people. In extreme cases, however, the president can invoke the Insurrection Act, also from the Civil War, which allows the use of active-duty or National Guard troops for law enforcement.

The officials said that some of the National Guard in D.C. will be armed and others will not. They said that the D.C. guard members do not have non-lethal weapons. The military police that are visible in the city are members of the Guard.

Trump's remarks came as the protests entered their seventh day across the nation after Floyd, an unarmed black man, died on May 25 in Minneapolis, Minnesota after being pinned to the ground by a white police officer, Derek Chauvin, who appeared in multiple videos of the arrest to hold his knee to Floyd's neck for 8 minutes and 46 seconds despite his pleas that he could not breathe.

Those pleas ended when Floyd appeared to lose consciousness, but Chauvin continued to maintain the position on Floyd. He died shortly after being taken to a hospital. Chauvin was charged with third-degree murder and manslaughter.

Floyd was killed by "asphyxiation from sustained pressure," an independent autopsy found Monday.