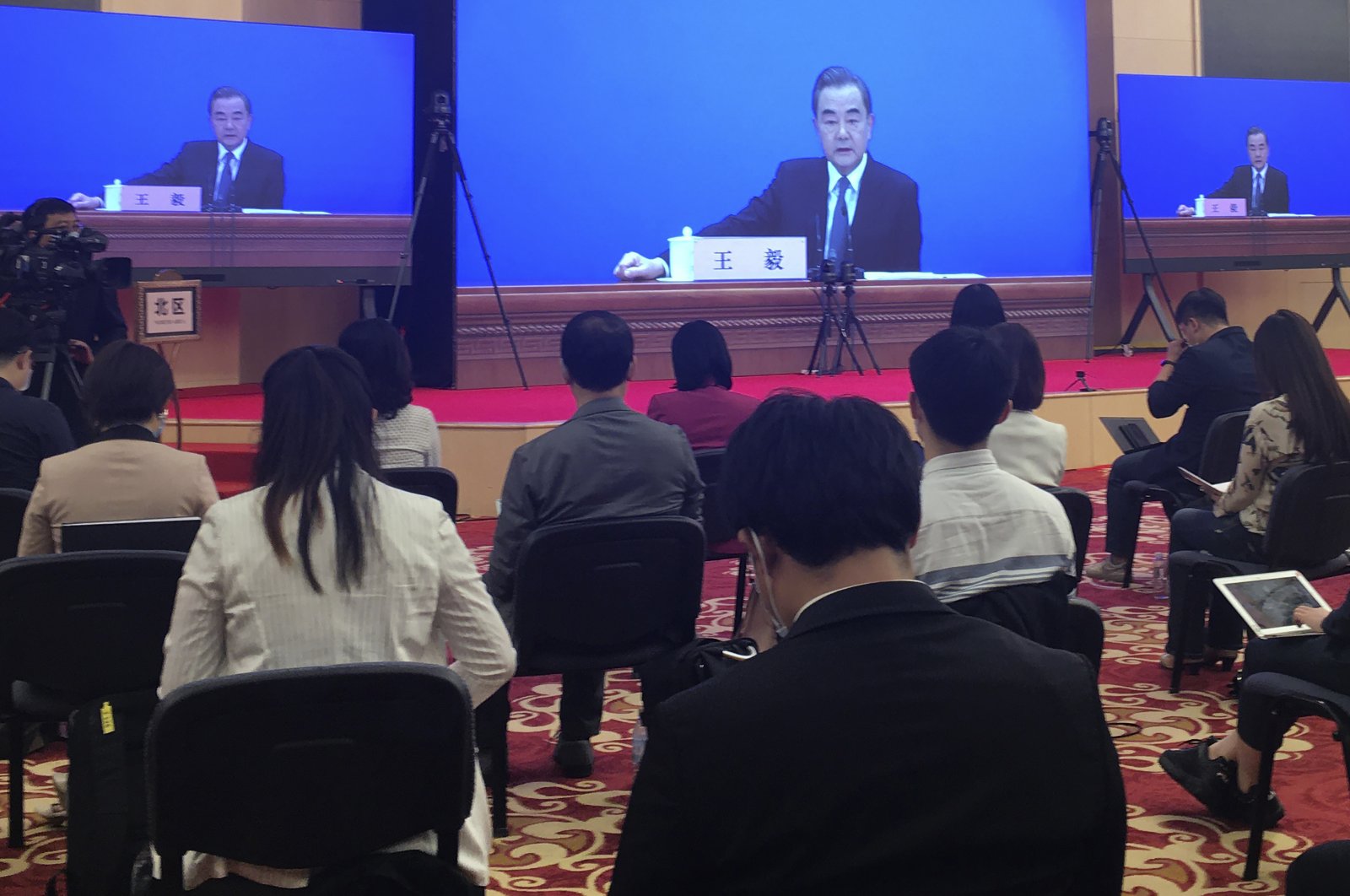 China's Foreign Minister Wang Yi is broadcast remotely on big screens during a press conference on the sideline of the National People's Congress, Beijing, May 24, 2020. (AP Photo/Ken Moritsugu)
by French Press Agency - AFP May 24, 2020 3:50 pm
RECOMMENDED

The United States is pushing relations with China to "the brink of a new Cold War," China's foreign minister said Sunday, rejecting Washington's "lies" over the coronavirus while saying Beijing was open to an international effort to find its source.

Keeping up the worsening war of words with Washington over the pandemic and a Beijing move to tighten control over Hong Kong, Wang Yi said the United States had been infected by a "political virus" compelling figures there to continually attack China.

"It has come to our attention that some political forces in the U.S. are taking China-U.S. relations hostage and pushing our two countries to the brink of a new Cold War," Wang told reporters during a press conference at China's weeklong annual parliamentary session.

Longstanding friction between the two powers over trade, human rights and a range of other issues have been pushed to new heights since the virus outbreak.

Wang did not identify what "forces" he was referring to, but U.S. President Donald Trump has led world criticism of China's initial response to the pandemic, which has caused more than 340,000 deaths and economic carnage worldwide.

Trump and members of his administration have said China covered up the emergence of the virus late last year and bungled its initial response.

Washington's criticism has been widely seen in the United States as an attempt by Trump to divert attention from the White House's own COVID-19 failures.

Wang took an apparent swipe at the U.S. struggles to contain the virus, which has now infected more people in the United States than anywhere else.

He said China was "open" to international scientific cooperation to identify the source of the coronavirus but stressed that any investigation must be "free of political interference," based on science and led by the World Health Organization.

The WHO has called on Beijing to invite the U.N. body to investigate the source, but Wang did not indicate if foreign scientists would be invited to come to China.

"Some political figures in the U.S. rush to label the virus and politicize its origins, stigmatizing China," Wang said, adding that an investigation must "oppose any presumption of guilt."

Most scientists believe the virus jumped from animals to humans after emerging in China, possibly from a market in the central city of Wuhan where exotic animals were sold for meat.

Governments including the U.S. and Australia have called in recent weeks for an investigation into the exact origins of the virus.

China has proposed instead that the "global response" to COVID-19 should only be assessed when the pandemic is over.

WHO members on Tuesday adopted a resolution, tabled by the European Union, at the U.N. body's first virtual assembly to review the international handling of the pandemic, but it does not single out China.

"Aside from the devastation caused by the novel coronavirus, there is also a political virus spreading through the U.S.," he said.

"This political virus is the use of every opportunity to attack and smear China. Some politicians completely disregard basic facts and have fabricated too many lies targeting China and plotted too many conspiracies."

The introduction at China's legislature on Friday of a proposal to impose a security law in Hong Kong to suppress the semi-autonomous city's pro-democracy movement also has drawn U.S. and world condemnation.

But Wang defended the plan, saying it must be implemented "without the slightest delay," adding that months of often-violent Hong Kong protests last year against China's growing influence in the financial hub had "seriously endangered China's national security."