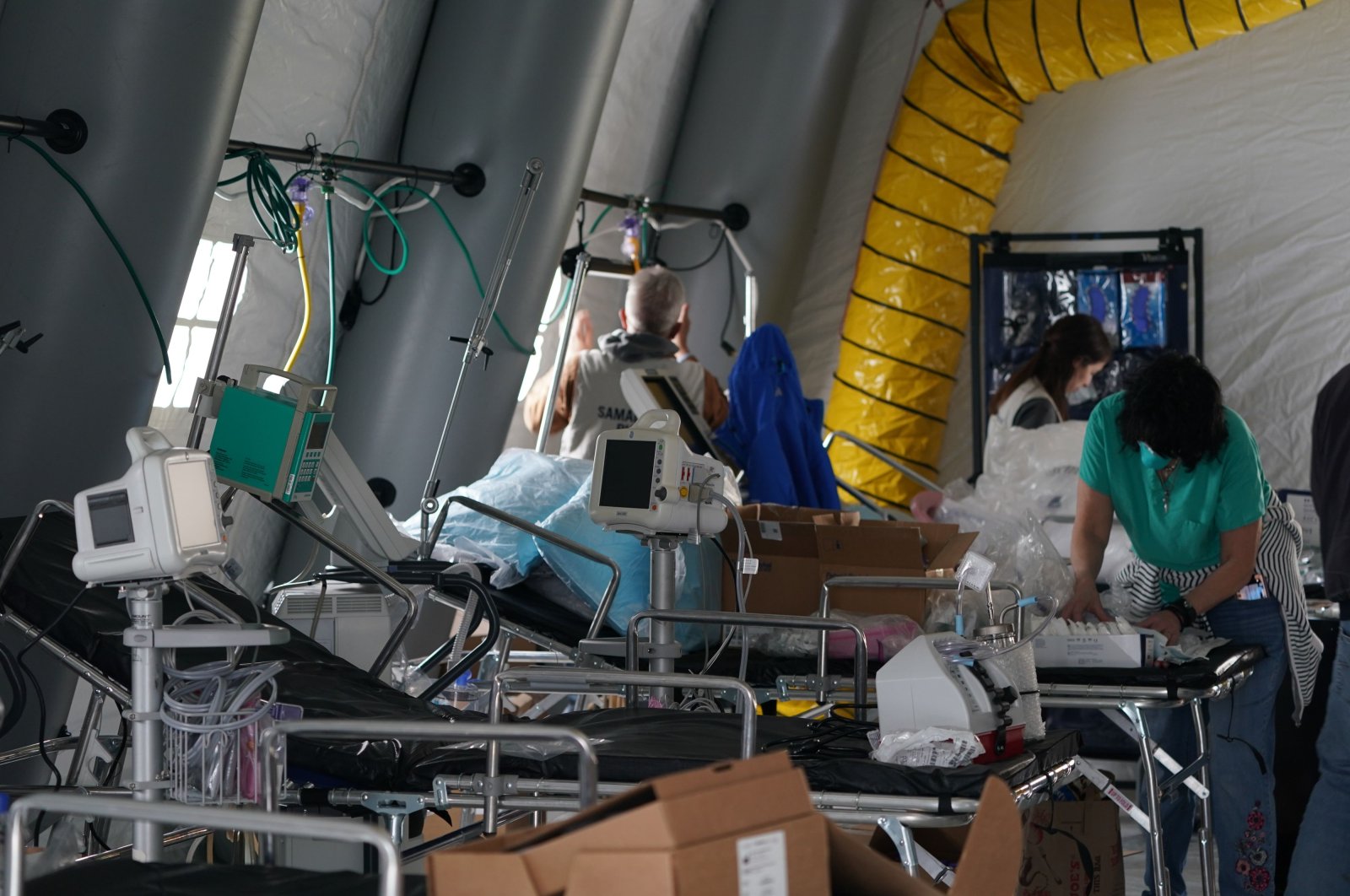 Medical supplies and beds are seen inside a tent as volunteers from the international Christian relief organization Samaritan’s Purse set up an Emergency Field Hospital for patients with COVID-19 in Central Park across Fifth Avenue from Mt. Sinai Hospital on Monday, March 30, 2020, in New York, U.S. (AP Photo)
by DAILY SABAH WITH AGENCIES Apr 05, 2020 11:17 pm
Edited By Nurbanu Tanrıkulu Kızıl
RECOMMENDED

The global coronavirus pandemic has not only brought countries struggling to secure necessary medical supplies, but it has also brought the state governments against the federal government in the United States. The state of Massachusetts has recently questioned why the Trump administration seized at least two such shipments.

“Trump told states they were on their own to purchase medical equipment, so that’s what MA tried to do. But then the federal government outbid MA at least 3 times – and reports show two of our orders were seized by federal authorities. This is unacceptable,” Sen. Elizabeth Warren said on Twitter.

The senator noted that Gov. Charlie Baker recently had a phone conversation with President Donald Trump, who told governors to obtain ventilators and other equipment directly from manufacturers rather than relying on the national stockpile.

"Massachusetts state officials are continuing to face federal impediments as they scramble to find essential medical equipment to respond to a public health emergency. This is unacceptable," Warren said.

With the federal stockpile dwindling fast, and the Trump administration limiting access to what’s left, state leaders are going to extraordinary measures on their own to secure faces masks, ventilators, gloves and other equipment essential to fighting the outbreak.

They’ve ventured into a global marketplace one governor described as the “wild, wild, West,” only to compete against each other and their own federal government. They’ve watched the price of ventilators double and masks go for 10 times their original price. They’ve turned to rich friends and businesses for help. Massachusetts Gov. Charlie Baker enlisted NFL owner Robert Kraft to send the Patriots team plane to China to retrieve over a million masks.

In New York, an epicenter of the outbreak in the U.S., Gov. Andrew Cuomo has looked closer to home to secure ventilators, issuing an order that forces even private hospitals to redistribute ventilators to the hospitals most in need.

“Let them sue me,” Cuomo said.

All this has led many governors to call on the federal government to centralize purchases. But President Donald Trump has not appeared inclined to intervene in the private market. And the White House made clear this week that Trump views the federal stockpile as a “backup” for the states.

“It is the greatest frustration,” said Maryland Gov. Larry Hogan, a Republican who heads the National Governors Association. “We have states out competing on the open markets with totally uneven distribution of these things, and now the federal government competing with us – and other countries competing against us – and then a very limited supply of all of these things and no real coordination of where it’s going.”

Hogan said there has been progress from the Federal Emergency Management Agency (FEMA) distributing supplies from the nation's dwindling stockpile, but he described it as a “tiny percentage” of what is needed.

“We’ve been buying up everything that we can possibly get our hands on in the open market all over – not just domestically, but all over the world, from places like Korea and China and other places,” he said.

It's not just governments competing with each other for the precious and ever-pricier supplies. States also sometimes compete with their own hospital systems, which are trying to get direct shipments so they can quickly resupply their medical workers.

Hospital employees like Dr. Daniel Durand, a physician and chief innovation officer for a hospital system in Maryland, now have a role they never imagined trying to find personal protection equipment in a market gone haywire.

As just one example, Durand said coveted N95 face masks that used to cost less than a dollar each can't be found for less than $3.70. And that's a bargain: Plenty of buyers are willing to pay much more – up to $10 apiece.

He said some middlemen threaten to take their products to another hospital when he starts asking basic questions.

“And then what I’m hearing is that people are paying millions for shipments and nothing’s showing up," said Durand, who is the chairman of radiology for LifeBridge Health's five hospitals. "So, there are just totally people scamming hospitals.”

Virginia Secretary of Finance Aubrey Layne vets suppliers for that state's medical gear and said they have to deal with people with questionable qualifications, and with little time to determine whether they are qualified or trustworthy.

Earlier this week, Trump acknowledged that the federal stockpile is nearly depleted, signaling that states will remain largely on their own just as the death toll begins to spike. Many governors have been complaining for weeks that they have not received the shipments they requested from the nation's supply.

Middlemen and suppliers are taking advantage of the desperation: Smaller ventilators that had been selling for $11,000 to $14,000 are now going for $20,000 to $30,000, said Christian Mitchell, deputy governor in Democratic Illinois Gov. J.B. Pritzker’s administration. More deluxe models that had topped out at $45,000 now cost $20,000 more.

“Your choices are between, ‘Do I get enough of the stuff that I need to protect my front-line health care workers, do I get enough ventilators to make sure that more people get to stay alive. Or do people die?’” he said.

Big states like California have an advantage because their sheer size gives them massive purchasing power that others lack. California Gov. Gavin Newsom says he doesn't want that leverage to hurt smaller states and has reached out to Washington, Illinois, New Jersey and others about creating a partnership to centralize their purchases.

“Much of what you’re hearing is true in terms of it being the wild wild West out there,” Newsom said.

Small states, like New Hampshire, are at a disadvantage.

“If it’s just going to be this sort of Darwinian free-for-all, like ‘Lord of the Flies' ... I don’t know what to say. It’s absolutely unconscionable. It’s unimaginable that this is where we are at right now," he said.

Some states are working with private manufacturers to convert buildings so they can produce their own medical equipment.

LifeBridge Health is among those taking matters into its own hands.

It converted a building in the Baltimore suburbs into a factory to produce masks. LifeBridge’s head of oncology, who sews, trained 40 staff members how to make the masks, said Durand, the radiologist.

“It’s like a half sewing factory, half surgery suite,” he said.

The number of people infected in the U.S. has exceeded 300,000, with the death toll climbing past 8,400; more than 3,500 of those deaths are in New York state, including more than 1,900 in New York City. In addition to getting ventilators from China and Oregon, Cuomo ordered private hospitals in the state to redistribute breathing machines to those most in need.